For this project, in the beginning I learned about the different triads of colors which are CYM (Cyan, Yellow, Magenta), RGB (Red, Green, Blue) and RYB (Red, Yellow, Blue). Also I learned about the different levels of saturation for color which are chromatic, muted and prismatic. Mainly the tasks were to make broad and narrow range collages using each level of saturation. At first getting the colors down was pretty difficult because you had to be careful with how much of the complement color you add in to change the saturation. I was very scared of the paint running out in this project. Another fear was making the exact shade of color when I ran out of it. I thought using paint in this project would be a bit easier because in the previous project we used paint. As a matter of fact it was harder because of mixing all the different colors. I find for this project I really need to improve my craftsmanship because the paint didn’t come out as smooth as I wanted it to. The next task was to make a swiss style poster which I found to be pretty simple because at that point I got a better grasp behind the concepts of the saturation levels. The next project I don’t really know what to expect which is pretty exciting because I’ll be learning something new. Hopefully I can use what I learned from this project and previous projects for the next one.

pre·req·ui·site noun, adj.
pronounced: (prēˈrekwəzət/)
Something that’s necessary and required prior for something else to occur.
I first heard of this word when I had attend the registration workshop. I also learned about it there. But last week during English class, the term had also came up when Prof. Rosen quickly mentioned classes and registration. Some classes are needed before others is what this means in college terms.

The average person often finds theirselves living in a routine. Whether it’s school, work, family etc, humans all have liabilities. Having very little leisurely time can seem to become a burden on many. But in a time of need, Right Route offers the foundation for a vibrant happy day. Using information on your current mood, Right Route incorporates time, visuals and distance to create an overall goal which is happiness and relief from daily troubles.

Today’s focus is on students. Students on a daily are significantly focused on taking the fastest route. Due to choosing the fastest route, environmental factors become muted out but with an extra ten to fifteen minutes the experience can become breath taking. A student who everyday walks from Jay Street Metro Tech train station to City Tech is only geting a block’s worth of what this world has to offer. That is when Right Route will suggest a peaceful naturalistic walk from Carroll Street to City Tech.

Beauty, the quality of being physically attractive is something that the user will encounter after they downloads this app. My co-workers and I, Ayano Morishima are making an route simulator known as “Road to Beauty” that takes the user to a journey that can lead them to a beautiful constructed location. Many people uses other apps to locate their shortest and fastest route, so that they could get to their location much faster. Taking a different walk from your usual course of route would open your view on beauty after downloading this app, which it contains features of short, fast and beautiful route.

Many apps from the apple store contains route simulator that pinpoints to the users location and calculate time to show them different option in best or shortest route to get there quickly as possible. However, is it time that the users want to save up to get to their destination? Sure, people want to get there quickly and do whatever they needed to do. But what if there is an app that can change the users surrounding views? Think about it, looking at the same route over and over is boring. The user might already know whats built there, even if they are blind! Our app focuses on people’s daily route and time, however what is different is users can use this app to encounter a beautiful constructed location just by taking a different route. Simple right? By changing just a little routine of using the same route to their destination; even if it takes just an extra few minutes, sure the surroundings of the users view will changes. Peter Terzian states that “The Heights wears its rich history on its sleeve, with the area a showcase of stately architectural styles, august churches and schools and literary landmarks.” Basically, the author is saying that there is a lot to see at the Brooklyn Heights. Such as churches, beautiful architecture, school, etc. Its beauty captivates people hearts and its amazing location with in Brooklyn heights conveys the inner beauty in Brooklyn.

One of the ongoing project route starts from the Voorhees building. This building is a center for engineering technology for students who does to NYC College of Technology. Once you left the building to make a right, you will see a big road. If you turn right again, you would encounter an entrance of Brooklyn Bridge. Brooklyn Bridges connects the two boroughs, Manhattan and Brooklyn crossing over the East River. As you go further straight, you will see a huge park called, Cadman Plaza Park. A huge park where you can play any sports. Walk to right and left again, where you will encounter location called, Brooklyn Heights Promenade. As you go in though this location, and keep walking straight, you will see a Brooklyn Bridge Park Pier 2. Place where it features in basketball, handball, etc. Each locations shows the beauty of each aspect in how it was constructed for. For example, since the Voorhees building was built unique, which it intrigues people who are interested in architecture or simply how different they are. Also, Brooklyn Bridge Park Pier 2’s building is constructed beautiful, because of the surrounded body of Hudson river and the view of the sky scrapers of Manhattan. Ronda Kaysen states that “As it is, many preservationists worry that Midtown could soon reach a tipping point in which the architectural mix of old and new is lost to a wash of sparkly glass.” Basically, the author is saying that not only in Manhattan, but other boroughs such as Brooklyn architecture are in need to keep an eye out. Soon or later it would be demolished without knowing.

These exampled location is a place where the users will encounter in the app. Such as the caption below will pop up to explain a little information that the user could do, when they arrive at certain locations. Many volunteers contributed to this route making, so that it shows the best time to go to the location, where it also shows the “best time” to go to the location at the top right corner. An example for the location above is, “the best time to go to the location” is between 2:30pm to 5:30pm. One of the volunteer commented, “It is a great place to go, especially since it is quite. You can see how each location are constructed differently comparing it to other locations. Going with friends or family would be a great way to explore a new route!” Thanks to our volunteers, this app does contain other features, such as little game that satisfies the users traveling, voice active system where you use it like Siri, time countdown where it countdowns time to get to the location. The article of The Adventure of a New Perspective: A Literary Walk in Brooklyn Heights states that, “Brooklyn Heights still retains a sense of dignity and quiet, the legacy of a residential neighborhood that was famous in the nineteenth century for its churches and for its elegant homes built by merchants and sea captains in the shipping trades.” Basically, the article is saying that Brooklyn Heights is the best place to go and explore about the legacy of a residential neighborhood and the beautiful scenery that smooths people heart.

Seeing different surroundings would motivate users to look though into new route to their destination, where they haven’t discovered yet. By using this app Road to Beauty, not only they gives the best option in shortest route, but to think about the user’s preference in showing beauty of how the location was constructed. Many people looks for quick way to get to the destination that they are seeking. However what if there is a route that is short and beautiful enough to make you use this app again? Why won’t you not give it a try? 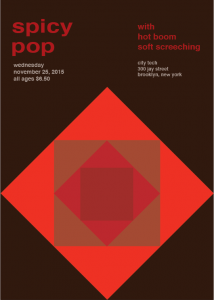 For this phase I was out in TK and Ashley’s group, we had to make a poster that follows 3 cards that was assigned to our group. We had to make a title that was a cross-sensory metaphor. In other words using, words that involves the senses of the body such as touch, taste smell, etc. For our title we used the sense of taste and sound which is “spicy” and Pop Our main primary color had to be a warm color, so we went with red. We went with a bad religion style for our composition. This poster took 3 hours to complete.

Please write a private post to share your thoughts as you ordinarily would in class on paper for the cover letter, and on the site for the process post.

To make your post private when you write it, click on Edit next to Visibility in the right sidebar, and choose Private instead of Public or Password protected.

In combining both letter and process post, please write about the following:

Please categorize your post as ENG 1101 Project #3, and use the tag Phase 4: Deliver, plus any additional tags you find useful.

I encountered this word from one of someone’s bibliography: ” Fruit Street Sitting Area”. In my understanding to this word, this word has kind of same meaning as madness or angry, instead of these two words, I’ll try to use “vehement” next time.

I encountered this word from one of someone’s bibliography: ” The Advantages of a New Perspective: A Literary Walk in Brooklyn Heights”. I know “illuminate”, but never heard about “illuminati”. Most people don’t know this word because this is not a universal word, so I put it as one of my glossary to let more people learn the meaning of it.