This article gave me a great feeling of those people who invented airplane. Aircraft for society now is just an ordinary transportation for people to traveling from a place to place. This article made me comprehend the difficulty of making the aircraft，from the beginning of invention until the moment of seeing it flight into sky. Many difficult problems were out during processed the aircraft, as compared the past and modern technology there were a big difference. So it was difficult to invented a aircraft during that period. They have to deal with thermodynamics, and the swarm of preoccupied draughtsmen tackle their work. But in the end they still invented. I admire their perseverance and teamwork，the moment the airplane took off makes me the great sense of accomplishment. I learned a lot from this article. As long as there is determination to do something it will succeed.

Comment on: Wind, Sand and Stars “The Tool” by Antonie de Saint- Exupéry

The Wind, Sand and Stars “The Tool” by Antonie de Saint -Exupéry, tells the reader how design is not to only to add, but to take away as well. This sentence from the chapter “to refine the curve of a piece of furniture, or a ship’s keel, or the fuselage of an airplane, until gradually it partakes of the elementary purity of the curve of ‘a human breast or shoulder…”, shows that there are elements that are necessary to make an object function to achieve its purpose. It connects to our graphic design principle and our everyday life, because in drafting it will take many hours and it will not be complete if elements are missing from the objects. The key is to start with something simple where you can go back and change. It will eventually take you another step closer to the finish line.

Caramel Candy Wrapper: I found this artifact in front of the City Tech main entrance. Someone must have been eating the candy before going into the building and just threw it on the sidewalk. The wrapper is kind of crumbled but wasn’t ripped open. The shape of the wrapper might be organic.

Green Candy Wrapper: I found this second artifact at the corner of Tilary Street.  The candy wrapper is small and has Chinese writing on it. It’s also opened in the back. A person must have wanted something to snack on while going somewhere. While opening the candy they probably dropped it without realizing. The shape of it is a geometric shape.

Green Stick: I found this third artifact in front of a gas station. I’m not sure what is it exactly, but I’m guessing it’s a stick you mix your coffee with. It’s dirty and looks like it’s been stepped on. While filling up their car with gas, the person probably bought a cup of coffee while waiting. When they were done with it, they just threw it on the ground. The shape of the stick is a geometric shape.

Sketches: The each of the sketches took around 10 minutes 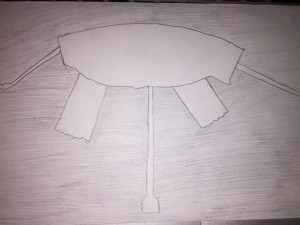 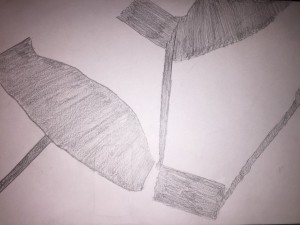 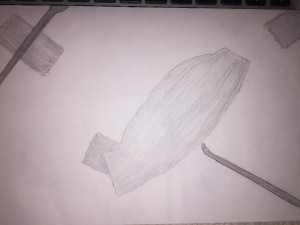 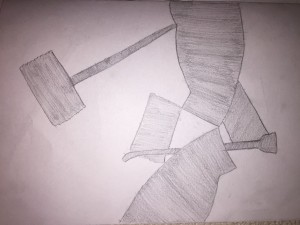 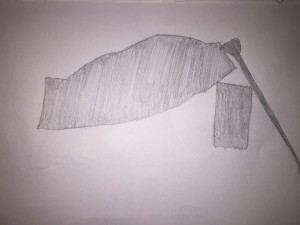 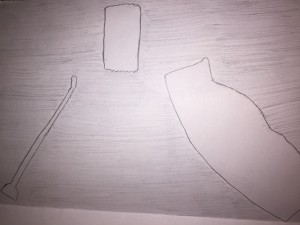 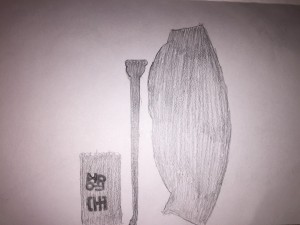 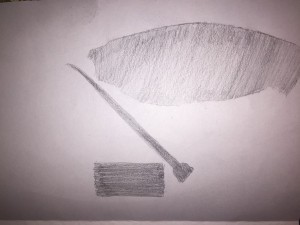 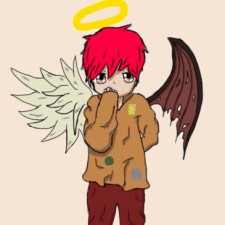 Ruky’s avatar caught my interest because of the evil wing that is mixed in with the soothing vibe that I get from the rest of the picture. Without the evil wing I would think he’s just a shy, nice, calm person. Now add the evil wing in and it sparks an idea of there’s more to his character than from what I’ve just mentioned. That wing kind of gives off a mysterious feeling to his character. The hair color being red also adds on to his personality. Red is a color that is usually associated with passion so he probably has passion within him. Usually shy people are just seen to be shy and nothing else but over here there is more.

When I read Ruky’s biography he didn’t really go into detail of the kind of personality he has. The one interpretation I can get from his bio is that he’s passion is most likely linked to his interests. By the things he’s interested in he seems like a pretty cool guy.

1. to move in one direction and then back again many times

2. to keep changing from one belief, feeling, condition, etc., to an opposite one

3. to change in strength or direction regularly

I’ve come across this word from the reading expert Wind, Sand and Stars “The Tool” by Antonie de Saint -Exupéry. I picked up this word from this sentence, “The indicators that oscillated on the instrument panel warned us of a thousand dangers.” Because it connects to our graphic design principle and our every day life. To achieve, we have to put our efforts in. Just like drawing, drafting will take hours to reach its final completion. The key, to this sentence is to start with something simple which you will go back and change. It takes you another step closer to the finish line.

I took  journey through my backyard to find these objects because I wanted to find something organic and natural. I found three very different objects that are texturally different from one another. The first is a white smooth rock about the size of a ping pong ball. The second is a short twig that has interesting flower-like buds on the end of two stems that branch out. The last is a withered weed flower stalk that is full of tiny leaves and small purple flowers/buds. I feel that these objects really complement each other really well and work nicely together which is why I chose them.

An hour to hour and a half.

one that propels; especially : a device that consists of a central hub with radiating blades placed and twisted so that each forms part of a helical surface and that is used to propel a vehicle (as a ship or airplane)

I encountered this word from the following reading “The Tool”. It appear on the line said “Under the dizzying whirl of the scythe-like propellers……”. I now understand a propeller basically means the whirl device on a ship or airplane. 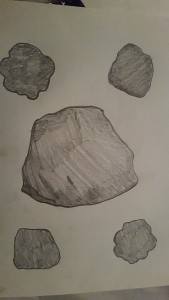 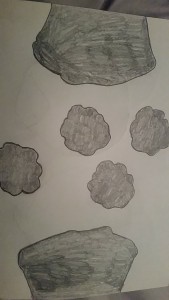 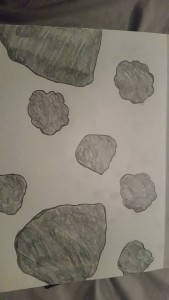 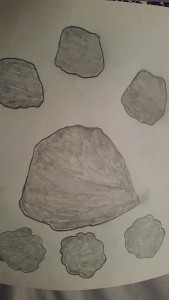 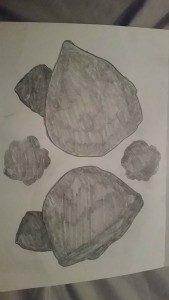 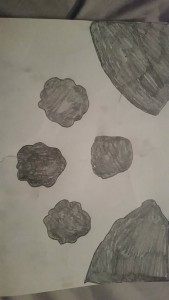 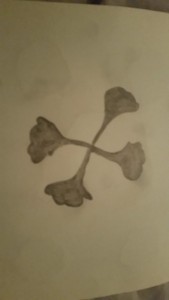 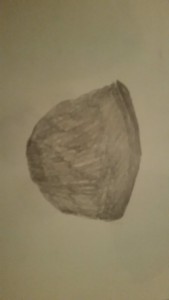 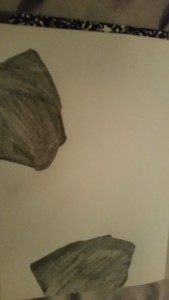 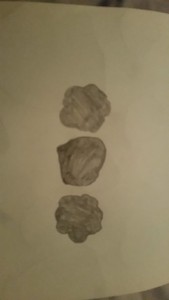 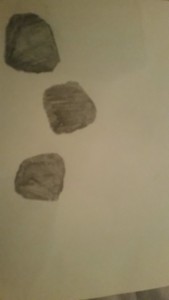 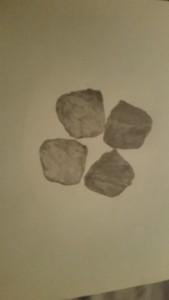 I found the trip yogurt container on Tillary Street. It was compressed or flattened and a little dirty when I found it but it still has those bright beautiful colors on it. a child or a man/woman must’ve been eating this for a snack and when he or she was finished with it they didn’t wait till they found a garbage to throw it away and thats how it ended up on the ground.

This piece of concrete i found on the corner of Jay street and Tillary Street it was next to a sign i think the sign might have been a bus stop but not to sure. Since there is construction going on something must have happened to make the piece break off from the ground.

I found a flower on Myrtle ave and Flatbush but i did not use it to trace on my paper because i was unable to use that one do to the fact that it died while sitting in the bag for so long. So on the way home that day i picked up a flower that looked similar in shape and color.

My initial interpretation of Phoenix’s avatar is that he loves music in general. I am familiar with this being an old Apple I-pod advertisement and there is an I-pod in the image therefore concluding music plays a significant role in this person’s life. Im also guessing this person’s favorite color is green just for the simple fact that these ads come in a variety of colors and dance positions but to specifically pick green i think that there’s some relevance. In all, it’s a very symbolic photo.

After reading Phoenix’s bio, I can justify that I was correct on the part that music plays a big role in this person’s life. Phoenix is very much into hip-hop and rap which is where the ipod comes in. It symbolically stands for his interest in the music culture. Phoenix says he sometimes draw rappers and can even have full out conversations soley on that topic. Being a person who’s into design, i can also view how this graphic relates to him. Yes its a simple silouette but there is a very effective strategy to it. For example, the contrast between the figure and the background and the contrast between the figure and the ipod. In addition, colors play a humongous role on emotions and psycology of others so i feel as if this clearly represents who phoenix is as a person and i love the icon that was chosen. Simple yet very much straight to the point. 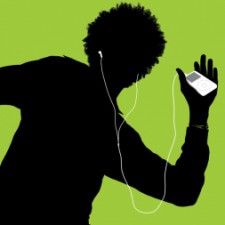