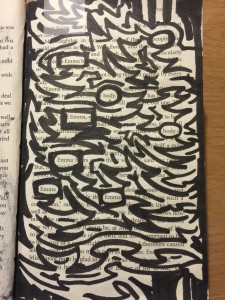 In this work, Cobena integrates heavy ambiguity into a simple idea; A representation of the idea of “victims” being laid out. Set up as a black and white composition, the author lays out names of the characters in the original work, randomized throughout the page, and using a staccato pattern to separate them as ambiguously as possible. This gives the viewer a mental image of a sort of “crime scene”. 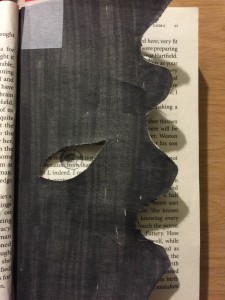 This particular composition stands out among the rest, both literally and figuratively. Composed of two pages, rather than just one, Cobena creates a distinct relationship between these two pages within the composition using an overlap of them. One image is not complete without the other, and together they juxtapose to create a single picture, consisting of a dark and morbid appearance intended to give the viewer a feeling of interested dread. 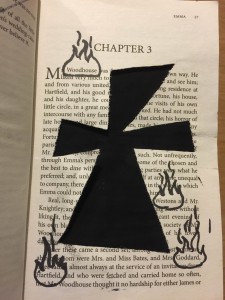 Here Lies Her Sins was  intended by the author to represent the idea of an unholy deed. Though without speaking that of which could be said action. Using an overlap of two pages within the book, they alter into one composition. The contrast of the bottom layer make the image of a cross, which is given the focal point in said composition. Cobena also uses images of fire to highlight a “list of possible victims” within the composition.

In this piece Santiago tries to convey a sound wave to go along his learning of staccato and legato sharp and soft sounds conveyed in a drawing. Santiago’s piece shows his way of seeing a staccato or sharp sounds in his drawing of “The Beat”.

In this piece of work Santiago shows different variety in this case there are a lot of triangles but not a;ll the same sizes, so the variety is shown by all the different sizes and positions of all of the triangles which to him looks like flakes falling from the sky.

This exhibit is presented by Ayano Morishima. Born and raised in Tokyo, Japan, then moved to New York where she now lives and studies. Tom Phillips, an English artist who set a task himself to find a second-hand book for altering every page by painting, collage, and cut-up techniques to create an new pieces of art, called *Humument. Understanding Phillips’ concept behind his creative art work, Morishima combined different techniques she learned from her *Graphic design principle 1100 and English 1101 class to create a humument book. She changed the theme of the book, Wishes to a crazy wonderland theme to show completely different side of wonderland. She also got ideas from the origin of the story, Alice’s Adventure in Wonderland by a English author Charles Lutwidge Dodgson under the pseudonym, Lewis Carroll in 1865. She used her technique in using ink brush pen, *x-acto knife, old book and folding to show the viewers, the new kind of story that unfolds. For the first design, Morishima used the ink pen brush to make many repetition of connected diamonds to indicate a chandelier, blocking out most of the text in the book to show how visible text are connected to the picture that is shown as a ground. In addition, using figure and ground technique to show the viewers where exactly to see; in her case, the shapes of the ground shows more vividly since the black ink, the figure blocks out other context. For the second, she used x-acto knife to cut open a block of text at the bottom of the page and glued only in the middle. By doing this, she wants the viewers to show there is a book in a book. Same as the first design, she used the technique of figure and ground, showing the ground to block other context with the figure. In addition, by folding the corner to the right top, it shows the next design that shows the technique of a *chromatic gray that Morishima learned. Down into the rabbit hole, it leads the viewers to go though the door to read a little book that came from the concept of the original. For her last design, she created the after math of Wonderland. The madness in wonderland was finally came to the end; still in the land, the ballerina indicates the beautiful dream that it stabilizes the wonders in the wonderland. Many would think that the ballerina could be Alice, however it is not necessary that the ballerina indicates Alice, since her being is the character in the original story, which is completely different from Morishima’s humumet art. She also used ink brush pen to create curtains on the right and left sides to show that she is on a stage, and other words that fits with the concept of the page, such as dancer, moment, felt, perfect, and choice. Morishima, made this humument to attract people who are interested in creating their own story. It conveys though out each pieces of art work and detailed design, where it tells the message in the theme. Single page contains a message where Morishima’s story that she made though out the humument art, she wants the viewers to understand that stories can be can be rewritten to make new ones. Even characters, make them have their own destiny with out following the original story.

*Humument: Entirely new version of book that is created from the original, such as adding painting, collage and cut-up techniques. Link
*Aka. COMD 1100; college courses that is part of Learning Community: Ways of Seeing. Link
*X-acto: aka. Utility knife; short, sharp blade mounted on a pen-like aluminum body, used for crafting and hobbies, such as model making. Link
*Chromatic Gary: Grays that exhibit a subtle, but discernible hue; created by adding larger amounts the complement and white. (COMD |Chromatic Gray Studies) Class 19 Link

something that is so commonly used in books, stories, etc., that it is no longer effective

In Eng1101, I learned this word from a reading called ” The Boston Photographs”. On line says: ” Learn to use clichés with devil-may-care abandon.” There is a interesting symbol on top of the letter “e”, I curious what is that meaning for, is anyone knows that?

noun
Source: Google Translate
From COMD1100, I learned this word when I draw my project of using the ruler to adjusting the position of objects .
Adjective

having parts that fail to correspond to one another in shape, size, or arrangement; lacking symmetry.

I learned those word from the COMD1100. When I draw the any type of the figure, I have to understand of the balance of the principles. Those is the the one of the balance, called Asymmetrical balance. 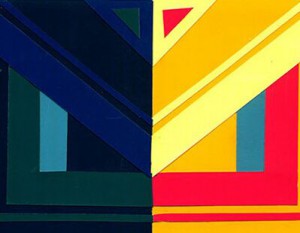 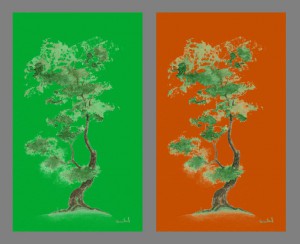 For group 1, I learned how to make the two achromatic gray small square that in same value look different by vary the value of the large square. It took me about 15 minutes to finish.

For group 2, I changed the value of the large square but keet its color. It alters the perceived value of the two small squares that in same color. It took me about 15 minutes to finish.

Group 3 – Shifting hue, but not value

For group 3,  I learned how to make different colors have the same value. I chose one hue as my two small squares’ color and make this one color appear as two by varying the color of my two large squares. It took me about 20 minutes to finish.

For group 4, I learned how to shift both hue and value of  my two large squares to make my two small squares that in same color appear as two. It took me about 15 minutes to finish.

When I learned on this group, I thought this was easy to create studies, because it was gray color. I didn’t have to think a lot of the value or hue.

This group 2 was a little difficult than group 1 because of the value options. I had to try many times to make it perfectly.

Took about 15 minutes, because I had to double check the color.

Group 3 – Shifting hue, but not value 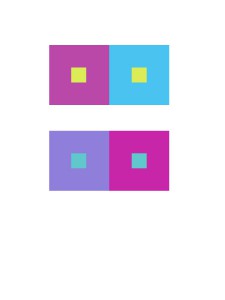 Group 3 was easy to create. I learned how to using two color but had the same value, then saw a difference in the middle square, to create the misconception. 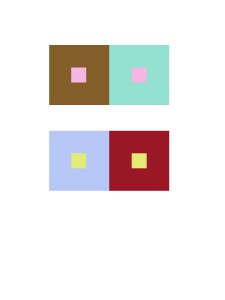 When I knew how to create the group 3, then group 4 will more easily. Just combine group 1-3 knowledge to create.

This group was difficult because I had to make sure the color of the middle squares look the same one.

This took about 20 minutes 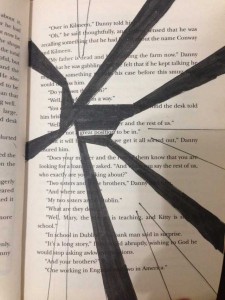 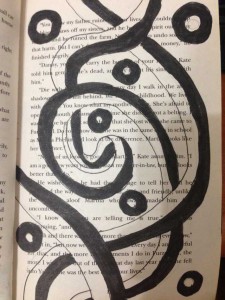 To convey life and death in the image, Xingfu drew circles and line taps, half of which were filled in with black ink and the other half left blank. The idea was came from the text, the words “dead,” and “live”. He’s trying to express that live and death are so close. 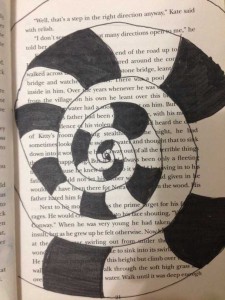 In Twisted space, Xingfu drew a snake like tape goes in circle like a sea shield. He is trying to express how a twisted space look like, a twisted space in his mind is like a space that has no end and it keep continue twisting.