This exhibit is presented by Xingfu, Ye. Xingfu was born and raise up in Zhejiang, China. Then he moved to New York where now he live. Xingfu is a student of New York City College of Technology whose major is graphic design. He get inspired by a British artist Tom Phillips’ recreation “The Humument”. “The Humument” was first publish in 1970, it was a recreation of W H Mallock’s Novel  “A Human Document”, and the name “The Humument” was come from the original novel name. Tom Phillips took out “an” from the word human, and “Doc” from document, then he put two words together become Humument. The purpose of this is to recreate a different theme and story of a book to let reader have a different exprience of reading the original book and recreated version of the book. Alice Taylor’s novel House of Memories is a story of resilience in the face of family tragedy. Xingfu have recreates few pages of House of Memories with different theme, his favorite three pages are “Great Position”, “Death and life”, and “Twisted space” In first page, Xingfu try to convey a great postion, so he used Ruler, Pigma Micron 05, and PITT artist Big brush to draw lines and solid bridges to support the center. The idea was come from the text where he found the words “Great position”. He is trying to explain that how a great position is like, a great position is where the surrounds are supporting one area to make it a great position. For this page, if views did not see the word great position, they might be confuse and not understanding about this page. In the second page, Xingfu try to convey life and death, he also used Ruler, Pigma Micron 05, and PITT artist Big brush to drew circles and line taps, half of which were filled in with black ink and the other half left blank. The idea was came from the text, the words “dead,” and “live”. Xingfu is trying to express that live and death are so close. The lines was drawn twisted, because he wants to show that life is difficult so is death. Viewers might confuse about the circles, Xingfu said he drew circles was trying to represent spirit, but he did not write in the description, because he think the circles could also represent as events that makes how the life is going to be, different person has different views. In the third page, Xingfu drew a snake goes in circle like a sea shield, this is trying to convey Twisted space. Xingfu said this is trying to express how he thinks a twisted space look like, a twisted space in his mind is like a space that everything is twisted and has no end. In this page, viewers might think that this drawing look like a portal, Xingfu also had a thought about that, however he thinks inside of the portal there must be another space, and that space is just like what he have described. Xingfu’s recreations give readers a different point of view of the original novel. From a resilience in the face of family tragedy story to a science fiction story. Each page contains a small message about the new theme of the story. 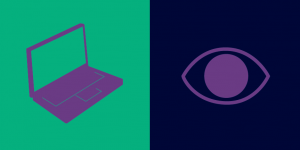 Colors indicate different things, such as emotion, feeling, and personality. From this project, I learn to discribe a person by using colors instead of using literature words. I chose dark blue as a representation for my partner. His first impression to me was he is a calm person who good at observing people. And after comprehend more about him from the conversation, I convinced I was right. Considered he took phycology in high school, enjoy in reading books  more than entertainment with others, and likely isolated himself from people, I determine he is an introvert with sensitive feeling, intelligent but mostly used it for himself only, don’t easily show expression or feelings because of too calm.  According to these observations I chose for him dark blue, a color mixed of blue and black. The logo I chose for him is an eyeball, eyeball represents mystery, he’s  fully surrounding by it, another reason is because he can’t stop  observing people so I believe the eyeball is the best logo to indicate him. We spend about a half hour to finish everything. It’s a interesting project, and I learned new knowledge of colors.