After a very long and hard semester, I can say I have been able to accomplish a lot. Though it was not exactly a “piece of cake”, there is still much knowledge and thorough understanding I can now integrate in my “ways of seeing.” This personal glossary we have all created was an excellent way of being able to give myself a much more thorough and meaningful understanding of context and content in ENG 1101. Not only was I able to understand better, but also give myself a sort of perspective on what exactly it was that we, as students, were given to analyze. Not only was it beneficial in that perspective, but also in the way we expanded our vocabulary. Such words we have learned can easily give us a jumpstart on our future English courses. Having that knowledge and understanding on such advanced vocabulary can help us understand future context and studies, and at the same time be grounds for use within our own vocabulary in our essays, reports, etc etc. Also, I feel as if I have founded a sort of curiosity within myself, that gives me an incentive to continue to research unknown words within future context. I have come to notice that I tend to google certain words or phrases when I come across them in my everyday life. That in itself can come as an amazing and useful habit, and will definitely benefit me in the long run.

After drawing inspiration from Saul Bass’ Exodus, I then created my humument cover based on its color scheme. I also decided to do my own rendition of the “flames” due to fire being a running theme throughout the piece. 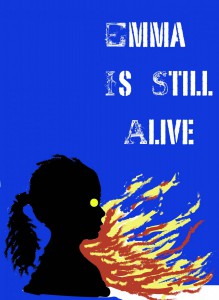 After our trip to Cooper Hewitt, I decided to choose a piece of art by Saul Bass called Exodus. This piece was created in 1961, and was poster designed for Otter Preminger’s film Exodus. I chose this particular piece because i thought it would be an excellent color scheme for my humument, and it also featured fire, which is already a pretty important part of my piece. I then created its color pallet, and used it as a base for my own cover art. 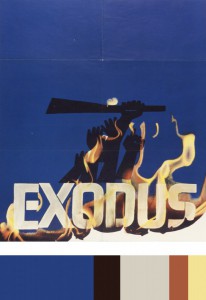 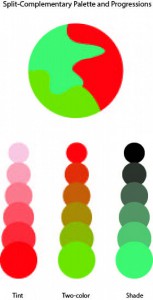 “Emma is Still Alive” is a piece created by aspiring artist Klever Javier Cobena. Drawing inspiration from Tom Phillips “A Humument”, the artist conveys a dark, mystifying, and gruesome atmosphere within his piece, using the contrasting original work of Jane Austen’s “Emma”. The concept behind both of these works is taking any medium of literature (i.e. a book) and turning it it into something completely new using different design aesthetics and artistic techniques. Originally a story of a young girl living in an upper class home in England, Cobena re-works that story with the the intention of driving it as far away from the original concept as possible. Using horror as a medium, Cobena decides to tell a tale of a a gruesome massacre, using only his design aesthetics and few highlighted words already within the pages of the book. Within the composition, a vast majority of the pieces are composed of either black ink, black paint, or black cut paper. Cobena, preferring black as a sort of “negative” color, utilizes materials such as Micron Ink Pens, Pigma Brushes, and Black Gouache Paints to re-work and block out certain words within the pages. With the given emphasis on certain select words that weren’t blocked out, Cobena re-tells the story through the artwork spread throughout the page. Certain examples within “Emma is Still Alive” include pages within like “Here Lies her Sins” and “Vision Of Shadow”, that use overlaps of two pages to create a single composition. Cobena uses nothing more than an exacto knife and a pen to create these overlaps, and express a single idea and theme with an overlap of two pages. Cobena also strongly integrates the concept of certain patterns of staccato nature, and legato nature. Using these concepts, Cobena creates certain moods and certain ideas using patterns differing between these two traits. On one page for example, one can view a sort of blood pattern running down on the words of a page, created using only a colored pencil and an HB sketch pencil. It has a a flowing, smooth pattern, and gives the viewer that feel and imagery of a bloody mess. On another page, there are images of sharp, jagged edges blacked out with a pigma brush, giving the viewer a sense of danger. Other design asthetics included with the piece also include ambigeouity, where Cobena utilizes the words on the page to create a layout that is very eye wandering and complex. There are also stable compositions, where he instead makes a focal point on the composition, drawing the viewers attention to a specific spot. Although most of these pages consists of mostly black color schemes, there are also works of color included within the piece. Cobena skillfully shifts certain traits of pure bright colors like prismatic blues and reds, to make them less saturated, decreasing their value, and keeping the visualities of darkness and negativity to stick to his theme. All while conveying their intense expressions and ideas they were intended to.

Reflecting on this project, I seem to have some sort of understanding of all the concepts we were intended to learn, although i hope to grasp an even bigger understanding of them throughout more of my courses. With these color interaction studies, i was able to learn how colors are much more than what they seem. I was able to understand how intergrating concepts like saturation, value, hue, and tons can affect a color, and create something completely new.

With fellow classmate TK, we both researched on how color can be used to express certain personality traits. Not knowing too much about each other, we composed a list of  how we saw each others personalities. Based on that list and our research, we created our Paired Color Identities Composition. 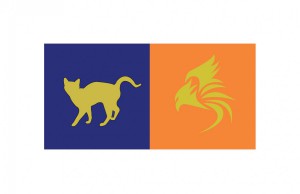 I decided to choose a more lower valued blue, with less saturation for her personality. I felt this color was suitable for her, as i saw her as a more cool, clam, and reserved kind of individual. She is also very shy, (hence why i chose to de-saturate the color). Blue is very commonly used to express these kind of traits in a person.

The first color interaction observed is based off shifting hue, without touching the value, while the second shifts BOTH hue and value. 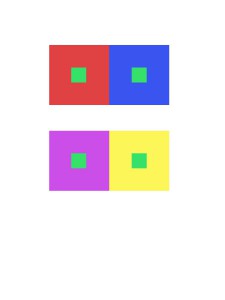 Shift in Both Hue and Value 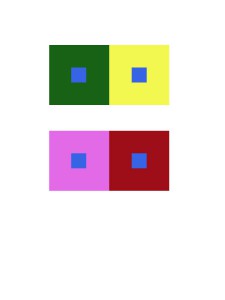 These color interactions are based off of adjusting the hue, but without touching the value. 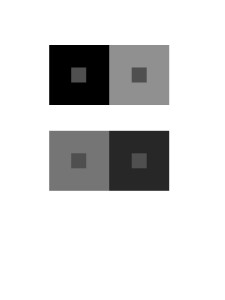 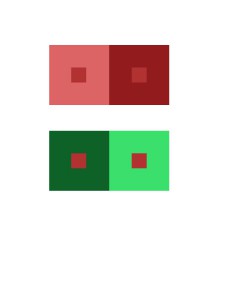 “the belief in or practice of disinterested and selfless concern for the well-being of others.”

Upon reading the article “60 Years Later, Echoes of Emmett Till’s Killing”, the author quoted a previous written article about the Charleston Church Massacre, stating his opinion on Dylan Roof’s motives, and his sense of “Altruism” in his actions. It’s an essential word in his article, due to the sarcastic nature of which he quotes it . It voices the fact that he is against the actions committed, and on the side of victims of said massacre.