I’ve come across this word in the reading excerpt “A Literary Visitor Strolls in From the Airport”. This word can be found in the sentence “He used to be a prodigious drinker and drug-taker, famous for late-night altercations, not always coherent public appearances and marathon hours at trendy spots like the Groucho Club”. In this case, prodigious means very big. When I read ” used to be a prodigious drinker and drug-taker”, I inferred that prodigious meant big but I was still unsure if it actually meant big.

I’ve come across this word in the reading excerpt “A Literary Visitor Strolls in From the Airport”. This word can be found in the sentence “Smoking is Mr.Self’s only remaining vice”. In this case, vice means a bad habit or behavior since smoking does harm to the body. At first I was confused with the phrasing of “only remaining vice”. As I continued reading the next sentence said “He used to be a prodigious drinker and drug-taker…”. I learned at that moment that Mr.Self in his present state only smokes and gave up his other vices.

I went around the City Tech neighborhood in look to find any overlapping New Yorks, and I did. In order to find the overlapping New York I found, you first need to exit City Tech from the Namm building. Once you are outside, turn right on Jay Street and start walking. As you walk for about 5 minutes, you will pass a parking lot, a Halal Cart, a resting area where a lot of people will be sitting and socializing with their family or friends. Then the Jay Street Metro Tech subway. As soon as you pass the subway about halfway through the block, look across the street and you will see the overlapping New York. You will see a tall, beautiful building called the Brooklyn Fire Headquarters and right next to it you will see a small store name Metro Café.

The Overlapping New York here is a big beautiful building (Brooklyn Fire Headquarters) and a small store name Metro Star Café. The Big building is newly renovated, however, you can tell it was there for a long time because of the way it is designed, this building is very unique. It is old fashion. Whereas the Café looks newly build as. It has a modern time look to it. The fire house has a pointy rooftop, you can see the patterns in the design on the roof whereas the Café has a flat roof and you cannot even see it from the street view. The Fire Headquarter is a huge building about 6 stories high, and it even has a balcony. The café is just two stories high. The fire house has many windows about 20, where the café only has about 3. The fire house is made of brick where the café is not. On the café, you can clearly see the name on it right at the top, but you cannot see the name of the Fire Headquarter on the building anywhere. My guess is they have not put it up as of yet. The fire Headquarter has an arch door entrance and a regular door entrance, which really makes the design of the building beautiful. As for the café, it has a very basic door entrance.

The Fire Headquarters represents New York’s safety. New York is very quick when it comes to responding to danger. Without this fire headquarter many people could have lost their lives. Thus depriving them of exploring New York and the world. This Fire Headquarter has been on Jay Street for a long time, and many people have made it a part of their New York. They may pass it every day while walking down Jay Street either taking a stroll, going to work or school, this Headquarter is a part of their daily life. And so is the café, people go in their every day to get coffee to go to work or where ever. The Café represents New Yorkers and food. New Yorkers love food. New Yorkers live on Coffee, we have to get up early and coffee is the way to get that morning boost. If this café is to be removed and replace many New Yorkers will be affected, they are used to seeing that café there and going in their every day. If it is to be removed, they will have to find an alternative.

The photo I took shows the frame of both buildings. On the right is the small café, and on the left is the huge Fire Headquarter. It captures the juxtaposition nicely. You can clearly see how different these two buildings really are. The main focus here is the Fire Headquarter because of the size, whereas the café is so small, you barely look at it. These two buildings are completely different, the Fire Headquarter is big, tall, and very clean like the other buildings around there, whereas the café is a small short building smack in the middle of the tall big buildings. Both buildings, however, are highly maintained.

I decided to choose these two subjects to juxtapose because they are so completely different to me. Walking down Jay Street my eye catches this big beautiful building which is the Brooklyn Fire Headquarters, and right next to it is a small café that you can miss you don’t look carefully. What strikes me the most is why they would build a small café right in the middle of these big tall buildings? It just does not fit right. What I want to know is, how long has the fire house and the café been there? What was there before the café was built there? Why did they choose to build a café in that location? As Whitehead said from City Limits:

“Go back to your old haunts in your old neighborhoods and what do you find: they remain and have disappeared. The greasy spoon, the deli, the dry cleaner you scouted out when you first arrived and tried to make those new streets yours: they are gone.”

In other words when you go back to your old neighborhood you might not see those same things you use to see from the time you were once there. This applies to this location because I did some research and discovered there use to be another building where the café now is, therefore, when people return to Jay street one day they will want to know what happened to the place that the café replace. That building is now gone and a new one took its place. Whitehead also said, “Maybe we become New Yorkers the day we realize that New York will go on without us.” Meaning New York is always changing, thus leaving different sensory in our neighborhoods, even though we do not want the change sometimes New York will keep evolving in the future with or without us.

Hours Spent – about an hour, I did not really have enough time to work on this mash up due to the passing of my Grandfather.

This project was interesting because we had to basically draw sound. I could have done a lot better with this project but sadly I did not have the time, since the passing of my Grandfather.

Here is my Animation.

In this Staccato/Legato project, I learned drawing images that comes to our mind while listening music. I’m really enjoy doing this project. For me, the most fun part is move all the mashup image around and make an animation. What I could done better is if I could found better sound to fit the animation. I would try to make the animation more detail and longer. 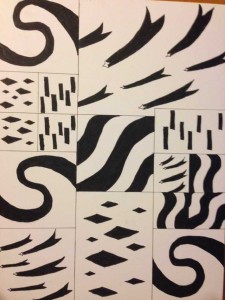 Finish in 2 and half hour overall.