My name is Leonardo Javier Barrales, and no I am not name after the Italian artist. I’m 18 years old, I’m a freshman at City Tech, of Mexican decent. I recently graduated from MLK High School for Law, Advocacy, and Community. The reason I came to this school was because it was the only 4 year college I got accepted to and that I would give this school a chance for now. Another reason why, because I want a fresh start in my life in college, to meet new people, learn more about my major in college. When I’m around people I’m quite the introvert due to me being afraid of how people would react if I say something, plus the feeling that I might not get along with people so long as they get along with me, but if I do get along with people better, the sooner it gets better for me in the future. Also people see me with a very serious face which I get that a lot. Since 8th grade I’ve had realized that I’ve had interest in Graphic Design, after I had a computer art class and I was doing some really interesting types of art on the computer and I would get 90s in my class for doing it. Later on in high school, I would be on my iphone using a drawing app I had drawing random things including symbols, like for example drawing this symbol from the first part of the final Harry Potter movie or drawing this somewhat interesting symbol from my favorite band. During my junior year in high school, I began to take art classes it started at first doing different kinds of art and I some types artistic styles I did enjoy doing. Some for example like 3D art and recreating original paintings in any kind of way. But drawing wasn’t just what I like doing, it was also origami, I mostly like a doing somewhat basic stuff like cranes, hummingbirds but in a basic way, mostly the easy level of making origami. Then again I realized my artistic style in drawing involves mostly geometry, of both interest and making. That’s why I have this picture of this flower-like pattern as my avatar on my profile I enjoy viewing art that is geometric and it’s my favorite and somewhat most difficult geometric drawing for me to do. The reason how it’s my favorite was because I was listening to this album called Sempiternal by favorite band Bring Me the Horizon and I got very interested in the album artwork a lot. This symbol is known as the flower of life and it’s common meaning involves on spirituality and enlightenment, to which I also take a little bit of interest in, but it’s I want in life to gain peace with others and myself. My taste in other types interests are very peculiar or either very perplexed due my liking things that are eccentric. For example like like TV shows my favorite TV shows are American Horror Story, Game of Thrones, and Gravity Falls. Also in music my liking in genres are pop, punk, rock, alternative, and hip-hop. My favorite artists are Paramore, Demi Lovato, The Pretty Reckless, Bring Me the Horizon, Sleeping with Sirens, Lana Del Rey and etc. 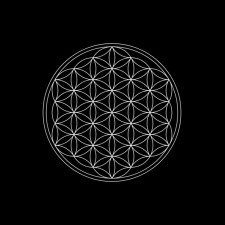 Each drawing took about 15 to 30 minutes. I am wondering if I can use whiteout to erase some parts in the drawing. (Sorry if my shadow is in the way)