I feel that it is important to open up further discussion and analysis of phlebotomy skills and training during the clinical period in school. “Phlebotomy is a process of puncturing the vein (also known as venipuncture) in order to get a blood sample for performing a medical test”. If we go way back to the blood draw history then, “bloodletting is an ancient medical practice, but its origins weren’t sound. Bloodletting is what it sounds like, it’s a withdrawal of blood. In ancient times, this was usually done with a knife”. Little did I know about healthcare in the U.S.A., which is one of the fast growing industries with secure jobs.

Such discussion would bring the following potential benefits, like how to deal with some level of your nervousness and anxiety while drawing blood. People tend to be scared of blood and I was one of them. Stepping into a healthcare field was a nerve racking. I remember my first time drawing blood from my classmate on our phlebotomy clinical rotation. Luckily, we had the best professor and instructor to learn from.  The idea of sticking someone with a sharp needle without causing pain gave me anxiety and my hands were little shaky. Yes, the needle went right into the vein and blood was flowing through to the tube. However, phlebotomy isn’t for everyone, it’s an excellent opportunity for those who can handle being around blood, needles and work with different people on a daily basis.

I’m so grateful that we are living in the XXI century with modern technology, specially in medicine. While phlebotomy is an entry-level job, it’s still a medical career. People who come to see phlebotomists can be nervous or scared, or uncomfortable. Hence, if someone commit to be a phlebotomist, they should get rid of those fears and bad experiences that they had.  Therefore, because of improper or lack of training sometimes people get hurt and injured and these are complications after the blood collection that I’m going to discuss:

This awareness is important because people need to know how hands-on training and practice is important in taking steps into the phlebotomy. The more person practices, the more he/she gets comfortable drawing blood. In order to get better, we should take an advantage of having internet access and use it right way. Drawing blood can be rewarding and challenging all at the same time.

“How To Draw Blood Like A Pro: Step-By-Step Guide.” Nurse.org, nurse.org/articles/how-nurses-professionally-draw-blood/. 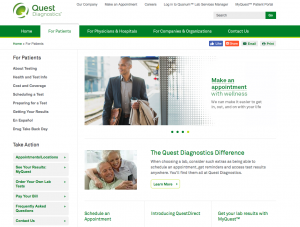 Analysis of the Genre (Trip Advisor)

Who wrote it/the speaker: IT and Marketing Department employees of Quest Diagnostics. Healthcare professionals who knows the company protocol and people working on companies development.

The audience: medical professionals such as: physicians, nurses, medical assistants, phlebotomists, who is interested in going to medical field, patients who go to their annual check up to do their blood test.

The kind of community that is invested in or impacted by this writing: people who work for the Quest Diagnostics and people who go to get their blood drawn as a patient. On the other hand, as an employee they want to give their patients quality and safe services and on the webpage they have to put reliable information. Physicians who orders the tests and all the medical staff who keep tracks the results.

The purpose of this writing: this webpage is guiding, advicing, informing, educating people about different tests and their option in Quest Diagnostics Center.

Some key vocabulary or language terms you might find (if any) that are Common in this form of writing: names of different tests, phlebotomy, blood draw, diagnostic testing center, healthcare.

The sorts of ways that people try to write effectively in this genre: The Quest Diagnostic Center wants to make their webpage very efficient, convenient, clear, reliable, organized and affordable. The webpage needs to lead to other informations that people look for.

UNIT 3 WORKSHEET 1 Note: the following are prompts to help you organize your work. Please make your answers clear and easy to read! Take all the space you need to answer the questions.

My general area of study is: Drawing Blood

Phlebotomist Job Description. All You Need to Know

I understand the term “genre” as a form of art or entertainment where communicative interaction involves and it can be written, spoken, audio or visual. 10 Genre’s that I encounter every day: Facebook, Instagram, Gmail, BabyCenter (app), Youtube, Google, music, media news, photography, children’s book.

As a new mom I always try to be on top of my babies development, meaning that I use application called BabyCenter which has expert information,insights and tips for pregnancy and parenting. So, this app gives you daily parenting guidance through your baby’s first year.

The audience of this app is moms in general, who needs support and advice from others. App also, connects with moms of babies born the same month as yours, the same moms you met when you were pregnant. You can chat with moms using the app and post pictures, have your calendar.

Photos, I love taking pictures of my little baby. Because, I think we are lucky to live in a modern, progressive world where we can capture amazing things and have them for life. The audience will be my family who will look at all those memorable pictures.

***Before doing any procedure you must confirm patients full name and date of birth.

Materials (ingredients) for the tray

***Process by spinning the blood using the centrifuge machine and send them to the Lab with the right patients requisition form.

The choice that led me to my freedom.

The Choice that Led Me to My Freedom.

Have I found my freedom? I’ve asked myself for the first time. First thing comes to my mind is when I achieved financial freedom at age of 19. Financial freedom meant to me that the money you’ve earned, you get to make decision when and how to spend them, and not to be controlled by your parents. Back then, being first year college student I had an opportunity to work part time at a luxury hotel in my hometown. I enjoyed the work I did as a waitress  and saved some money to purchase my first car. My financially independent life started right after I’ve graduated college in 2010.

Lao Tzu said: “A journey of a thousand miles begins with a single step”. As a human being we all have a dream and goals. In this life we face to success or failure. There is always some kind of risk to achieve a big goal. As a little girl I’ve always dreamed about studying and traveling abroad and here I am writing about journey to my freedom. In other words, I knew to truly understand English, become fluent, and learn the culture of the English speaking world, you need to learn English abroad. I’m from a country where people afraid to leave their routine lifestyle, friends and family. I left Kazakhstan in 2011 at age of 23 to follow my dream and pursue my goals. First year was very tough to adjust myself  mentally and physically to a new country with completely different mentality. Each day was full of surprises until I got used to the City of New York which is always crowded, constantly evolving big city with charming views, with diverse people from all over the world. It’s wide open to explore the city even without spending a penny, so many free places such as museums, shopping centers, libraries, free events, walking tours and so on.

In fact, the English that I’ve learned in school was British English which is slightly different then American English so, I knew basic English grammatically but not spoken. Listening people around me and to understand what they were saying was challenging. I was so desired to speak the language so fluently and without translating from my native language. I was so afraid to have conversation with local people because of my poor English and heavy accent, people tend to judge others so easily. Malcolm X said: “I suppose it was inevitable that as my word-base broadened, I could for the first time pick up a book and read and now begin to understand what the book was saying. Anyone who has read a great deal can imagine the new world that opened”. I chose this quote because it relates to my story when I came to U.S. The school I went for ESL program helped me to learn the language well. I had to put myself in an all English speaking environment where I could learn passively and the best way to learn was through speaking. Also, I keep a notebook of new words I learned and used them in sentences and tried to say them at least 3 times when I spoke.

Therefore, after a year of living in New York I wanted to go back to Kazakhstan. The main reason was that I emotionally isolated myself from others, felt lonely and depressed.  Later, I said to myself that going home is not the best option and I had to work on my personal identity to build a relationships with other people. However, I’m an open mind and easygoing person so, I didn’t have hard time to make friends and to build a friendship with them. I just needed some time to get used to. There was no support from anybody, because all my family is in my country. I knew developing and exploring myself in any relationship was very important. Because, life is never been easy for anyone, it is particularly harder during the time of adjustment. The period where I was no longer a child, but not an adult. I am now at the point where I found my other half, meaning my husband and have my own child.

In conclusion, I would like to add that my life may not have been perfect however, I did find myself in this country and realized that freedom is your choice that you make in order to get what you really want in this life. Definition of word “freedom” might be the state of being free, freedom is a right or wrong choice that we make just to own that happiness. I know that  I’ll continue to achieve my goals and build my life experience, facing with success or the failure. As we know life can’t be perfect, I just have to be focus on my career and family to accomplish my goals successfully.