Thinking back through all the years

How fast they have come by

I close my eyes to sing in my head

You were something that had me stuck to my bed

Had all my uniforms covered in stains

But the memories is all the remains

With the toughest, there you stood

Motivated to go out and lay the wood

You devoted me to hard work and dedication

That then caused me to take medication

But that’s just to see those cut back lanes

Never have I thought I’d be playing

But there I was waving

Boom there goes someone lit

Fear was an extreme factor

This intense game isn’t for everyone

But there I was on that green grass

Sharing a laugh with everyone as it was my senior year

There I was over my fear

Being captain something incomparable

Being looked up to for benching 265

There goes the little jv kids looking into my eyes

Many people may interpret freedom differently. Some may view it on a positive note, some in a negative; Or maybe for some, it maybe a situation where the positive of freedom turns on a person to become a negative outcome. I believe freedom comes along with when one matures and knows what they want in life. If a person doesn’t have a drive and determination to really do anything with themselves, then they may end up with a limited freedom mindset. With Malcolm X, he had the freedom to learn but due to being in jail he wasn’t literally free. I believe confinement, ultimately, is more mental/spiritual rather than physical.

I believe confinement can be determined more mental rather than physical due to the fact Malcolm X had a mentality where he wanted to learn. Had he not had this mentality he would’ve possibly never went out his way in order to get a hold of self education. He would always be amused with what he learned. In prison, he would act like he would be asleep just to be able to finish a book. This shows his determination in reading and learning new ideas even while in jail.  Malcolm X was in a cell writing words and punctuation he didn’t know how to use then but was using them effectively once out of jail.

In my situation, I can’t really say I taught myself to do anything. I mean maybe the little things but anything big? Probably never. I always had supportive spirits around me in order to learn what I was interested in. How?  Well I always enjoyed cars as a child, so come time to apply for High Schools, I was denied into my first rounds that I had put on my list. Being that I was going to end up in the second round, I was astonished there was a High School actually  called automotive. Fast forward to my senior year, I ended up playing football, and learned how to work on cars. I was offered internships in repair shops to satisfy my automotive needs. Football, had many factors. Many supporters around, wonderful coaching staff to teach me new thing I wasn’t used to. In some way this relates to Malcolm X in the terms where he went out and searched and did research on things he was astonished by. In my situation, I was always amused by cars, so I went out of my way to get put into an environment to be around what I truly loved and enjoyed. Did it have it’s negative factors? Of course. Automotive my freshmen year, was probably the top worst high schools if not in Brooklyn then in the whole New York City. Being surrounded by mostly males in my 4 years, allowed me to view things in a different perspective being that I was mostly always around females in my family. This opportunity I had to be free allowed me to maintain a knowledge I never thought I’d leave this High School with. I was able to work on my own car, perform my own workouts, boost my confidence, and break out my shell since I was so shy heading into High School.  The automotive program had allowed me to graduate with an endorsed diploma and a step closer into the MTA career.

Something difficult I found, that everyone found so simple was probably the fact  I couldn’t lift a 45-pound bench press bar. Yes this may seem like nothing, but this came a long way throughout High School. There was one day where it was raining outside and the team had to go to the weightroom. We were being tested on reps meaning how many you could do in a row. I knew I couldn’t lift it but I still tried. Of course, resulted in zero. Fast forward to senior year, after a hard working dedicated summer, there I was benching 265 pounds. All it took was slight interest and know what would be at the end of the tunnel if I put my mind to it. No, I don’t give the credit to myself. I give the credit to ones who devoted their times for me to improve. I believe if you have freedom and people that will support you along the way things will end up turning out positive. Working out is part of my daily life now, challenging myself and dedication were probably the keys to getting to this point. I believe the word “freedom” really defines your mentality. A weak minded person would believe “worst school in New York City?”  What Will I be learning there?” “Is it even worth it to try bench pressing this 45 pound weight?” Malcolm X mentality was trying to bench that 45 would lead him to somewhere and lead him more knowledgeable on something he enjoyed doing.

Thus, I believe if you’re a strong minded person, no matter the situation, you can accomplish whatever you enjoy doing or find astonishing. You may or may not need support during the situation, but it all depends on the effort giving towards the opportunity. If you have a strong gut feeling something will come out positive and your mentality sticks to these things you enjoy doing, you have basically found your freedom. So to wrap it up, a strong mentality, support, effort and determination can lead towards freedom. Yes this may sound cliche, but it may lead to the freedom. Sometimes you don’t know why you do some things til the end and that’s where you go back to realize, that’s why I was told to do that one thing.

In these interesting experts “Backpacks vs. Briefcases” by Laura Carroll and “Teaching Rhetorical Analysis” by Nelson Gaff, the author tends to go over some interesting topics.  In the excerpt “Backpacks Vs. Briefcases”, the author is describing how the Rhetorical analysis has been around for so long and how society is so used to it, we often don’t realize how big of a deal it maybe.  I found myself understanding the “Backpacks Vs. Briefcases” more than “teaching Rhetorical analysis due to the fact Carroll actually puts an image in your head right off the bat you could automatically relate to. For example, when she mentions first impressions, that’s probably the best thing I could relate to due to the fact I am guilty of doing it. They go on to talk about how it mostly impacts mostly on students.  “Teaching Rhetorical Analysis” wasn’t bad, I believe it gave me a broad sense on what the topic really was and what age groups are mostly affected. Some words I came across that weren’t so glamorous was aberration, which is a state or condition markedly different from the norm. 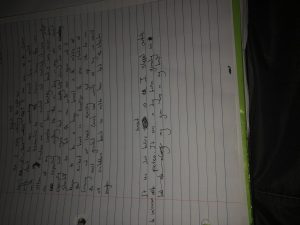