MY FINAL PORTFOLIO AND JOURNEY

IS IT WORTH FIGHTING FOR FREEDOM?

Is it worth Fighting for Freedom?

What is freedom? Are any of us really considered free in this horrible world? Freedom is different for everyone and can be found in different ways. I don’t really think anyone is free as long as they are living. The more I think of it, the harder it is for me to come up with things / places that help me feel free and escape all my problems. Some people can find positivity in every instance, for example, Malcom X was imprisoned and somehow, managed to feel free with the help of reading. The irony is that out of all places, prison helped him become the man that he was. He achieved what he thought was impossible and it helped him survived.

I think there is a difference with being free and being happy. You can be free from a situation or prison and not be happy. In order for me to be free, I have to be happy and I haven’t found either one yet. According to the Cambridge dictionary freedom is “the condition or right of being allowed to do, say, think etc. whatever you want to, without being controlled or limited”.

In the bill of rights, the word freedom is used a lot, “freedom of speech, freedom of religion, freedom of assembly…”. In America, can we really say we have all those options? I get it, in the Caribbean, Europe and other countries, people are not allowed to do half of the things that we can do in the United States, but are we as Americans really “free”. With the idea of freedom of speech, we are supposed to be able to say what we want anywhere and anytime, but we cannot because we must censor ourselves in certain places because it’s not viewed as “right”. With freedom of religion, we are allowed to practice and believe in whatever religion that we want whether it be Christianity, Islam or Jehovah’s Witness just to name a few, but, just because you can chose, doesn’t mean everyone will agree with your choice. For example your neighbors, family and others may treat you differently and harass you, if you do not share the same views or beliefs. Where is the freedom in that? The freedom of assembly gives individuals the right to “speak up” as a group or on their own. When a group of people get together to protest, 75% of the times, if others don’t agree with you, they will push you away and shut down the protest by any means possible. How can I be free when I must always think about how everything I do and say will affect others. We should rethink about what freedom really is.

Freedom doesn’t only come with happiness, it comes with equality and safety. How can anyone be free and safe when you can’t walk outside your house, go to school or church without fearing someone hurting or even killing you. People are being treated equally and being killed just because of their race, gender or the people they choose to love. According to Christopher Jencks from the American Prospect, “America is more violent today than at many times in the past”. The world is just getting worst everyday instead of better. In the Malcom X biography, he found freedom in reading because it allowed him to escape the fact that he was incarcerated. In the moments in which he was dreaming about freedom, anything could have happened to him since he wasn’t in a safe place. Why dream about something that is not going to come true,? It will make you feel better for a few seconds until reality hits and brings you back to being miserable.

The sad part of it all is that I can’t put all the blame on the people in charge because it is also our fault. With the laws and all the restraints that we have, it helps maintain order (most of the times). As human beings, we don’t always know how to act when we get to make certain decisions on our own. But is it fair for all of us to suffer just because others don’t know how to properly act and get along with one other?

I have not found freedom and don’t think I am going to find it, which I am fine with. We can’t always get what we want, but that doesn’t mean we shouldn’t try. We are restrained everywhere, for example, at home we must act or be a certain way because it’s what our parents want. I can’t walk outside with no clothes on because it’s against the law, well forget the law what about what I want. Why do I have to always think of others before doing what makes me happy? I don’t want restricted freedom, I want real freedom! I want to be able to have a tequila shot at any age because it’s what I want. I don’t want to imagine freedom in my head, I want it to happen.

Others may not agree with me, but that is my opinion and my view of freedom. I should be grateful for the options I have in America but, I don’t agree with all the rules and rights, so because of that, I will never feel free and really be happy.

In the articles  “Teaching Rhetorical Analysis to Promote Transfer of Learning” by Nelson Graff and “Backpack vs. Brief case” by Laura Carroll, they described different ways we can view rhetoric writing and how we can demonstrate it. They talked about how English is spoken different based on where you are from and societies standards ways. Everyone have different style of writing and doing things. The articles also show how rhetoric is based on many other things and it up to us to see things in other ways to be more open to learning new things.

I don’t think I fear much other than death. I think we all have that fear whether we want to admit it or not. The idea of death must scare us all. I realize that  when we die we wont know what occurred. There is a chance we wont even know how  it occurred and what will become of us. If I died at this moment that will cause it, will I feel it or will I leave in a calm manner. Some people are scared of little stuff like clowns and animals but, we can find a method to exclude them from our lives unlike death which is unavoidable. 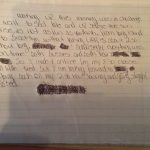