New York City is known as “The Concrete Jungle” that is filled with many different sights, smells, sounds, and attractions. When people explore this jungle they get lost in all the diversity that surrounds them. Not lost in a trying to figure out where to go kind of way but more in dream-like state. Each person has a unique experience when being in the city. New York City hold a reputation of being the place of opportunity and miracles. While the outsiders of city are filled with the idea that New York City is a grand utopia, the New Yorkers that have known the reality of this city would tell you otherwise. New York City is not all city considering Brooklyn, Queens, Staten Island and The Bronx aren’t filled with the skyscrapers and busy streets. Some New Yorkers choose to live the luxurious lifestyle the city part has to offer. The others choose to live less frivolously in the lesser known areas of New York where it is more residential.

When thinking of Manhattan most people would think extravagant, stylish, and a place for opportunity. Manhattan is the borough that is filled with the interpretation of a utopia. With a cluster of tall buildings, bold bright lights filled with ads, many known name brand stores and famous restaurants altogether it’s no wonder Manhattan gets most the attention. To most people this is a place where you would find style no only in the streets but in the people as well. The people have a more chic look that would make you think that everyone is rich and likes to spend their money. Mostly when people hear New York City they think of the borough Manhattan since it has more of the iconic landmarks that New York City is known for such as the Empire State Building, Central Park, and The Statue of Liberty just to name a few. Manhattan is the borough that is more exposed from tourism while not much attention is paid to the rest of the boroughs that make up the city. The rest of the boroughs are not really looked at to be as special even though it is the five boroughs that make up the city as a whole.

However the Bronx would be the polar opposite of Manhattan. When thinking of the Bronx most people would think poor, ghetto, and dangerous. The Bronx is filled with many lesser known small business, smaller apartments and not as much opportunity that Manhattan has to offer. The Bronx is the recognized  birthplace of  hip hop and rap music which made the image of hood that The Bronx is mostly known for. In The Bronx you could most likely get away with crimes such as speeding, stealing and hopping the turnstile at the train station. While Manhattan is seen as a place of welcome , The Bronx is seen as you can’t mess with anyone there without getting mugged or shot. Also The Bronx is known as an impoverished, neglected, and otherwise disadvantaged residential area of a city, usually troubled by a disproportionately large amount of crime.

In the borough of Brooklyn there lies a location that brings a feeling of juxtaposition of two boroughs that would be considered polar opposites from one another. Right where the Fulton Mall and Lawrence Street is located we have two stores known as Dr.Jay’s and Banana Republic right next to each other. Banana Republic is a store that is mainly found the borough of Manhattan. While the store Dr.Jay’s would be mainly found in the borough of the Bronx. These stores are not only contrasting in terms of the boroughs they come from but also in fashion. Banana Republic contains clothing items that portrays a sophisticated, city look. While Dr.Jay’s contains clothing that portrays a ghetto,hood look. For someone who has experienced both boroughs, it feels bizarre placing these stores next to each other given the boroughs they are mainly found in. This part of Brooklyn puts the slum area with the city area making it feel like two other worldly lands are colliding against one another.

This location shows the diversity of what New York is known for. The higher class being next to the lower class is not only shown in these two stores but is shown in the people as well. The location shows people in business suits going about their day with people dressed in hoodies and sneakers. In this location it would feel as though people with their own vision of New York intertwine and make a new vision that could expand both of their views on New York as a whole. Each individual who have visited New York City has their own experience of what New York is to them. Some people may have a fantastic experience while another person may have a terrible one or neutral. New York City is the place to expands one vision on a diverse level.

There are always changes going on around us whether it be the people around us or the neighborhood we grew up in and that we know of. Change is definitely happening constantly in New York. Every corner you turn you see construction happening, they’re either building new houses, building complexes, fixing up roads, or even adding new businesses but there is always something being changed here in new york. I live I New York and I see a lot of changes going on by my neighborhood like they’re building a new mall by my house and fixing up the roads on the belt parkway/southern state. There are a lot of things that use to be here when I was younger and that are not here anymore. Another change people would notice are overlapping neighborhoods, like there could be a nice neighborhood then when you turn the corner the neighborhood could change in an instant and have run down houses and dirty streets, and even you can see a strip of stores and there could be a lot of little self owned businesses and then you see a nice big store that looks out of places that you wouldn’t expect would be there.

The place I chose for this project is a pretty good example of a store that looks out of place and shouldn’t or not expected to be in that spot. I chose a 99-cent store next to a jewelry store on the corner of Lawrence Street and Helen Keller Place. First you exit out the Namm building from the 300 Jay Street side and turn right. You keep going straight for 2 blocks until you reach Willoughby Street, once you get to Willoughby Street you turn left and cross the street and keep going straight until you reach a jewelry store called Giovanni’s Fine Jewelry and next to it is a 99 cent store called 99 cent City.

The location I chose is 116 Jay street. To get here, you exit left from the Namm Building and continue straight all the way, as if you were headed to the Vorhees building, until you hit the Manhattan Bridge. You will  then come to Prospect street, make a right then a left back onto Jay street. There you will see an underpass right under the Brooklyn- Queens expressway. There are two murals across from one another that both read “YES!”. This manifests the idea of overlapping New Yorks and juxtapositions because the murals show great contrast from one another. The mural on the left side has a black background with white text. The text is made from a single line similar to script writing. The mural on the right has waves of water as a background and an octopus’ tentacles form the word “YES!”.  The mural on the right also contains lots of colors, patterns and textures in relation to the left mural which is simple, black and white. Juxtaposition can also be seen when comparing architecture versus street art. At the location, the main sensory experiences I had were visual and auditory. Visually i got to see the murals and the location all around me. there were many cars parked on both sides and very little pass there. If you do see people it’s usually construction workers or photographers. There is more artwork as you walk along that area. Lot’s of beautiful artwork and inspiration all around. Galleries and all, if you haven’t gotten this way  towards jay street check it out. 🙂 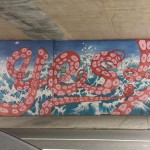 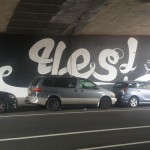