Ultrahaptics was the most compelling to me out of all the exhibits at the museum. I found the Ultrahaptics interesting because it caught my eye with it’s monitor and how it showed bubbles and then the ultrasonic audio waves where you can feel what is showing on the monitor.
*Pictures:
[ https://goo.gl/images/hQ3YDJ ]
[ https://goo.gl/images/AYnARP ]

The portal soundscape was a piece that I feel like not a lot of people went to because it just looked like a video that you watch and listen to but once you really go under the the tube you could hear the sounds like your actually a part of the setting. Also looking at the video you can actually feel like your listening and hearing  like your apart of the hospital that your in.

The feather fountain- was one of the pieces of artwork that I found most interesting, because the way that it looked when we first walked in was amazing and it kind of look like actual birds flying around. When I walked up to it, I seen that it was feathers and they were flying in and around a fan. The air coming from the fan was very calm but powerful enough to keep the feathers floating. 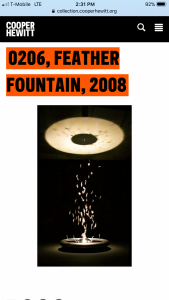 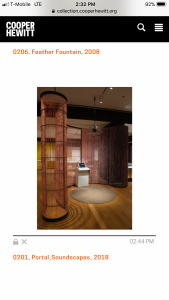 What I liked about the portal soundscape was that it really felt authentic. It was as if I was standing there in the real area . I feel like most classmates may have missed this exhibit because it seemed inconspicuous in comparison to most of the other exhibits.

I liked the feather fountain. exhibit because it was very noticeable. It looked as if the air was juggling the feathers. Anyone was able to grasp the feather out of the air as it was floating.

The speaker was also an interesting one because it had to do with sound. The screen will show geometric shapes and lyrics of the song being played base on its songs characteristic, whether there’d be a hard or soft sound the lyrics and shapes would go along with it. This was interesting because it would connect with the current project that will be worked on in class. 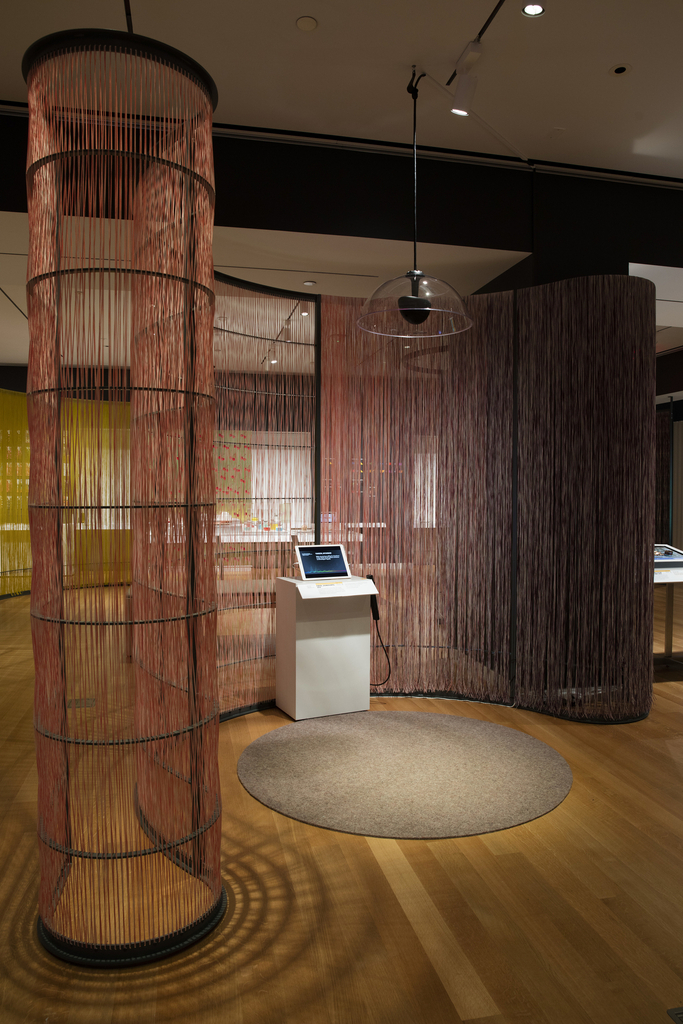 I really loved this work, it was called “Portal Soundscapes”. It caught my eye when I was walking towards it because I didn’t really see that it was a speaker, it just looked like a ceiling lamp or something. I really enjoyed this particular piece because I don’t know how but because the speaker was emitting sounds above me I felt like I was really hearing these sounds in person. What I mean by that is each sound was a different place and different sounds so I felt like I was right there witnessing all these sounds, I think if I would’ve closed my eyes I could imagine being in the scenarios they put down and watching all this noise and sounds happening.  This piece was made by Shared_Studios, an organization that creates two-way audio/video connections between dozens of cities around the globe. Made in 2018. 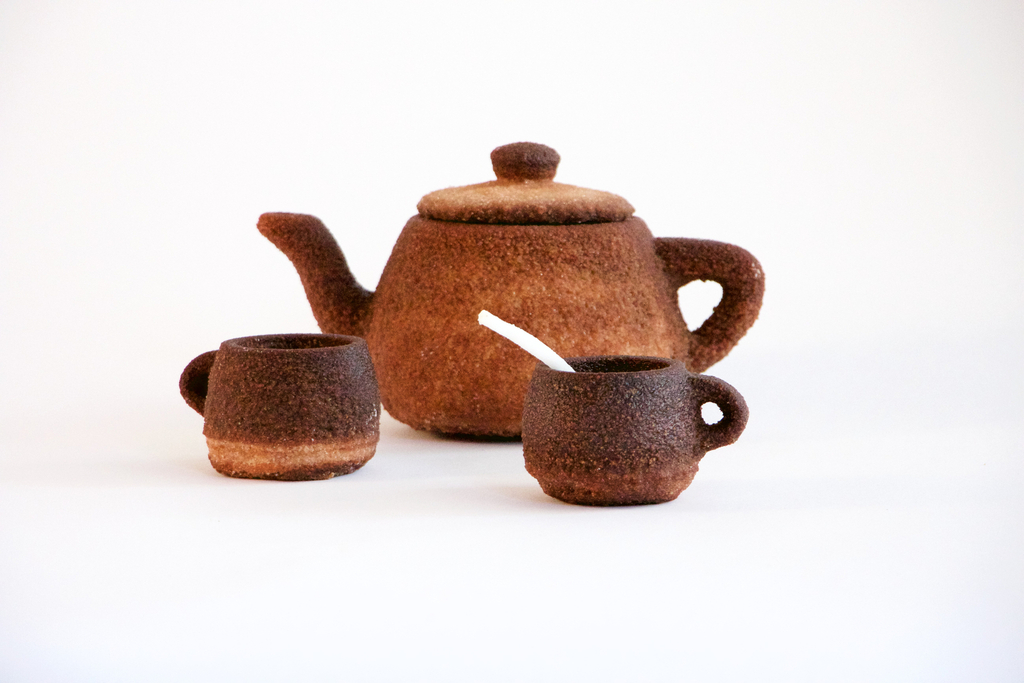 I think a lot of people missed this one, it was one of the works that had to do with smell. There were five glass domes that had those little cups that had a particular scent to them. These glass domes had a tiny indented opening that would allow you to sniff, I think a lot of people didn’t really like the smelling pieces, even though there were a lot of them. This piece was made by Ronald Rael and Virginia San Fratello in Oakland, California. Made from 2015–17. Everything was 3D-printed.

The New exhibit at the Cooper Hewitt-The senses, features many works incorporating our five senses into design elements of everyday objects, such as clocks for the visually impaired, and food bowls for those with Alzheimer’s.

While trying to fully admire each work and making sure to keep a slow pace, i came upon one work entitled “Taste of Music (1002)“designed by Bruno Mesz, made in 2011. The work featured a set of black speakers, each tucked into a corner of the window sill it rested on, with a description before it, reading “Four buttons play short musical compositions inspired by the sense of taste”. After i pressed the first small white button labeled sour, what came was a series of notes that i thought maybe could represent sour to the artist. This work compelled me because of how subjective it was. In other pieces i saw, they mostly relied on touch, sight, or audio, but what this piece does is different, it tries to take something we taste and translate that into audio, which in my mind, doesn’t work. When you’re first introduced to it, you are immediately given a name to the sound, in a way its almost saying “this is sour, and that’s a fact” or “this is what sweet sounds like” and the audience is expected to go “that’s right!” but that isn’t how it works. It would have been better to have the viewer decide for themselves what sound goes to what taste, or even make it a surprise. But yes, i did enjoy this particular work, to create something we taste into a piece of audio is hard, and i’m sure to some the artist really captured the taste.

Another work i noticed at the gallery was a large textured canvas, maybe 4ft by 2 ft “Organoid Organic Rose Blossoms Wallcovering, 2016″, by Martin Jehart, made up of flower petals, and Alpine hay mixed with herbs (not specified which herbs). From afar it just looks like a textile pattern, but when getting up close, you can smell the aroma of said flowers and herbs and alpine. I thought this piece was, to put it simply, really pretty. I thought the idea of introducing a natural aroma into a room, which source was more organic than a tin can spraying chemicals was very eco-friendly. However i noticed some of class mates weren’t really observing this piece as much as i was,  not that that’s a bad thing.  Maybe to them, it was plain. Or it wasn’t really breaking new ground, which might be true. But i found the use of flowers and other natural smells, especially in a large frame, was very welcoming and beautiful. 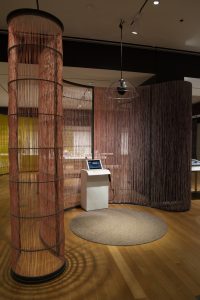 According to some research I did, An overhead speaker plays sounds collected from cities and locations around the world. The piece was created by Shared_Studios, an organization that creates two-way audio/video connections between dozens of cities around the globe. This caught my eye because the phone like gadget was like a way to hear different sounds from different places. I also felt as if some people might have skimmed through this but it was very interesting. 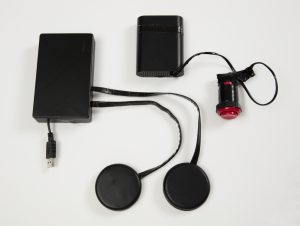 According to some research I did these, Two circular pods are attached to the table. Touch the pods with both hands to feel music as vibration. Vibeat was designed by Liron Gino, a graduate of Jerusalem’s Bezalel Academy of Arts and Design, Israel. This particular design caught my eye because it was very interesting to me. The setup was kind of weird because I first I thought it was a portable charger but it turns out its some kind of gadgets that vibrates sounds when they are touched.

I found this compelling because the lights changes from a bright blue to a warm yellow. The light colors changed when standing under it. The light’s colors can affect our mood and feelings. A bright blue would mean we are awaken and warm yellow would mean we are tired. The materials used to create this was light emitting diodes, aluminum, and glass.

The chairs are designed for use in schools. Apparently these chairs are to help students sit with their spines straight. This is compelling because its similar to a rocking chair and its pretty comfortable for my back and does not make any noise. Too bad we don’t use these in school. The chairs are made from Polypropylene and polyethylene. (Plastic)

The first design that I think I found it compelling was the Tactile Orchestra 2017-2018 designed by Roos Meerman because it was a wall made out of black fur and as you are feeling it and moving your hands around it make this sound of a playing string instrument and depending the motion of your arms it plays it how smooth or fast you’re moving. Roos Meerman is the designer for the tactile orchestra and was founded in 2014. This art work was made from man made black fur and a sensor behind it that plays string instruments orchestra.

Another design that I think it was compelling as well and I don’t think many people had the chance to see it or understand what is was meant for is the ostrich pillow, 2012 deigned by studio Banana because first of all, it’s a pillow for people who often sleep on desks (which I might be interested of getting one for myself) and second it has this funny cubic shape form. It’s an unusual pillow that I don’t get to see it every day and the way it is properly use is you literally have to wear the pillow on your head and face. There are four hole in this pillow, the bottom is to insert your head into the pillow, the front has a big hole that exposes the mouth and nose for breathing comfort and both left and right are for your hand where your head will be resting on. It’s a very cool accessory for everyone to have and I think it will be a good use for college student who likes sleeping on tables.  Ostrichpillow was design by Studio Banana and founded in 2007. 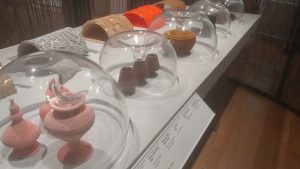 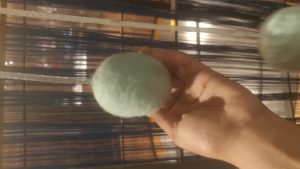 These two images were for your sense of smell. For the first one ,you would be able to smell for example, cotton candy, coffee, and chocolate. I really like this one because the smell was accurate and it brings back memories. The second one was these cotton blue balls dangling up from these silver fabric and that when you touch it, it’s soft and it has a bell inside when you shake it. Also when you smell it ,it has this nice pleasant smell almost like the smell of fresh laundry.