I’m writing to you in regards to your gallery, and propose an art instillation based on my work centered around the theme of altered books, inspired by Tom Phillips work, ‘A Humument’. I am an art student, currently studying communication design at city tech. My personal work, and pieces created within my altered book, both relate to my interest in illustration and love for texture within a 2D space.

My inspiration includes pieces, such as significant words, I’ve discovered while reading through text, then followed by an illustration depicting said word, for example ‘Weal , Shunned, Afflatus, and Osmosis‘ which will all be linked.  For each piece I work on, my technique varies, for some I use slow careful line work, trying to capture the weight of each mark, while others are more quick and tightly drawn. My goal is to use this method of a glossument (finding a word, and providing its definition via blog post, then to later visually show the word) as a means to branch out as an artist. 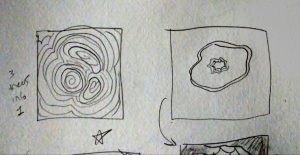 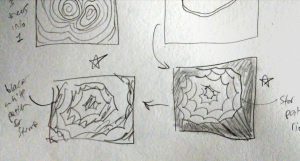 I thought this project was overall fine, i wish i could have used lines and color, but maybe for i future project i might be able to. This project helped me learn that there are many little details in our environment that we often overlook, but it’s good to stop, and appropriate it once in a while.

I think for this project i could have benefited from working more slowly,  like having more time to design the pictures and really working on it, and moving a bit slower when doing my designs in ink.

For our next project i want to focus more on the design element, and give myself more time with the concept so that i can make it more appealing to look at.  Phase 3       Phase 2      Phase 1 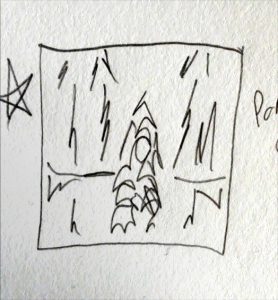 Congratulations to you , our first group of Role 1 posters, for posting about Part 1 of “Ways of Seeing”! Now everyone who signed up to respond can do so. If you need to remember what this whole Roles thing is or how this assignment will work, check out this previous post I made describing what you need to do and when.

Here are the Role 1 posts: from @vhenny space mind, from @bribrianna Brianna M, from @airy Air (E.N.). @rcortes, you were also going to post a Role 1 post–there’s still time today or even early tomorrow morning–so long as the next group has time to read, process, and add their work.

Role 2 folks: that’s @garence, @sruan, and @ezraab. Get ready to post something by Wednesday (again, early Thursday morning won’t destroy us in this first round, especially with the holiday, but we’ll get on  a stricter schedule as this becomes more comfortable to each of us). Read the above posts and choose one to respond to. If someone has already responded, please move on to another until they’re all responded to once before doubling up (this is more a concern for Role 3 this time, since everyone wanted that).

Role 3 folks: that’s everyone else (unless you decide to add to Role 2 just to balance things out). You’ll add your responses by Thursday (or early on Friday, again, just this time). Remember to choose a post that doesn’t already have a Role 3 response until all have one, then make sure it doesn’t already have 2. We want to keep things even, so everyone gets to enjoy the conversation!

This might sound complicated, but it will be exciting to have more of our work read and responded to than all of us talking at once with no one listening!

Hi, My name is Emmanuel Allan. I am from Haiti,i have been in United States for the last 4 years. I speak Creole, French, English. My passion are soccer, filmmaking, screenwriting, graphic design, photograph. My biggest goal is to be a successful storyteller as a filmmaker, photographer, graphic designer. In 5 years I see myself traveling the world and visiting the best soccer stadium in the world and taking picture and making video of the beauty of earth. Right now my goal is to do my best in college, keep my grades high and learn as much as i can. One of my other goal is to go to the 2034 soccer world cup as a referee, i know it’ s a really long goal, but that’s one of the things that will make me very proud .

My avatar is Steven Splieberg. One of the best filmmaker of all time. he has produced movies like the transformer, jurassic park film series,and all lot more film. I put him as my avatar because he is one of the people i admire. I like the way he works. he was listed as the most influential people in America.