“a fore-and-aft rigged boat with one mast and a single jib”- Merriam-Webster Dictionary.

The sentence the word is used in is “The man who assumes that there s an essential difference between sloop and the airplane lacks historic perspective.”

For the word ‘Sloop’ I now understand that it’s actually a name for an object, a type of sail boat to be exact, that has the front and back part of the boat with ropes that help support and move the masts. Along that within the sentence it was use in is to show the comparison between the boat and the airplane not being so different.

Plough is the British spelling of plow

The word was found from Saint-Exupery, Antoine de. “The Tool.” Wind, Sand and Stars. 1939.

The word plough was used to compare to someone believing that machines is the end. But machines are also tools that we will be using just like the plough that is used for farming.

I understand this word now because a plough is a tool that is used to modify  soils and are used in farms for farming. Comparing machines to it is just like saying it will be used the same way.

This word was found in a little excerpt that Professor Spevack gave each student, to show each one of us a new word. So, I got the word tumult and the sentence it was used in was, “The element smacks the sides of the hull with a sound like a gong, and the pilot can sense this tumult in the quivering of his body.” In this context the pilot can feel a noise even through his body, and the previous even describe the noise as a “gong”. 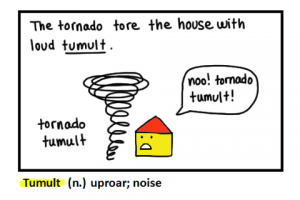 The sentence that this word was used in was “It is as if there were a natural law which ordained that to achieve this end, to refine the curve of a piece of furniture, or a ship’s keel, or the fuselage of an airplane, until gradually it partakes of the elementary purity of the curve of ‘a human breast or shoulder, there must be the experimentation of several generations of craftsmen. In anything at all, perfection is finally attained not when there is no longer anything to add, but when there is no longer anything to take away, when a body has been stripped down to its nakedness.”

The author was trying to convey the idea that perfection is only achieved when the object or machine is reduce to its most simplest state. They use the word fuselage to talk about the airplane which they then compare to a human breast or shoulder. This comparison is used to show that when the airplane’s body (the airplane as a whole), ship or furniture is easy to utilize and recognize it has reached perfection. Like for example you wouldn’t image a plane any other than its original shape that looks like a bullet with two wings attached on the sides. And if you did think about a airplane you wouldn’t think that it would do any other function than flying state to state.

“without variety or change, excessive repetition (or no repetition) can lead to uninteresting compositions.”
– COMD1101 definition

This word came up while learning new words for our project having to do with line & rhythm. This word stood out amongst the other words because I didn’t recognize the word. This word has to do with our project, now knowing the definition, it has to do with rhythm and how in some artwork there is no variety or just nothing going on in the composition. The main definitions aren’t applied to like an art definition however, the one given for our project is. So, many other things can apply to this word because it describes how something can be so boring because there is no change.

Definition:
A woman who is the head of a family or tribe.
An older woman who is powerful within a family or organization.
From my glossument book I heard the owl call my name
Origin: early 17th century: from Latin mater ‘mother,’ on the false analogy of patriarch .
Example:  My great grandmother was the matriarch of our family.
Source: Dictionary.com

Example: Theystood aghast at the sight of the plane crashing.

noun
“a surface appearance of something grown beautiful especially with age or use” Merriam-Webster Dictionary.

This word was encountered through “Wind Sand and Stars” by Antoine de Saint-Exupéry.

The sentence the word was used it was “Every machine will gradually take on this patina and lose its identity in its function.”

When the author uses this word he’s trying to say that every machine ages and becomes irrelevant as new technology gets developed. As the machine’s functions get replaced by a better technology people still love the old machines for the purpose they have served at the time that it was first introduced. The author could also be questioning in this sentence why the old is still loved or, trying to argue that humans dislike change even if it’s for the better which is why they choose to admire the old.

“To reach the highest or a climactic or decisive point”- Merriam-Webster Dictionary.

The word was encounter in the reading of “Wind Sand and Stars” by Antoine de Saint-Exupéry in the last sentence of the first paragraph.

The sentence where the word was use is in “Have you ever thought, not only about the airplane but about whatever man builds, that all of man’s industrial efforts, all his computations and calculations, all the nights spent over working draughts and blueprints, invariably culminate in the production of a thing whose sole and guiding principle is the ultimate principle of simplicity?”

The sentence itself is long and it can seem easily distracting at first. At first not understanding the meaning of it however it becomes understandable that the sentence itself, after figuring out culminate, questions the efforts of man who spend time and time, effort and effort all piling up to reach a ‘decisive point’ in their own view but it turns out to be something simple within other people’s views.

Definition:  to cause irritation or annoyance to – Merriam- Webster dictionary.

Origin of exasperate: Latin exasperatus, past participle of exasperare, from ex- + asper rough — more at asperity

Example:  No matter where you are, your siblings always exasperate you.

The word was encountered through a book called I heard the owl call my name By: Margaret Craven

The author was saying how much a man named Caleb that came out of retirement exasperate him because of his diesel launch. I understand this word because exasperate means to annoy and diesel launches are annoying because of the smoke and pollution they produce.