The song I chose was Juan Luis Guerra “Farolito” I found it very challenging  to visualize and draw something I listen to.I drew some simple  sketches. As well as some textures. 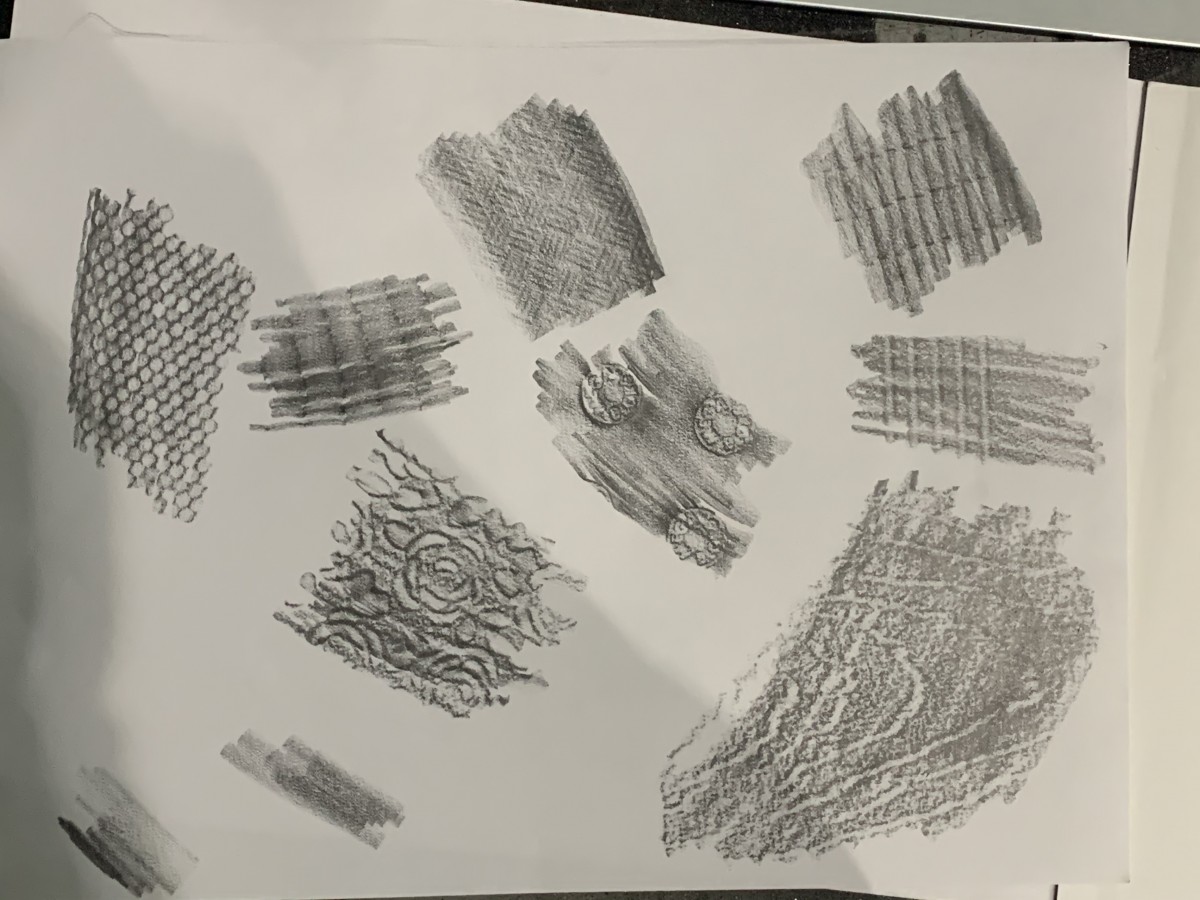 These are my refined sketches 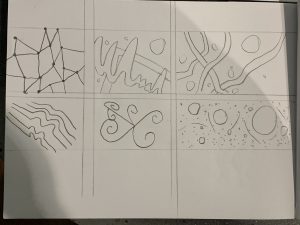 Discover: The song that I chose was Circles, by Post Malone. When I first heard this song, it gave me a nostalgic vibe and the beat was repetitive and makes my feels go in circles. It had a sense of never ending loop and wavy flow to the music. 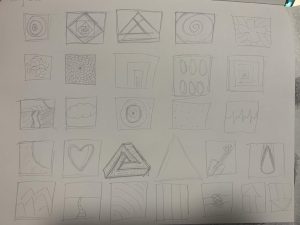 Develop: I used some real life objects to try and create some shapes that reflects the song’s vibe and wave-like patterns. 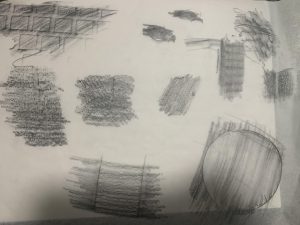 Define: In my final piece, I settled with one big Droste effect pattern where the shape seems to never end and keeps going. I then added wavy patterns to represent the flow of the music and the sound that it gives off. I also put some spiral flower type designs to make it seem like its spinning and repetitive. 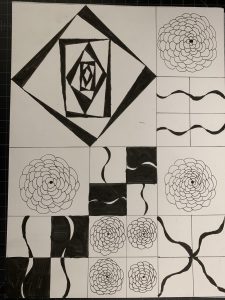 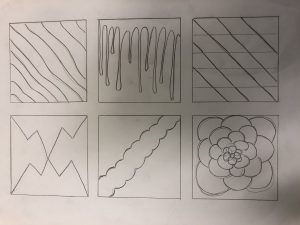 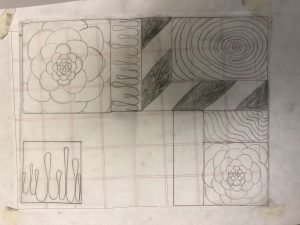 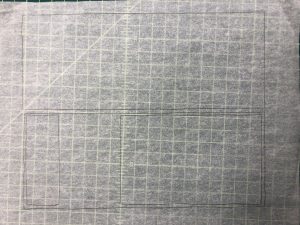 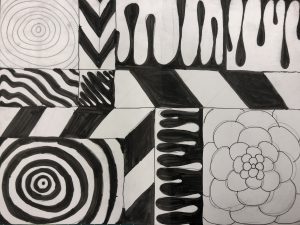 Inking was very difficult an it didn’t brush the way I wanted it to. The project had many different steps that was difficult to keep all together and in place, everything was kind of all over the place. Over all the finished product looks okay. I will try to take more time on it and think about organization more. 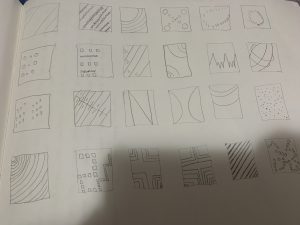 The song I chose to use for this project was “Ransom” by Lil Tecca. Reason for choosing this song was because I liked the vibes that the song gave off and it was just a calm feeling and always got me hype for some reason. And once I found what song I wanted to use I started creating shapes and patterns that reminded me of the subtle but repeating beat throughout the song. As well as , the small increments of the added bass throughout. 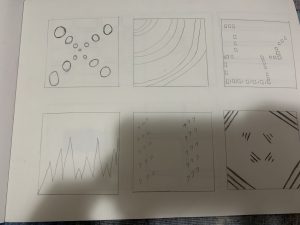 These are the 6 sketches that I chose to refine because I felt as if these catered most to what I hear(visually) as I listen to the song. For example the picture in the bottom left shows the beat as the beat goes “doo, dooo, doooo” as in a small note, to a higher one and a higher one after that, drops then repeats which is why I drew those spikes I guess you could call them. 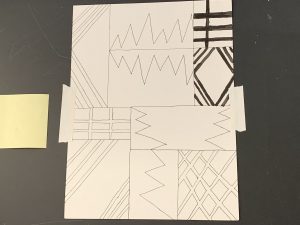 And this is how the final project came out. I wanted to add some more inking to some more parts of the drawing but I could not find my inking pens in time. And looking at it now I don’t think I would’ve inked everything because I feel as if the contrast between the patterns is great. But I do wish I could’ve added more. 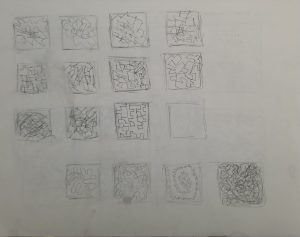 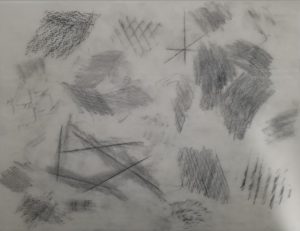 I chose the song “Revenge, And A Little More” by Unlike Pluto, because I liked the beat and the way the song flowed nicely. While designing the patterns I thought of the song being both sharp and smooth which is why some of the patterns have squiggles and corners.

Out of my initial patterns, these six are the ones that I thought were really interesting. For the final inking piece, I chose the two middle patterns since I felt it represented the song with its sharp and smooth beat. 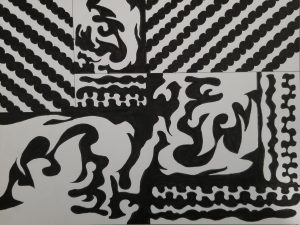 This is the final product on bristol, using the two patterns from my refined patterns both resized and rotated in a grid layout. The two patterns on the top corners are a texture that I felt represented the repetitiveness of the song.

While doing this project, I learned that letting yourself draw what you hear is an interesting concept for designing. I’ll probably use this concept during my free time when I’m listening to a song that has a rhythmic beat to it. I feel like I could have maybe reversed the black and white on certain sections of the piece to see if it would stand out more, but overall I like how it turned out.

The song I chose was “Piensan” -myke towers. I liked this so much I listen to it all day every day because of the good beat. When designing patterns and shapes I imagined the sounds to be all over the place and also mellow. 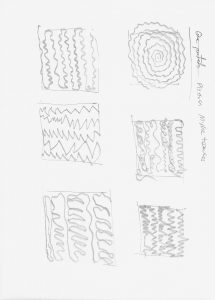 After designing the patterns and shapes heard from the song; we had to find the texture and reimage them in our sketchbook. I found these as the most intriguing pattern so I redesign them into the design to see below. These Designs came from crushed paper and the design you get from paint splatter which made my drawing of sound different. 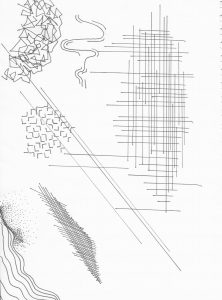 The end product was a bit different because I used the same texture but I didn’t know how to use them. The product I found was very cool and different because it was what I imagine it and was really happy about how it came out. I did decide not to color and parts because I really like outlines instead of fill areas. 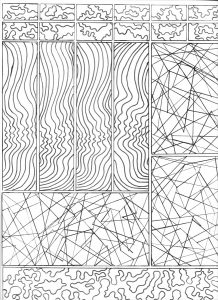 I really am happy about the end product and how it came out. The idea I feel is a bit all over the place and could have done more clear but I do like it. 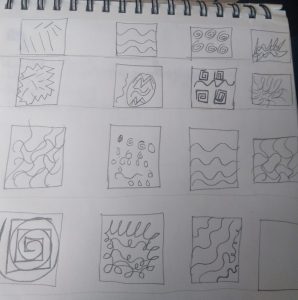 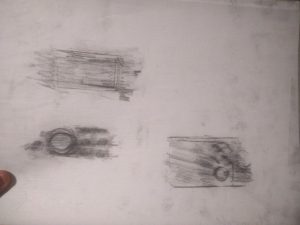 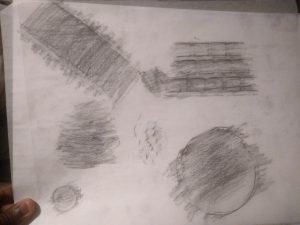 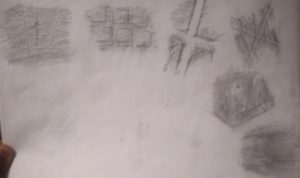 The song that I chose for my patterns is single again by big sean. I feel like this song flows nice so that’s why there’s a lot of wavy patterns.   I feel like the song sounds nice and smooth with the flute playing and singing at the beginning of it before it goes into a repetitive beat for most of the song. Near the end, it switches and the flute disappears and its more of a bumpy and smooth beat. There’s also a repeating beat so some patterns repeat themselves. There’s a beat switch near the end so I created some different patterns 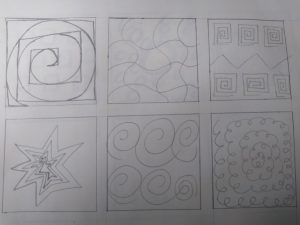 These are the 6 patterns that I chose to recreate. The wavy design represents the flow of the song. After this, I chose a pattern and texture to use in my final piece 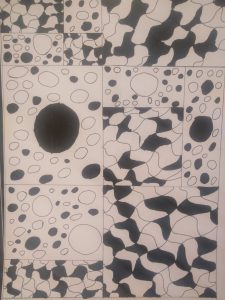 This is my final. I used the wavy design that I used when I first started my patterns and when I recreated them and the texture a pattern I found on a remote so I recreated it to look like that. The wavy lines represent the flow of the song and the circles represent how to beat repeats itself until it switches. This project taught me how to use sound on paper

Discover– The song that I chose was Eastside by Ken Valor. I chose this song because it was made by a classmate and one of the first people that I became friends with in college. I did not know he was so talented and the song became one of my favorites songs at the moment.

Define– These are my refined sketches. I ended up choosing 2 of my 6 refined sketches to do the final design. I used different sizes and rotated the sketches so that they could match the beat of the song.

Develop– My final piece is made up of the 2 designs that I chose. I used the sharp sketches to represent the beat that plays throughout the song. And I used a big portion with a design that I later repeated multiple times. The bigger sketch represents the beat at the beginning of the song which is a soft sound that sounds like a piano. I used the same sketch repeated around the bristol sheet to represent the beat that plays throughout the verses of the song.

Deliver-Doing this project was very fun because this was something new for me. I never tried to visualize sound and now that I got a chance to do it, it is a cool thing to do. The project got harder as I advanced from my discover part to the developing part which was the inking and making the final design. I got some positive feedback from my classmates. Some of my classmates liked the patterns I chose because it fits the song. I also got constructive feedback during the critique in class, I was told to shade the designs where I wanted people to focus, I was also told to rotate and move some of my sketches around which I took into consideration and I fixed it after class.