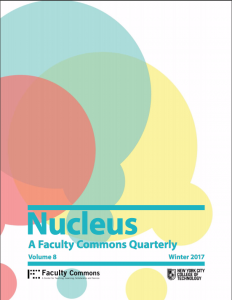 This week we’re spotlighting the recent issue of the Nucleus (Winter, 2017), our Faculty Commons Quarterly. This season’s issue features pieces from faculty about the creative ways they’ve used the OpenLab in the context of their courses and/or research. Specifically, faculty discuss engaging students through creative and interactive assignments that incorporate multiple forms of media and dialogue, how the open and archival aspects of the OpenLab enable past students to share tips and strategies with newer students despite never meeting in person, how course sites can act as nodes in larger networks of resources that may benefit students academically, professionally, or otherwise, how to carry out collaborative student-faculty research projects, and how other innovative learning resources such as OERs and WeBWorks enrich students learning AND can help keep educational costs down for students. We hope you enjoy!

A hearty thank you to the Faculty Commons for their enthusiasm and support with this issue and always.

This week we’re shining the spotlight on Professor Krondl’s Culinary Tourism course (HGMT 4989). This course facilitates students exploration of the concept of culinary tourism, and highlights its impact on the tourism industry. The first thing you notice about this course site is that it is easily navigable. In the top menu, students and site visitors can quickly find information on assignments and field trips, as well as download a copy of the syllabus. Organization is essential during the first few weeks of class, particularly because it sets up student’s expectations of the class and helps them prepare for successful completion of the course.

From the course site, it becomes quickly obvious that Professor Krondl’s course is organized around a series of experiential assignments that get students out exploring the city around them. These assignments are organized around four field trips that take students to different locations across the boroughs of Brooklyn, Manhattan and Queens. These trips are accompanied by brief prompts that ask students to examine the culinary tourism of a particular neighborhood in relation to its historical and contemporary contexts. In the context of these assignments, the course site primarily serves as a place for sharing analytic reflections of their experiences with the class and beyond.

This is a great example of how to use your course site to support your assignments while not limiting them. Here at OpenLab, the objective is not necessarily about what you can do with the technology we’re offering, but how can this technology support you in your pedagogical goals.

For more information and/or to meet with us one on one, attend a workshop or come visit us during an office hour! We also have two upcoming Open Pedagogy events – we hope to see you there!

This week we’re spotlighting City Tech’s Energy and Environmental Simulation Laboratory (EESL). EESL is a research group organized by Professor Masato R. Nakamura in the Mechanical Engineering Department at City Tech. Though a research group, this group is open to anyone interested in conducting research on energy, environmental engineering and computing for sustainability. We’re spotlighting EESL’s site this week because of their clear presentation of content. EESL’s site is very easy to follow. Their site cleanly houses information on the group’s goals, work, activities and membership. Each page is organized around images, information, and links that can connect readers to more information. In addition to being easy to follow on its own, the consistency in style across pages helps the reader navigate the site more efficiently, feeling familiar on each page before taking in the content. The significance of this style of site presentation is that it is easily translatable in professional environments. In this way it offers Professor Nakamura and his colleagues a place to send other scholars and researchers if they are interested in learning more about their work. Additionally, it provides students with documentation archived chronologically overtime that speaks to – and shows – the work they’ve completed for the group. In sum, EESL is an example of site that has a strong public, professional face that can be interfaced with by an array of others – who might find the work interesting, might consider joining the group, might be assessing one of the member’s skills in relation to another position. In this way, it is an example that speaks to the reach of what OpenLab can offer its users, beyond their experiences here at City Tech. 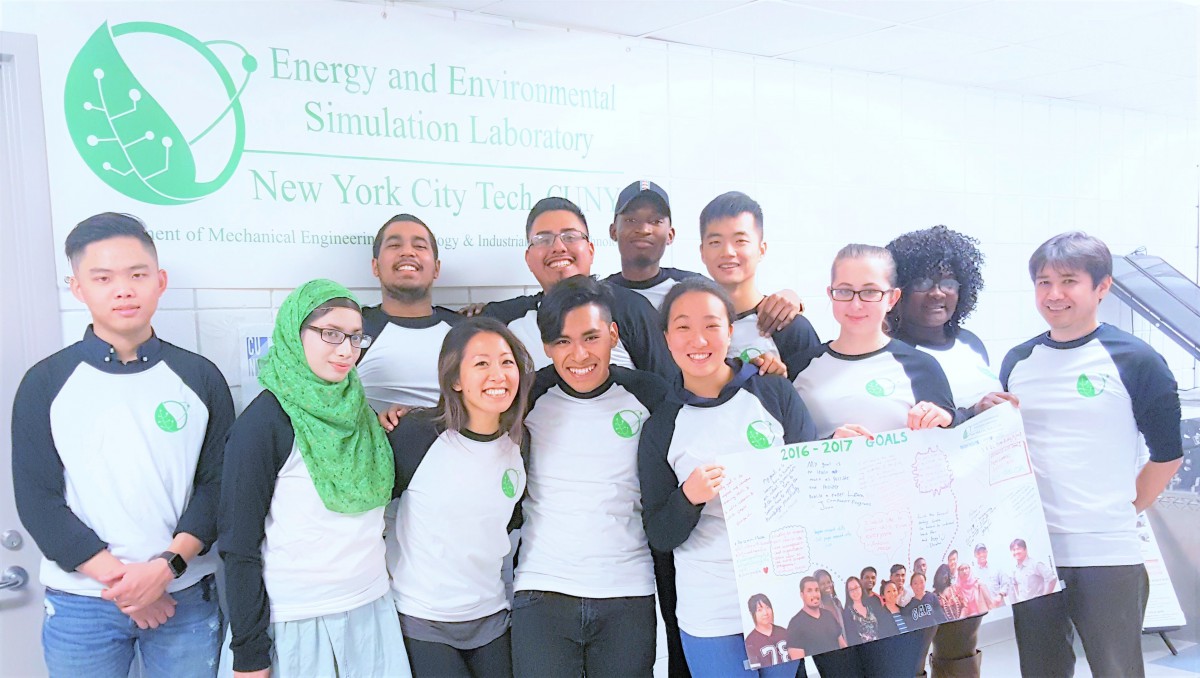 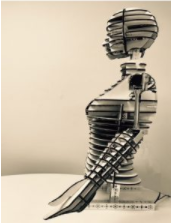 This week we’re spotlighting CityTech’s own “Roboquín”. In addition to being a seemingly futuristic mannequin robot fashion model that can interact with people via Bluetooth and Wifi connectivity, Roboquín is also a larger multidisciplinary project composed around the construction and showcasing of the mannequin robot (hereafter the robot will be referred to as RoboQueen and the project will be referred to as Roboquín). Though supervised by Professor Farrukh Zia of the Computer Engineering Technology department, this project is comprised of professors and students from a range of departments including Architecture, Mechanical Engineering, and Computer Science Technology. In this way, Roboquín is an excellent example of how OpenLab can facilitate cross-disciplinary communication and workflow.

In addition to a description of the project and its members, the group uses their site for two purposes. First, they use the site to showcase ‘the travels’ of RoboQueen – from the 2016 World Marker Faire in Queens to CityTech’s own Annual Open House – and the visitors it has dazzled.

Second, Roboquín’s project site hosts images and information detailing the construction of RoboQueen, and includes links to resources that could be used by another team in the construction of their own ‘RoboQueen’. Beyond the potential for visitors of Roboquín’s site to replicate the designs, this information is emblematic of the kind of transparency OpenLab affords its users.

Together, these two qualities allude to another important affordance embedded in OpenLab’s infrastructure – the ability to archive information in a centralized, organized and chronological way. Beyond sharing information, archiving is a critical process in project development as it allows one to see where a project has been and envision where it might go in the future. 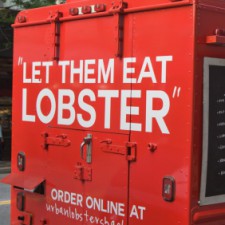 In Prof. Michael Krondl’s section of HMGT 1102 – Introduction to Hospitality Management, students can easily find the course syllabus, assignments, and readings. But most exciting about the site is the space it offers for students to blog about their visits to Smorgasburg and the Chelsea Market, complete with descriptions of the venues and mouth-watering photographs of the food. As a final project, teams of students will further use the OpenLab site to complete a concept of a New York City food truck, including a menu, standardized recipes, and spec sheets for the central ingredient of each menu item. Check out this site for a great example of student reflection, photography, and teamwork on the OpenLab — but not if you’re already hungry.

Curious to see how other faculty are organizing their course sites? Check out Prof. Ikuyo Nakagawa’s ARTH 1108 – Art of Asia. The course site is cleanly laid out, with menus that make it especially easy for students to find the syllabus, schedule of classes, assignments, and quizzes & exams. Prof. Nakagawa will be adding information about museum visits and extra credit throughout the semester. The site structure is functional, intuitive, and clear. Check it out to see a great example!

Faculty members — Will you be planning spring courses over the winter break? Do you intend to use the OpenLab next semester? Would you like fresh ideas for your pedagogy? If so, check out L4: Living Lab Learning Library! L4 is a resource exchange for innovative teaching practices, where City Tech faculty can interact with each other and a community of educators at large. As the site says, the grant-funded project was designed to re-envision General Education as a “living laboratory” using City Tech’s signature strengths — hands-on experiential models of learning and our vibrant Brooklyn Waterfront location. Brought to you by the Gen Ed Seminar, the OpenLab, a Culture of Assessment, and the Brooklyn Waterfront Research Center, the site offers a one-stop shop for teaching and education resources — including tools for research and assessment. Want to learn more? Check out the site or contact L4 Coordinators Profs. Anna Matthews and Laura Westengard. 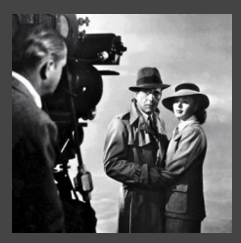 In Prof. Sandra Cheng’s ARTH1112 – Introduction to Film-Hybrid, students blog and comment about the films they watch. Check out their thoughts on Pirates of the Caribbean, Reservoir Dogs, and the 1978 version of Superman. For extra credit, they get to visit MoMA or the Museum of the Moving Image. And in case you need any movie recommendations over the holidays, look to the course home page for Prof. Cheng’s comments on the films they’re watching for class.

In Our Places: How We Commemorate, students in Prof. Mary Sue Donsky’s course LAW 2301 Estates, Trusts and Wills, a research class, explore memorial sites of the deceased. Taking their legal study out of the classroom, they research and photograph these sites, taking a close look at the ways that we commemorate the dead. Then they share their learning and reflections with each other. Examples include memorials for celebrated baseball player Tony Gwynn, for the actress Anita Ekberg, and for those lost in 9/11. Take a look to see more. 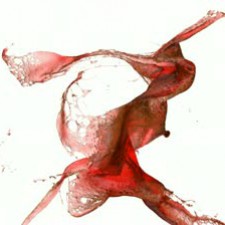 In Profs. Karen Goodlad and Robert Dagorn’s course, students are learning about the art and science of wine making, blending, and tasting.  They have recently made two visits to Red Hook Winery, where they were able to take part in the wine-making process and create their own blends to pair with a particular meal.  You can view photos and read their reflections on this visit and the excellent hands-on experience they gained.  If you’re lucky enough to visit the Janet Lefler Dining Room at the right time, you’ll be able to taste their blends!

If you need additional help, contact the OpenLab Community Team, or join us online for virtual office hours.