The event I had gone to was called Life after Pratt at the campus library. They had four guest speakers Shiana Garfield, Jared Oriel, Bao Ngo, and Maria Arenas. The event was to inform those what is it is to be a designer after they have graduated from Pratt University. They started off driving into their careers from the beginning to their current works, work status, etc. Their goal was to be very raw when it came to their experiences because each of them had a different roadblock they encountered. It’s not necessarily a smooth ride once you leave college to find a workplace that fits your needs. Sometimes you need to work in places that you don’t feel comfortable in but to gain experience for a job that suits your needs. They really stressed that becoming a designer in the real world isn’t as easy as it may seem. Although, with hard work and great work ethics you can find the right fit for you as a designer.

The first designer to step forward was Shaina Garfield who is a designer focused on environmentalism, intersection, and disability. Her general focus is to make a change with her work through design, education, advocacy, and research. When she first began she spoke about graduating Pratt past may with a social design degree. The first week after she ended she went to Nepal with OI, class she had taken where they designed desks for a nonprofit organization. Then in the fall, she started working at Frog Design doing a with fellowship With X Frog. They partner with disabled creative people to educate frog on how to design with disability design, Interactive design, etc. In short, give them a reminder that there are people with a disability so keep that in mind before you even start creating something for all to see. With that all in mind, she realized she did not enjoy consulting so Frog was not necessarily the right fit for her. Though throughout that time of working there she decided to create her own jewelry line on the side Shaina Leigh Jewelry. Fast forward due to a thesis she wrote for a class she wanted to bring to life the idea of a biodegradable coffin called Leaves. The coffin’s rope has a dye embedded with spores so once the body is buried, the fungus grows to speed up the decomposition. Most importantly, the fungus eats the toxins in our bodies so only nutrients go into the soil. A tree is then planted above the burial site creating new life. Soon to be developed once she has the right investors willing to help her achieve her goal.

The second designer to speak is Jared Oriel who is an Illustrator, Designer, animator. Currently, he is working as a junior designer w.w. Norton and freelances in editorial design. He got hired by BuzzFeed to design a piece for them which was an animated gif of how temporary furniture is in modern time. That piece guided him to work with clients Ted, Atlantic Records, Netflix, WIRED, and A&E Network. All due to his illustrations being recognized by The Society of Illustrators in his senior year at Pratt. He even showcased sample emails a client might send him asking for work. They also may want a mood/theme/color palette for the piece and or reference a previous work that he may have done. He even expressed what he was not fond of when a client asks for much more than expressed earlier. For example, when asked for a static image and then ask for animation since its twice effort to make. Therefore, he stressed to make sure you give them a budget based on what they proposed for you to do. His design career stemmed from his illustrations at Pratt before that he was more so into typography and book covers, etc. he went from a freelance Illustrator to an in-house junior designer for Norton. To conclude, he stressed that it’s ok to have a favorite design but in the real world the client/company has the final say in what design will be chosen.

The third designer is Bao Ngo who is a photographer/filmmaker who is based in Brooklyn. She spoke about how her career started after leaving Pratt earlier than she wanted. Bao had to take an early leave from Pratt due to personal circumstances from mental health to financial problems after two and a half years in. She was raw and honest about her situation since these sort of things can happen but its best to keep pushing further. She regrets not continuing due to her wanting to get the full use of her schooling. Not able to make any networking connections with others due to her short term time there. Though she began to work at service industry jobs while doing designing on the side. She would get rejected from jobs in the design field but, speaking to others about it the reality it’s normal. Freelance became her best option so she began to focus on photography and film work. In addition, she mentioned she stopped doing fashion for photography due to unreasonable pay. Bao was not supportive of that so she decided to be against it and no longer do shoots focused on high fashion. She did work for Delta Airlines, Mitksi album cover [nominated for a Grammy in 2019], New York Times, and Garage.

The last guest speaker was Maria Arenas who is currently a Senior Designer at a small firm called Tandem NYC. She had come into Pratt as an international student which framed her decisions for her time spent here in New York City and her education. Then she gave us a timeline of her time spent at Pratt and what she did outside of that. First was an Internship cause most people she knew were doing that and she felt like she had to. Maria took one at a small firm working with 5 others and she learned a lot from it. They wanted to higher her as a junior designer there but she declined to figure out what she wanted to do. Maria’s thought process was is she here to get a job or here to get the most out of her education as an international student. Then she decided to take on work study to earn her some professional experience as an internship would and earn money. She chose Creative Services at Pratt and they did brochures and course catalogs, posters, etc. Fast forward she began working at Tandem NYC which paid less due to it being a small firm but she was glad she had taken on the job. In addition, she mentioned tips to forwards your career in the workplace. For example, Work hard, be professional, always be on time, your work ethics proficiency is just as important as your portfolio/work. As well, making sure you advocate for yourself, get paid on time/get paid for what you are worth as a designer, and to speak up for yourself/ideas. Further,  as a designer get shut down a lot and sometimes you may not love your job. However, keep pushing forward and you will learn from these experiences to figure yourself as a designer and what you want.

When the event completed we were given a chance to speak to the designers and I decided to speak to Saina Garfield first. I asked her what would be the best approach when trying to put yourself out there design field wise. She found the question tricky but she mentioned to put work out on social media [I.g. Instagram, Facebook] and especially Behance. To continue making designs for things that you are passionate about since your best work comes from that. So with that comes people who are interested in your work and potential jobs may come forward. Afterward, I got a chance to speak to Maria Arenas for what is the best advice to give for a good portfolio. She mentioned keeping it to a minimum of your best works but also with some recent/first works. She stressed that its important for a person highering you see your progress and your potential as a designer. 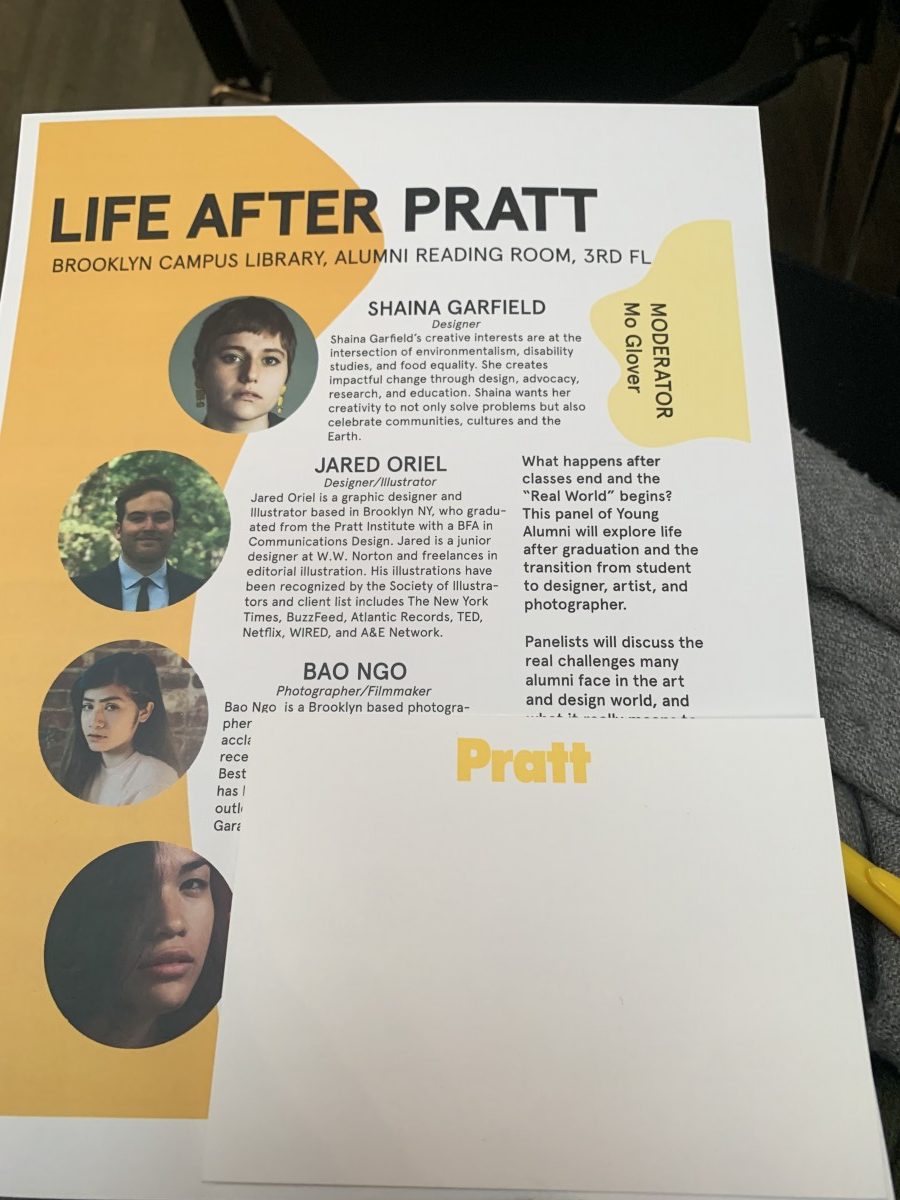 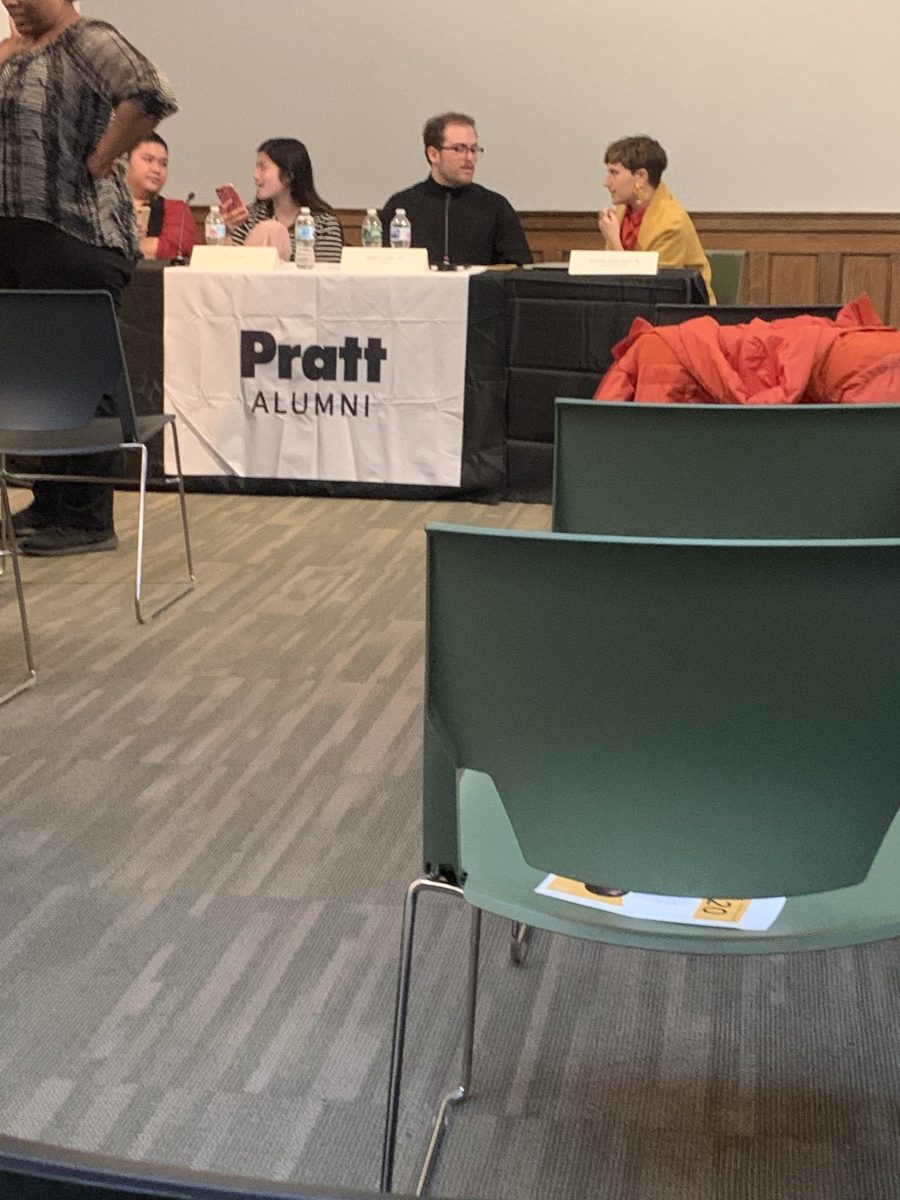