The event was Friday the 18th where I attended a virtual panel discussion on the state of black design. The event was partnered with Texas State University with the moderator being Omari Souza who is an assistant professor at the campus. This was my first real experience when it came to attending a virtual event but also networking as well. I’m particularly really glad I chose this topic since it is very relevant to what’s going on in society now. It was quite a mind-opening experience helping me see what black designers deal with situations given the odds against them. While listening to all the experiences of the panelist it’s put into perspective that I am a Latina woman with a light complexion I have an advantage in life but also the design field. Sadly, this is a reality that someone who is of black has to face in the work field when they apply or more than likely they are chosen as a diversity hire. That which in of itself is quite degrading when their work should speak for itself while hiring rather than adding someone to a team due to their color of skin/ethnicity they appear. I feel talking about this is a very sensitive/controversial topic but it’s something that this event helped me see further as a fellow designer and as a BLM ally.

One of the panelists Sam Adaramola particularly speaking on the lack of diversity if you have a job and can help someone get in that workforce is important. He said that as a non-black person asked him what can we do and his response was “We have to look after our own so if the gate is open we have to bring others in, we need allies, We can’t do it ourselves, we need tose allies and those who will advocate for us and speak out for us.” He stressed to make sure you bring in those who are at a higher disadvantage if it is possible by diversifying the field, especially since only 3% of the design community is black stated by Bekah Marcum. The black designing community just wants to thrive as any other group of individuals in the workplace. I remember a situation where something similar happened to a friend of mine in college looking for a job. My friend who is African American Woman was looking for a job and would always tell me people there competing for the same job. She would get a bit discouraged since she knew about the likelihood of her getting the job would be slighter more difficult as an African American and a woman. Though she would keep hopeful and positive until she managed to get a  job and after a while, she managed to become an assistant manager due to her hard work and ethics. Now she makes it a point to use her power/connections to help others in that same disadvantage as well.

Looking back on the event and processing a lot of the information and topics that were discussed in the live stream have made an impact on me. I knew designers had it difficult in a general sense since it is a cut-throat and competitive field but I didn’t know the finer details when it comes to what black designers have to face. I found it intense to realize that I have such an advantage in this field and it disheartens me to think about it. It’s also sad that even when someone who is black enters into the design field they feel partly alone and not in a particularly safe space (for black designers in companies who often neglect black voices). They feel a bit ostracized when they can’t find someone who looks like them to relate to in the job especially given the lack of diversity in the industry. Not only that but to find out that there are companies like Aunt Jemima, Uncle Ben who have racist pasts trying to rebrand but is it truly enough to erase their past that is so embedded in the minds of those who grew up using the products, etc.  Aunt Jemima’s brand origin and logo are based on the song “Old Aunt Jemima” from a  show performer and reportedly sung by slaves.  However, the website fails to mention Green was born into slavery which makes me ill at that thought of supporting this brand through ignorance when it has such a degrading reputation to the black community. I didn’t realize that these conversations between the designers would help me see what I had not noticed before the event. It sets a tone for me as a designer and an ally to research and put the time to know the past of companies I would like to work for. The more diversity and respect in the workplace makes for a more comfortable and safe space for those within. I want to look for those qualities so I know I’m supporting a company that values everyone regardless of race, religion, gender, sexual orientation, etc.

I checked out Maurice  Cherry’s award-winning podcast revisionpath.com they showcase of Black designers, developers, and digital creatives from all over the world. Through in-depth interviews, you’ll learn about their work, their goals, and what inspires them as creative individuals. His latest podcast was on Shayla Hunter who is an illustrator, brand marketing strategist, and the creator of the 100 Black Females* project (which is a creative look at what it means to be a Black woman or girl today). She shared how she began her career in publishing in NYC during the 2000s, including the time during her master’s program at SVA studying under Debbie Millman. As well as going into why she shifted her career from visual content to strategy and talked about how The 100 Black Females* Project started from then to now. 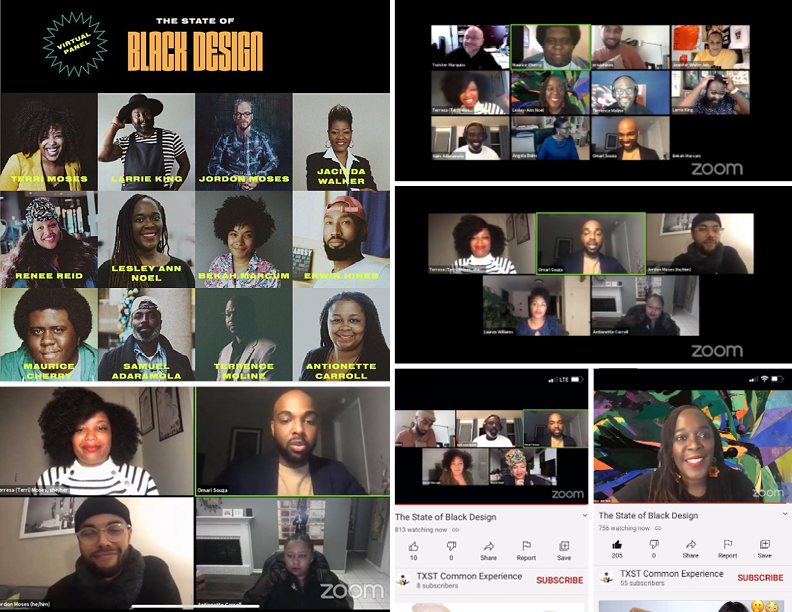