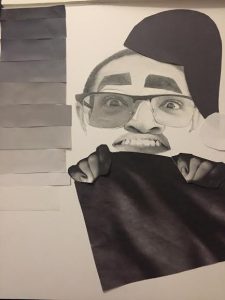 For my final collage it took me a long time to create something unique. Since we’re on Project 3 already I wanted to create something that was different in which I added a little hat cut out form the carvings of my dark tabloid images so that it resembles a sort of festive theme background. I got this inspiration from my third collage, but decided to add a little bit more so that it can give it more life. I also cut out a piece of my sweater from one of my lighter darker images from my tabloids so that it acted as a blanket. I also decided to incorporate hans from magazines that were actually holding onto something, but I decided that I wanted it to clench onto the blanket. The focal point for this collage can be a variety of things, but I wanted it to be the different tones of my eyes and mouth. I’ve decided to keep my grey scale simple by going downwards from dark to light. This project was really fun and it gave me so many ideas on how to push this through. 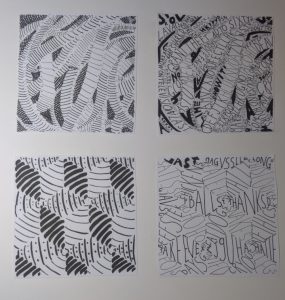 This is my final composition with the line pieces on the left and the text on the right. 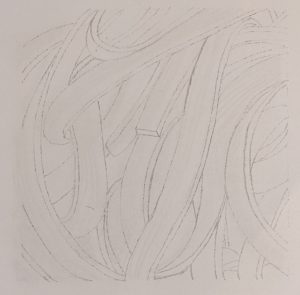 this is the sketch of the pasta 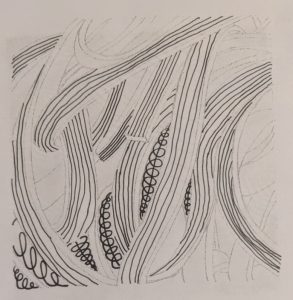 on this one, I tried to have vertical lines along with the pasta and curve line for the dark area but then I realized it doesn’t work well with each other. the hardest part of this idea is that it is hard to make the lines look even. 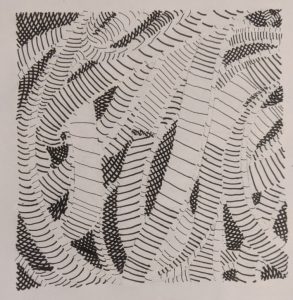 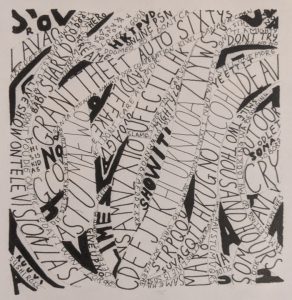 this is my final composition with text on this on I chose a san serif typeface with the dark area using bold and the lightest area using condensed / light version of the typeface I found this is really fun and the bold text really stand out compared to the rest. 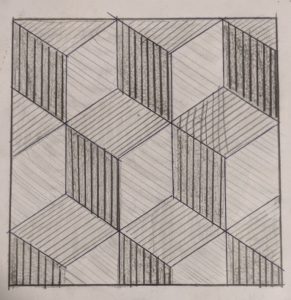 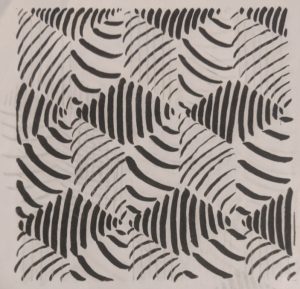 I really like this idea because it does show a clear difference between the darker and lighter area but on this one, the position of the dark and light area is incorrect. 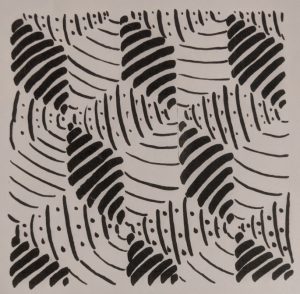 this is the refined version of the same idea where I use lighter inking pen for the lighter part and thicker lines for the darker part. I also add dotted lines in one of the areas. 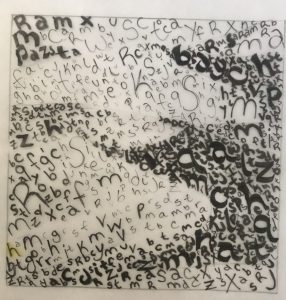 While doing the lines I recognized that the texture of the dunes was part flowing down and the other part was static with no movement at all. I decided to represent this with a mixture of fun, serifed type to represent the flowing sand. While the san-serifed typography represents the parts where the sand texture looks static. 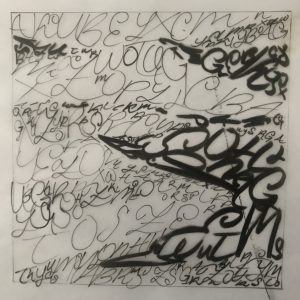 This was the first type drawing, I was still figuring out the thickness of the lines and the typography I was going to follow. Here I did all cursive with inking brush and pen. 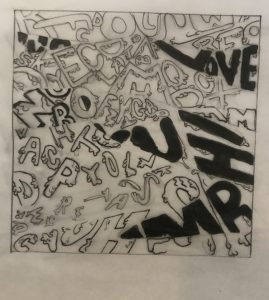 Again a more artistic approach. The typography was more of a statement. It says: Sloggishly flowing down. 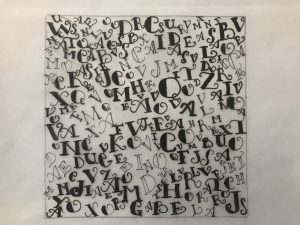 For this ornamental pattern, I selected medieval-looking, ultra-serifed typography perfect to give that retro feeling that I got from the original picture.

I felt an ornamental and retro mood from the pattern. Therefore I started studying Ornamental lines.  Drawing different ornamental lines of several widths allowed me to create a pattern to work with and guide me while I was working on the bigger picture. 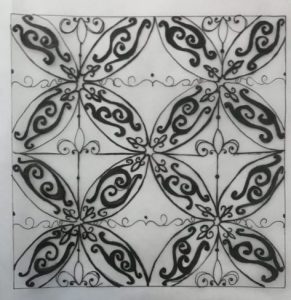 For this line pattern, I selected a theme which was the “Fleur-de-lys”. The fleur is very representative of the ornamental designs and found it a perfect inspiration for this design. I based the darker colors of the composition just by the thickness of the pens and not by repetition and filling the space. 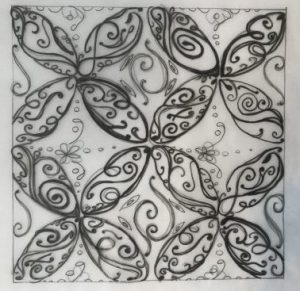 Pattern Line drawing with ornamental and retro lines. Repetition and thickness allowed me to make the darker spaces seem denser and fuller. 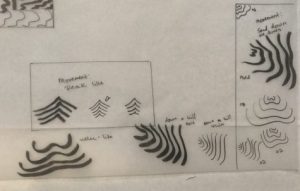 The texture picture I selected had sand dunes in it, this picture made me feel tranquil and serene. In the following case study I decided to test how lines could mimic the downward motion as sand in the desert dunes. I tested several line designs of different thickness to see which most effectively  conveyed a sense of smoothness and flowing motion the sand has while it trickles down from the dune peaks. I followed my designs taking these lines as inspiration 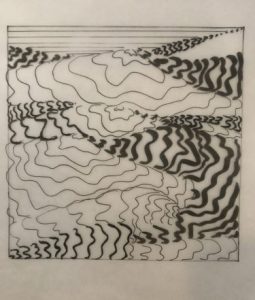 First texture line composition, simple lines that went down recreating the downward motion of the dunes. Here I tried to understand how to represent motion through lines. Mostly used the ink brush to represent shadows. 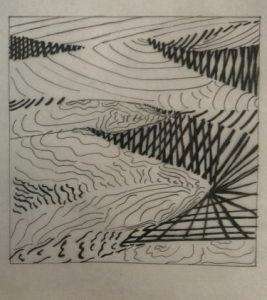 This is my second composition trying to understand how the different lines give out different feelings and emotions. 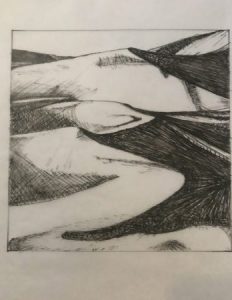 In the third ink composition I decided to go all out and get artistic with the lines. Traced each line with thin ink pen, this was great because this gave me greater understanding of how the shadows and highlights worked in the original picture. After I was ready to continue to the second part of the project 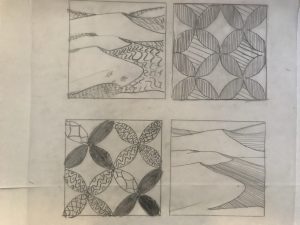 First ink compositions. Later I realized outlines weren’t necessary. I was searching for lines that would set the tranquil and ornamental mood I set for both pictures.

My Texture portion of this project required the most effort to get the results I desired. I did over 6 sketches. In the end, I like my decision to incorporate very zig-zag lines it made the piece look more messy and uneasy.

The Pattern design made e feel a sense of entrapment like I was stuck and couldn’t get out. Somehow the was more easy for me to convey than my pattern. I loved the lettering part of this process it was very fun and felt creative.

Overall I would say that this project was very time-consuming but I enjoyed learning about the creative process and repetition that allot of professors talk about. 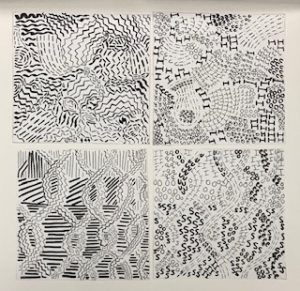 The Texture of the pasta reminded me of a chaotic feeling a feeling of uneasiness. The pasta turned towards different directions and was overall very messy looking. I tried to convey that in my work. This was the first design that came to mind and i think it was too clear and not messy enough so I explored more. 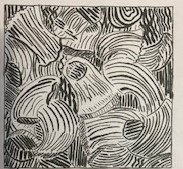 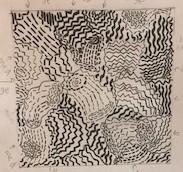 For my pattern, I saw something more clear that looked like entrapment and I conveyed that in my image. Entrapment but simplicity at the same time. 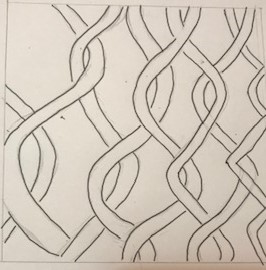