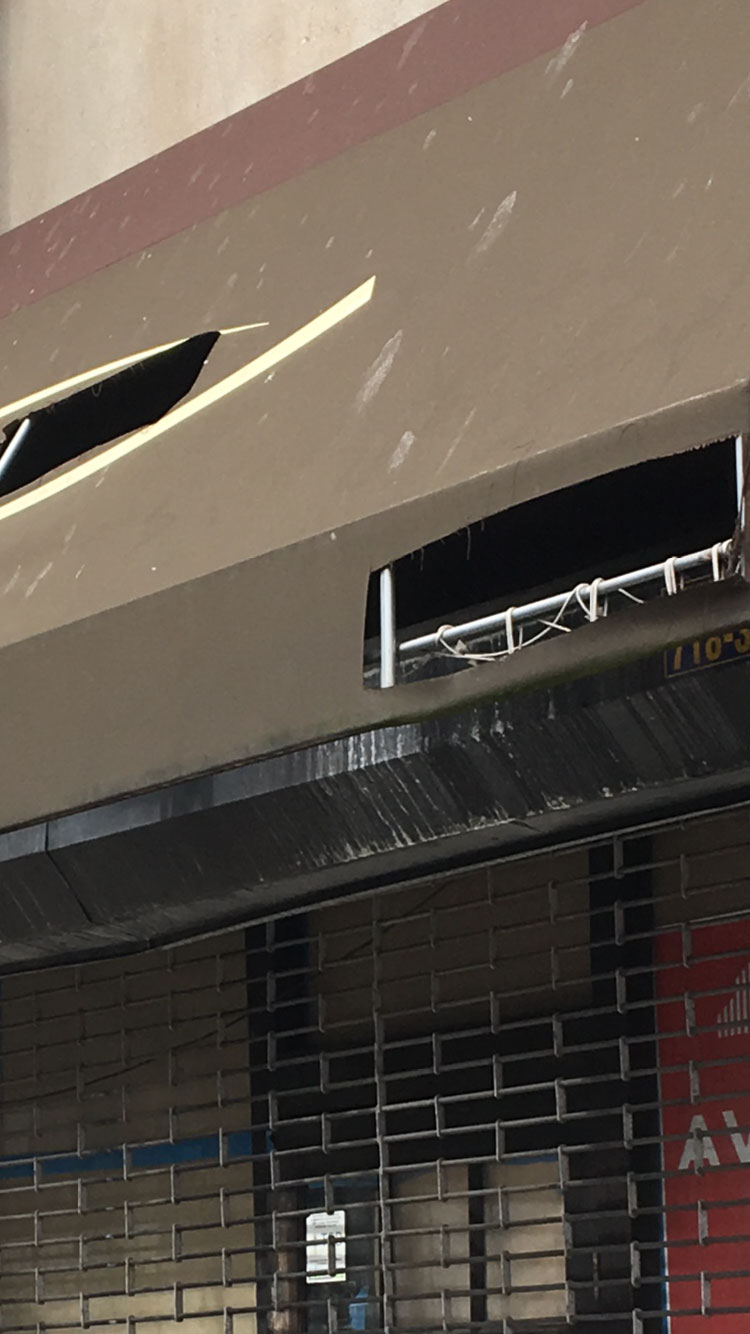 Image 1 Ambiguous
This sign used to belong to a lively retail establishment that sold many goods to welcomed customers. Many people were happy with the store, including employees and customers. With time going by, people have lost interest in the store and the store has gone bankrupt. This has lead the store to become abandoned and the sign that was hung proudly above the store has deteriorated and destroyed throughout time. 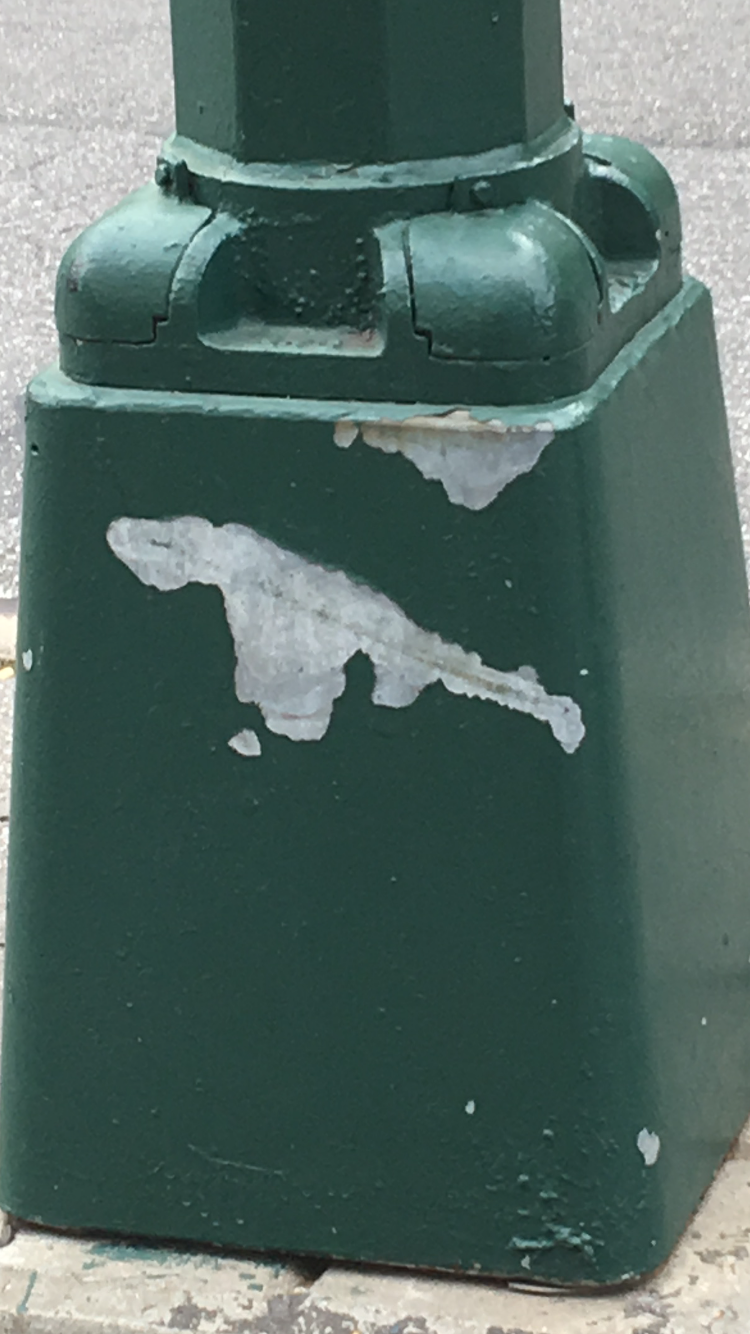 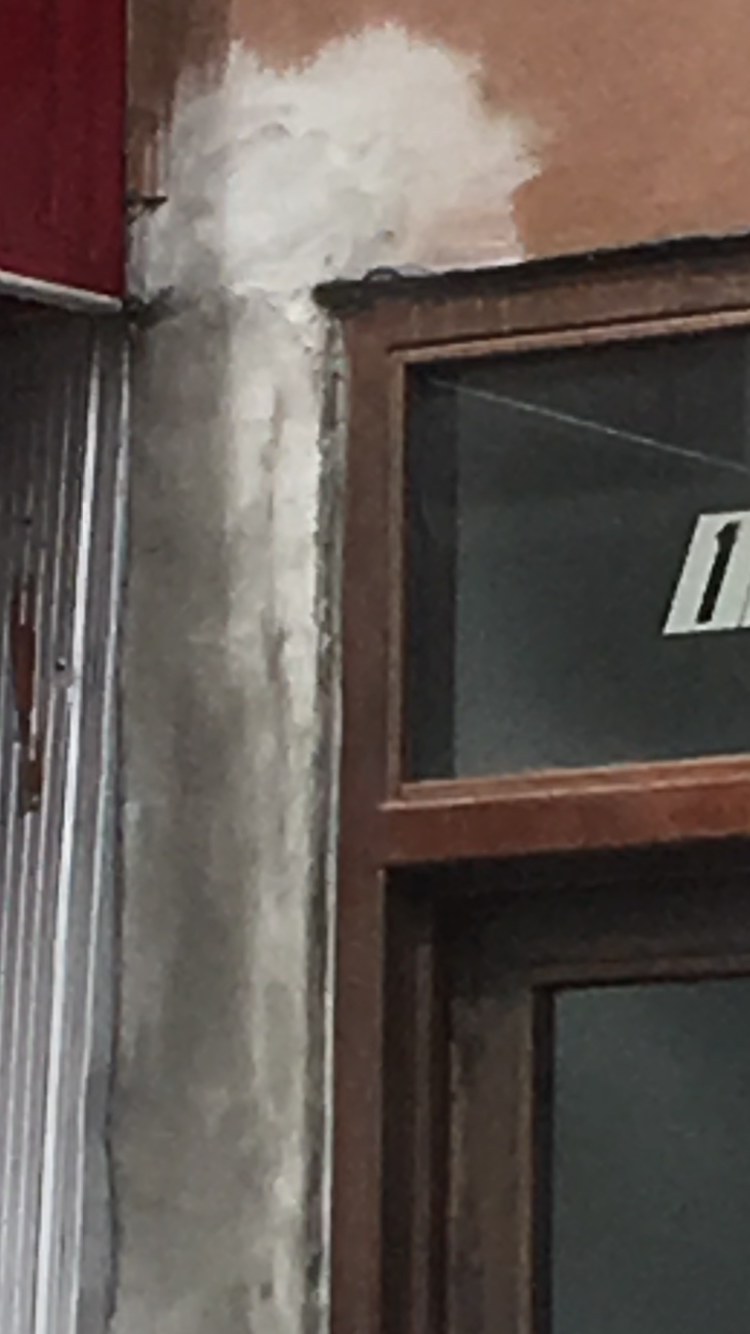 Image 3 Ambiguous
The outline wall of this door was covered in cheap paint during the beginning of its time. That was until it was washed down with constant rain destroying the paint it once had. Some of the paint on the wall was too determined the leave which eventually left the wall with this decayed look to it. Rain still falls on this wall on occasion which leads the rain to become his worst enemy. 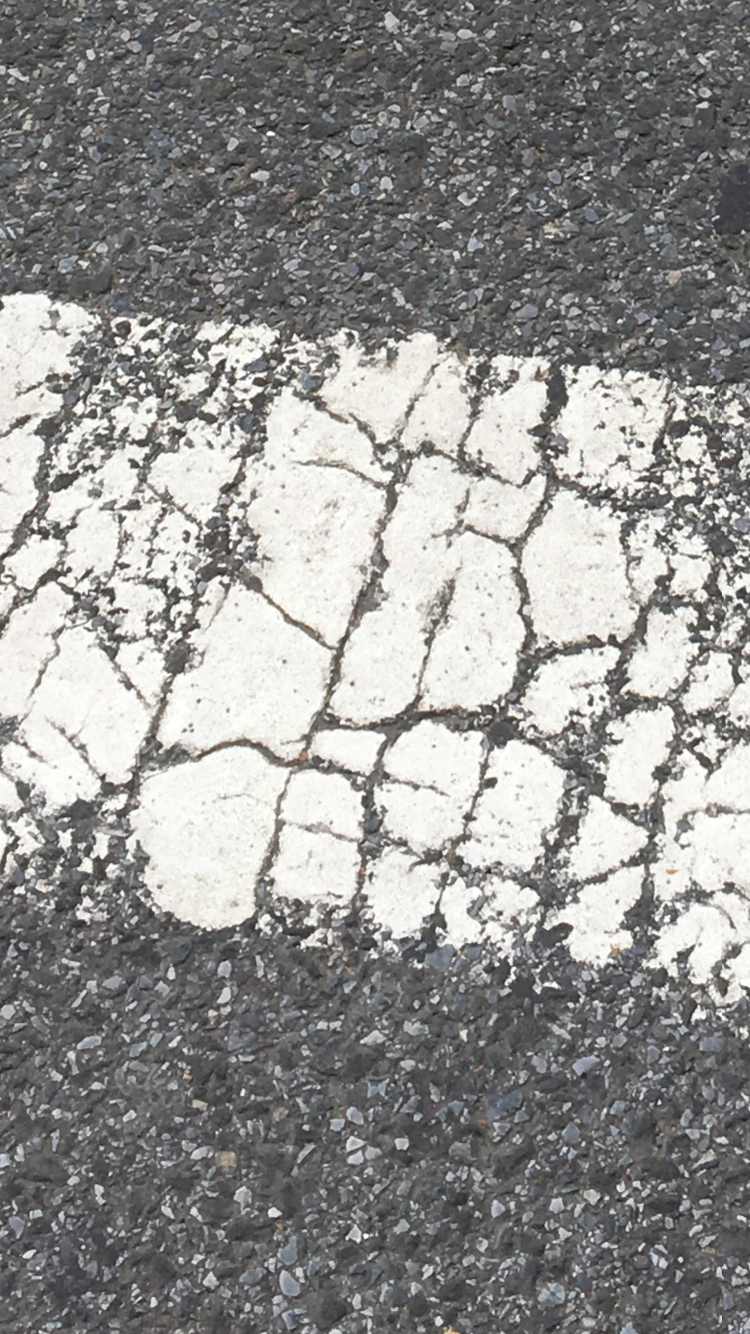 Image 1 Obvious
People and vehicles of many shapes and sizes have walked and drove over this very street. With the rough texture of people’s shoes and car tires, this has destroyed the good paint that was laid upon this street. Though being destroyed, it is still trying its best to hold the paint together. 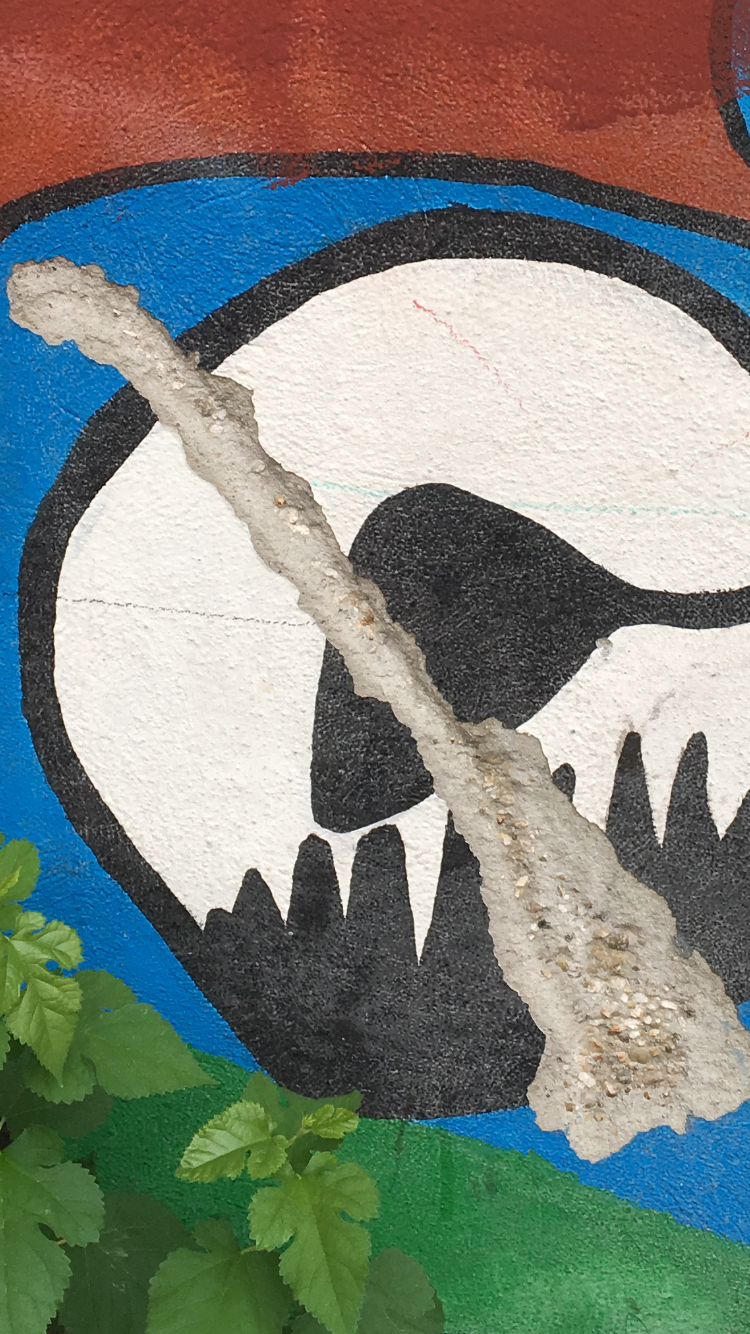 Image 2 Obvious
A young man decided to spray paint this nice representation of nature near a park. Kids eventually found their way to this spray-painted art and not knowing any better, they proceeded to destroy it by scraping it with sticks, rocks, coins and many other materials they could find for fun.  This left a giant scape mark on this spray-painted art. 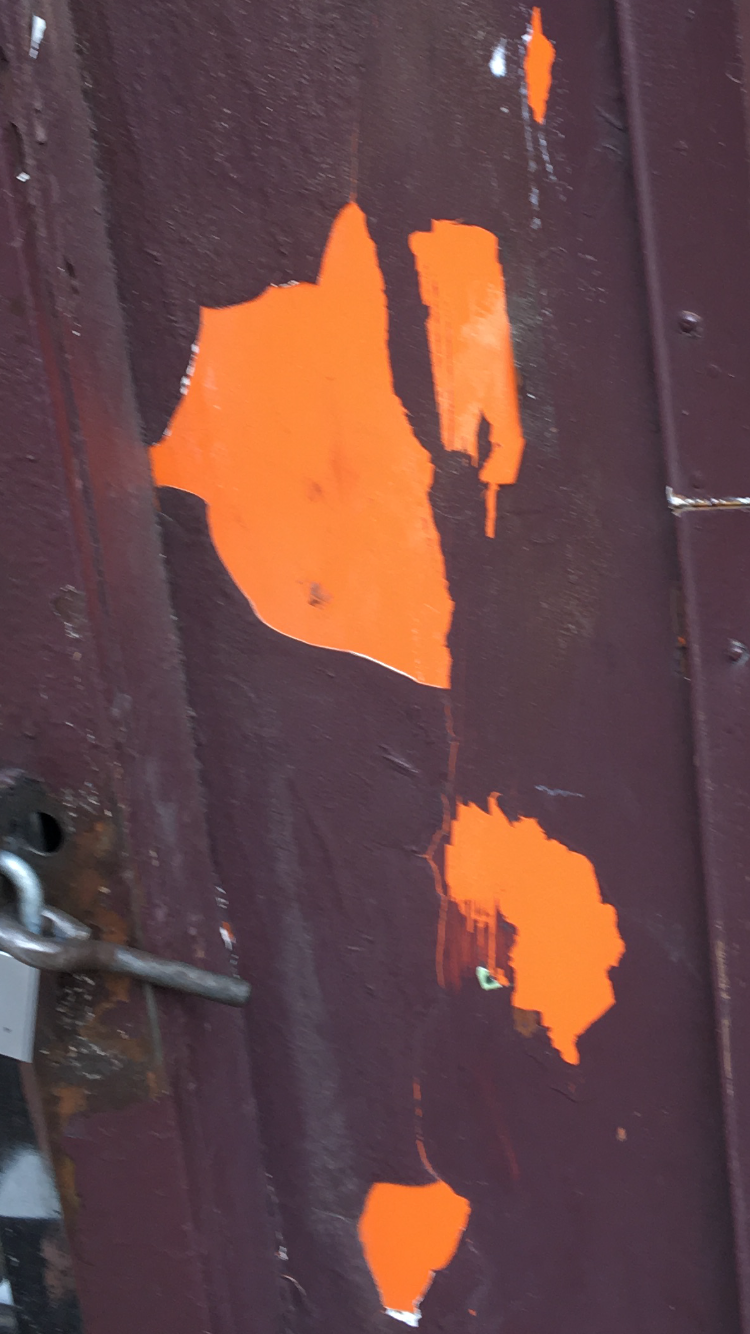 Image 3 Obvious
Cheap paint being destroyed by a passerby is a very common thing in this city. Curious hands by people have been chipping away at this wall for many years which caused some of the paint to fall off. The wall will continue to chip away until needing to be repainted again in the near future. 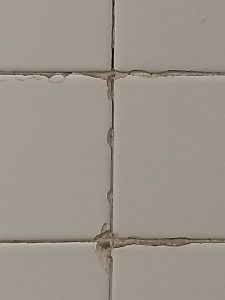 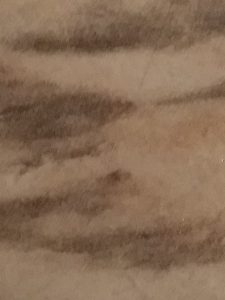 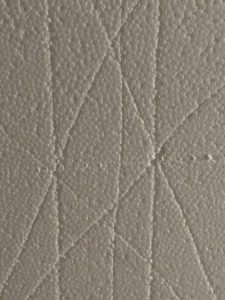 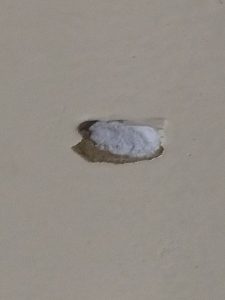 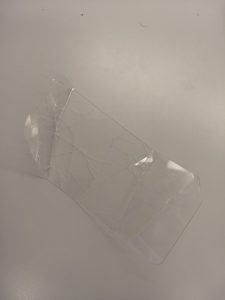 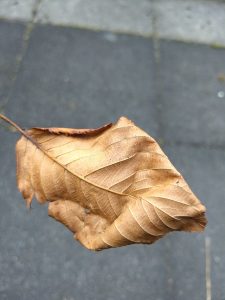 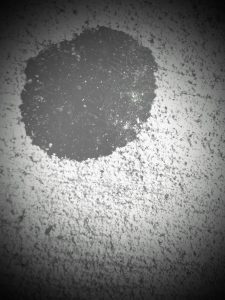 I like to imagine the random black sidewalk spec is there as a result of a faulty building of the sidewalk, lazy paving. I see it at a piece of history from which the sidewalk first originated. It’s VERY intimate with the ground. 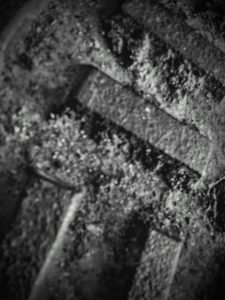 I look at the manhole as a grounded maze. I look at it as a random piece of metal that was inserted to the ground to allow a breathing room, a spacious connection between the underworld and the above ground. It’s relationship with the ground is godlike. It’s a border between two very different worlds. And the maze of the manhole itself is the very journey to navigate to get between the two realms. 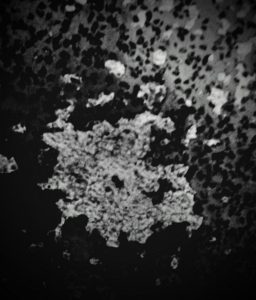 I like to envision the unique splatter shape came from an accident. I see a bicyclist going full speed, then, due to someone else’s incompetence, rhe cyclist had to move, he hits something, and he and hus bicycle fly into the concrete. The way the bicycle hits and scrapes along the concrete and just smacks right into the ground makes an irreversible shape in the concrete that lasts forever. It’s relationship with the ground is imbeded. It’s like a person with patchy skin. 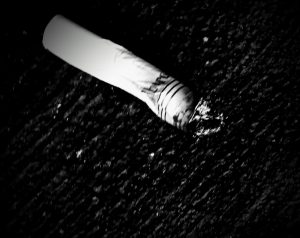 I see the cigarette come from the hand of somebody stressed. From the type of person wjo smokes on his break, but was immediately called back to work before he could finish, says “ah dammit.” With an attitude and flings his unfinished cigarette to the ground with his fingers before pacing back to his workplace with anger, as the cigarette seeped and burned into the ground. 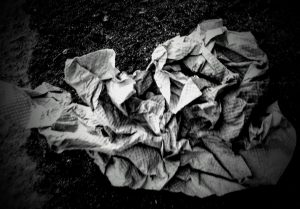 The napkin has a good relationship with the ground, as it adds variety to the ground, the shape the napkin is in and is crumpled tells me that this napkin was lost by somebody who had too many napkins and tossed it aside to be rid of it. 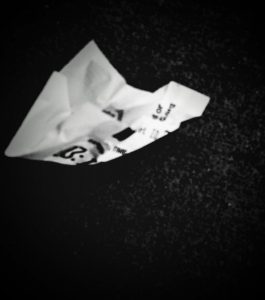 I see the receipt as an object that was lost on purpose. A person who has made a purchase, received a receipt, some pennies, and a few silver coins. As a normal person, he keeps the silvers, discards the pennies to the ground, as well as his receipt. I like to imagine the receipt is not too far from the pennies in this photo. Only the ground will accept the receipt. 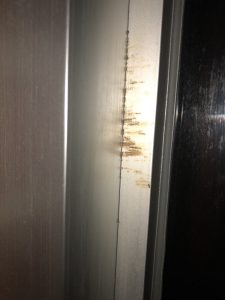 Story/Ambiguous
Angela is running to get her student Id before the office closes,but first she had to print out her schedule at the library and did you know they won’t let you print without an ID .Admist her conundrum an advisor helped her out by printing out her schedule for her .While running back to the first floor to get the office she tripped on her own shoe and jolted torward a vending machine .She didn’t fall into it but her schedule paper fell under the vending machine.Angela didn’t make it to the office by the time she moved the paper stealing machine

Story/Obvious
A piece of scrap paper on the ground ,well at least now it is .Before it should’ve been a essay,or a drawing ,or a scribble of the next big cartoon .But now it’s just paper crumbled on the ground that means someone gave up on it .Yet this photo came to be and it’s helping someone .Maybe not the originator of the crumbled paper cause that tree went to waste ,maybe not the person who had to cut the tree or make the paper either ,definitely not whoever bought the papers .But in the end it helped someone and fulfilled its duty

Story/Obvious
Over 25 years ago ,the first got milk ad was created by Aaron Burr and since then milk has been a staple in the American diet due to the popularity of that ad and brand .This photo represents the end product of decades work of milk ads.It shows the meaning of the slogan “Got Milk” by showing a spilled drink .Thus bringing a customer in to buy by the cultivation of years of advertising with just a sign of spilled milk .

Story/Ambiguous
A snowy mountain runs through a cycle of evaporation ,transpiration,condensation,Precipitation. No matter what and that cycle will never change .Same thing with the Sun ,it’ll always rise in the North and set in the South .But what do you think would happen if the sun were to reverse,or if the cycle mixed itself up .Would a new ecosystem come to light ?Would snow turn black ?would the shadow on the dark side of the mountain disappear ?or would it live on the other side ?

Story/Obvious
Long ago,this school had a teacher who gave his all to his students and was highly respected.They hung a photo of him in the hall and it was a symbol of his dedication to education.Since his work here was done many years had past and with each and every year his story became less important and wasn’t remembered by many students or faculty.So when the photo of the once prestigious teacher fell all that remained was the remnants of the tape that held it up .

Story/Ambiguous
A black spot in the white paint .Was it there before and never fixed ? Clearly wasn’t important enough enough to be changed or painted over.Maybe it got ripped off by tape or just scraped by a unknowing janitor.Could be that the white paint was under the black spot ? and every got painted but this one place ?Does it hold that much significance?Was it hidden by an important poster or photo or plaque? Which came first ,the chicken or the egg? 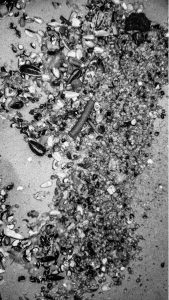 After reviewing the pictures I took, I realized that I mostly took obvious pictures. That’s when I decided to scatter some of my bird food unto their paper. 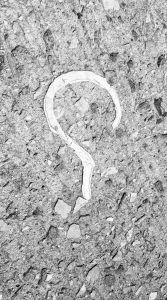 I’d like to think that a scooter ran over this piece of straw paper because of the flattened surface. 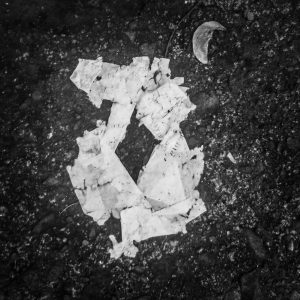 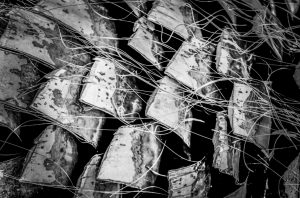 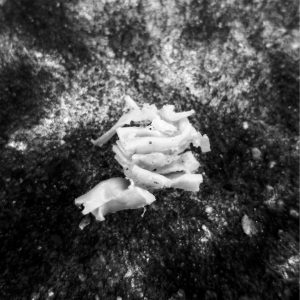 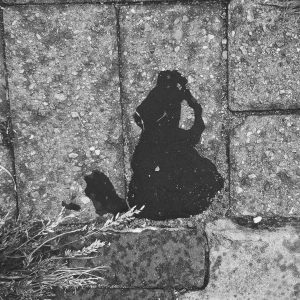