Through Defeat is a humument by Alexander Guerrero that was inspired by Tom Philips’s original artistic rendering of text, A Humument. Guerrero’s humument contains a copy of a page located in Act II, Scene III, page 83 of Lorraine Hansberry’s play A raisin in the Sun. The designing of the humument was done by using two tints of brown, one green, black and two tints of gray colored prismacolor colored pencils along with a black .08 micron pen to make the words stand out from the colored pencils. The humument made out of the text from A raisin in the Sun is a trio of flags upon mountains which brings upon the subject of this humument. Alexander also uses the psychology of color to go along with the meaning of the text to further drive the feeling of despair that defeat brings. Simply trying your best does not always mean you will succeed, and that defeat is simply inevitable.

Guerrero uses Hansberry’s Act II, Scene III from A raisin in the sun to completely switch the context of a major turning point in a character and driving it to the ground by making it grim and essentially driving it’s original meaning to the ground. This is where Guerrero puts to play the psychology of color into play by combining the context of the original text along with the colors and the image that is being presented by this humument. Green can be symbolic of envy, in India the color brown denotes mourning, white represents emptiness, black represents pessimism, and finally gray represents isolation.This goes along well with the image being presented in the humument as it shows a field with a trio of flags that represent defeat upon a battlefield or the mourning of a failed dream.

The decision of creating a humument came from one of Guerrero’s experiences in his journey as a graphic designer with little to no experience, as a young boy who has enjoyed drawing to the college student he has become now, he did initially faced opposition from his parents which quickly shattered his dreams in which he felt all the colors that created this humument, however his parent’s opinion were quickly changed and Guerrero began once more with his dream. A Raisin in the sun was also chosen for this sole reason, Guerrero originally planned to go with a more lighthearted humument that spoke about being prideful of one’s roots and origins, however quickly changed it upon realizing how much more fun it is to completely switch the context of a text by simply choosing a few words. Upon discovering the fun in switching the context and being a “villain” to optimism Guerrero created the humument that is presently being shown right now.

As for the text A raisin in the sun by Lorraine Hansberry was chosen for it’s theme of dreams and whether or not one lets them “dry up like a raisin in the sun”. This text also reflects on Guerrero’s past experiences, as well as his morals and how he himself, nearly let his dreams become just that, a raisin that has dried up in the sun. The piece of text that was chosen takes place around the end of the climax and is a major turning point for a character who nearly throws away the pride, future and among many other things of his family all for the sake of money however this character instead decides to reject the money and continue with their original plans of moving forward. In the end this humument was created from flipping the meaning of the text by adding more despair and defeat into the mix, but just like the text the humument can be flipped over to present another meaning of simply not giving up and following those dreams.

Through Defeat is a humument created by Alexander Guerrero, and is a piece that is inspired by Tom Phillips’s artistic rendering of text. In this humument Alexander uses the negative side of colors in psychology and text to convey the feeling of dread that is most often associated with defeat. 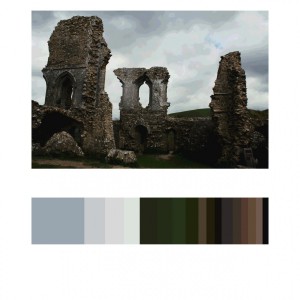 The field trip on Monday was rather fun and incredibly interesting. For me the funnest part of the trip was looking at the zines and images people made, such as the Bush one which is pretty out there. We also learned about letter printing and the way it has evolved, it’s pretty interesting knowing how difficult but more involved printing was a few decades ago. Afterward we visited an art exhibit that featured art from an artist who visited India at one point. The symbolism behind his art I found to be rather difficult to understand but still very unique in the way it makes one think about the world. 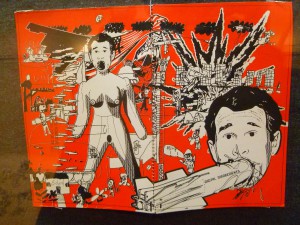 Definition- The act of copying something like a document, book or even a sound.

Where I first encountered this word- I remember encountering this word during the video that was played during English class regarding how mass production and the camera has changed the singular meaning or message of a drawing. When thinking about Reproduction I think about old VHS and the mass production of disney movies

Definition- Something or someone that is real or genuine and that is not fake.

I remember hearing this word again in the video played during English class and how reproduction of images has allowed an ease of access that has created various definitions for images such as The Mona Lisa and how famous authentic images can only be seen in one place. I remember this word by thinking of famous painting that are one of a kind in the sense of the history behind it rather copies of them that are not the real deal.

While I’m rather late to the party when it comes to recording my experiences about the art museum I still remember things about it rather vividly, unfortunately I wasn’t able to take pictures due to the absence of my camera but I will do my best to describe the occasion. The Bric Art museum is located near the Fulton Mall and at the time was holding an art exhibition. Many of the art pieces were really abstract and could signify various things I wasn’t exactly able to deduce what any of the actually meant but they were pretty neat. My favorite out of the bunch would have to be the metal chains that dangled from the ceiling in my eyes it represented someone who feels held back and feels that they can’t escape even though the exit is right under their noses or it could be the other way around and it’s just someone who doesn’t want to exit those chains. We also were shown the studio at the second floor which was home to an exhibition that was rather creepy and not something you would want to be stuck with alone. Another thing that caught my attention was the lessons the Bric art center offers on broadcasting and even allowing one to make their own shows which is pretty neat and allows for newbies to get a start in television. We also came across Professor Spevack’s own exhibition which is an indoor outhouse(or as a make-out booth as some people called it) while I didn’t go in it due to distractions I thought the concept was both interesting and pretty silly in a good way. If I had the chance to go I would definitely plan another visit with friends if possible and the option to be able to exhibit my own art is also pretty neat as well.

Some Before and after Mash-ups, the top two are the ones I used for my official mash-up while the bottom two were my first 12 that were later reviewed and eventually 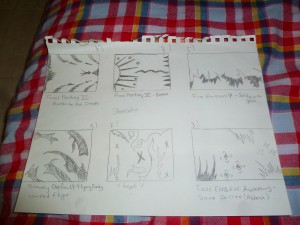 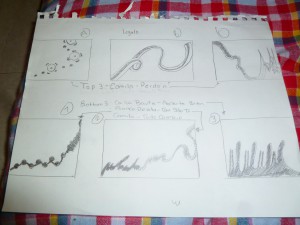 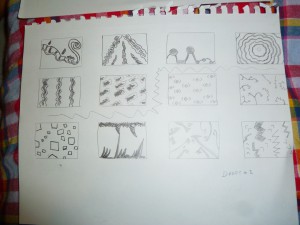 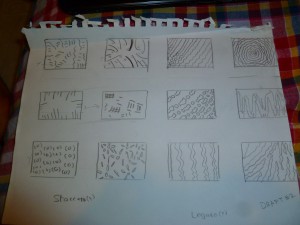 Juxtaposition Definition- The act of placing two things side by side to create a comparison between the two.

Location of the Definition: http://www.merriam-webster.com/dictionary/juxtaposition

I encountered this word when being given the assignment of city limits in class that is due the 20th of October. The way I understand the word Juxtaposition is when I think about the poor and the rich when placing both side by side they contrast each other really well and show off the differences in their lifestyles.

Ambiguous Definition- When something is not defined clearly.

Location of the definition- http://www.merriam-webster.com/dictionary/ambiguous?show=0&t=1413342460

I encountered this word during the first few classes in Professor’s Spevack’s Way’s of Seeing class. When thinking of the word Ambiguous I think of things that aren’t easily defined such as when looking at a drawing or picture whose contrast of black and white are 50/50 and make it hard to distinguish what I’m truly looking at.