tubercular of, relating to, or affected with tuberculosis

Tuberculosis -a highly variable communicable disease of humans and some other vertebrates that is caused by the tubercle bacillus and rarely in the United States by a related mycobacterium, that affects especially the lungs but may spread to other areas, and that is characterized by fever, cough, difficulty in breathing, formation of tubercles, caseation, pleural effusions, and fibrosis

The Shawl by Louise Erdrich

“His father’s chest was broad and, although he already spat the tubercular blood that would write the end of his story, he was still a strong man. It would take him many years to die. In those years, the father would tell the boy, who had forgotten this part entirely, that at first when he talked about the shadows the father thought he’d been visited by manidoog”

The narrator explain that Jackson father had a disease Called Tuberculosis and before he passed away he use to spit blood which was a part of the disease.

adjective
monotonously—used to describe something that is boring because it is always the same.

The Shawl by Louise Erdrich

“‘She became a gray sky stared monotonously at the wall, sometimes wept into her hands for hours at s time”

The narrator shows how the mother became depressed that she was in love with a man who lives else where. she was sad and just stared into the wall that was the same.

Aleut– a member of a people of the Aleutian and Shumagin islands and the western part of Alaska Peninsula.

Definition 2- the language of the Aleuts

What you pawn i will redeem by Sherman Alexie

When I got to the wharf, I ran into three Aleut cousins, who sat on a wooden bench and stared out at the bay and cried.

These Aleuts smelled like salmon, I thought, and they told me they were going to sit on that wooden bench until their boat came back.

The narrator was trying to describe a certain kind of Indian froma part of Alaska, which links to the second sentence when he states these Aleuts smelled like salmon.

A rose for Emily

‘’A few of the ladies had the temerity to call, but were not received, and the only sign of life about the place was the Negro man–a young man then–going in and out with a market basket.’’

The Narrator explain that the women had the heart to call but nothing came from it. The only thing that are was the men with the market basket

The next day he received two more complaints, one from a man who came in diffident deprecation. “We really must do something about it, Judge. I’d be the last one in the world to bother Miss Emily, but we’ve got to do something.”

I attending the workshop on Thursday at 1 pm in the library. During the discuss ways of presenting ourselves in different ways. First thing they asked us to do was to google our names and see what you find. Of course there were millions of Jacqueline Etienne. I didn’t not find myself personally, but the point of us searching our name was to see the information that comes up when someone tries to look you up. So basically you need to have control on what you have out there. For an example if you’re going for a job interview and the interview went well, If the director decided to looking you up and your Facebook profile is public and you have outrageous status like “late for work again or this hang over is killing me”. Some people a lot of drunk picture even though it’s your personal life it doesn’t look good in the company eye.

So creating a E-portfolio will be very beneficial for you in your career and professional life. It’s information on your profile will be positively created by you, which will appear on the internet world. The E-portfolio is a part of OpenLab you can customize with different categories like a regular website that you will have created but it’s free. You can had a pictures,art gallery,job resume or add a link to your resume, you can add a short biographies and your education. In the work shop he showed us example of different E- portfolio depending on the person major/ career. During the workshop I created a E- Portfolio I must say it will be very important to have one this being my last semester and I’ve been sending out resumes for the last month. I feel having a E-Portfolio will be great for my professional career in the future.

Trance
(trans)
Noun
Trance A half conscious state characterized by an ansence of response to external stimuli, typically as induced by hypnosis or entered by a medium

Verb
Pit into a trance

The Shawl By Cynthia Ozone

Rose did not feel hunger; she felt light, not like someone walking but like someone in a faint,in trance, arresting in a fit , who is someone a floating angel, alert and seeing everything, but in the air,not there, not touching the road.
In the shawl they used the word trance as an expression of how rose was feeling weight wise.

Cholra an infectious disease of the small intestine, cause by the bacterium vibrio choler and Characterize by profuse watery diarrhea, vomiting, muscle cramps and severe dehydration and depletion of electrolytes.

The Shawl by Cynthia Ozick
But it was not Rosa’s bleak complexion, dark like Cholera, it was another kind of face altogether, eyes blue as air, smooth feather of hair nearly as yellow as the stars sewn into Rosa’s Coat.

They use the Cholera to describe the color of Rosa 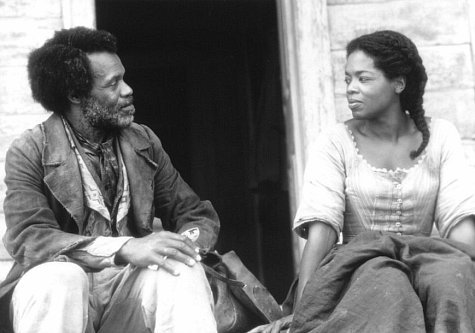 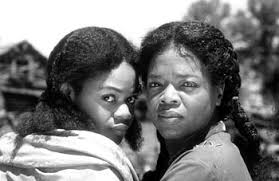 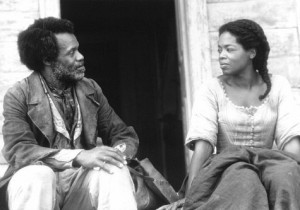 The first picture show the attachment that Denver and Sethe have had all along. I considered this picture very smothering attached by the hip and very fearful mothering. The Second picture was from the beginning of the book when Paul D came back into Sethe life. I consider this picture welcoming from an old friend.
As a part of my pivotal scene the book shows how shyness and unhappiness that was boiled up inside Denver. When Paul D wonder upon Sethe house and came in for something to eat. He then notice that something was wrong in the house he felt there was evil.
As he settle in and having a few short words with Denver answering brief. She broke down how unhappy she is, how she wants to move on, she felt trapped and how the house is haunted, how no one comes to visit. “But Denver was shaking now and sobbing so she could not speak”. The tears she had not Shed for nine years wetting her far too womanly breasts. I can’t no more I can’t no more”(17). This quotation shows how long she been feeling this way and it’s now coming out in painful tears.

In the story Beloved Denver comes off as a shelter person very antisocial, sad, depressed and soft spoken. Throughout the story you watch how Denver character change for the better.

Sethe took two swift steps to the stove, but before she could yank Denver’s collar, the girl leaned forward and began to 9cry.

“What is the matter with you? I never knew you to behave this way.”

“That’s just it. She got no cause to act up with a stranger. Oh baby, what is it? Did something happen?”

But Denver was shaking now and sobbing so she could not speak.

The tears she had not shed for nine years wetting her far too womanly breasts.

“What’s she talking ’bout nobody speaks to you?” asked Paul D.

“Leave off, Sethe. It’s hard for a young girl living in a haunted house. That can’t be easy.”

Interpret: Denver was very sad to the point where she broke down in tears in front of a stranger she doesn’t know. This shows that she is overwhelmed with the way she was forced to live. Sethe lifestyle affects Denver a lot. She felt isolated or held hostage because she’s the only child her mother had left. She wasn’t able to have a regular life as other people her age would.

Analyze: The Author started of the paragraph with: Sethe took two swift steps to the stove, but before she could yank Denver’s collar…..

Denver had a build up of emotion which was let out by her mother action when they were cooking. She expressed how she felt right there and then.

Apply: In the story Beloved, Denver comes off very jealous and shy in the beginning. She dealt with jealously when it comes to Paul D and Sethe. She also dealt with jealously when it came to Beloved and Sethe. Denver played an important role through the book she knew who beloved was before Sethe. When Sethe got sick she looked for work gained a job and cooked for her mother. She was a changed person by the end of the book from the shy girl who won’t say much and was shelter in the house. She learned her way around she became more confident and independent.

Read: review class readings to prepare for the final exam

Write: a quotation sheet for the final exam: this should include the 2 quotations you would use for each of the 3 possible topics you have prepared

Research: elements of fiction that could appear on Part 1 of the final exam. What are some that we have discussed recently?