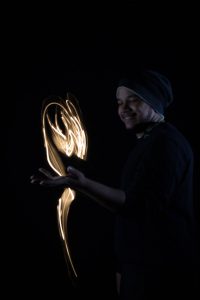 It seems like the subject is holding some sort of fire. By using the light source it creates an an imagery of fire and light. Especially when the subject is very dark the fire looking subject stands out a lot more. However, it’s enough light to see what the subject is doing, in position.

This photo is inspired by the anime name Naruto, we were trying to create a Sharingan one of Naruto’s abilities. One of my team member (Justine Lee) was the one who came up with the Idea and I try to make it come to live by using the shutter speed of 13 seconds, the aperture was f/14 with Iso 100. we had 2 lights one was just a fill and the other was the main light. 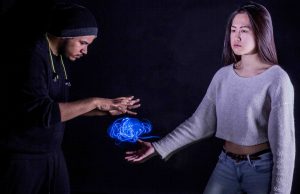 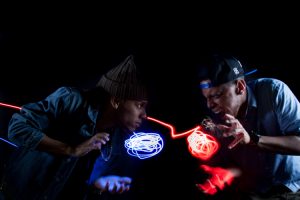 This is a photograph of photography with light. It was taken in the dark, we had a strobe light on the left side to take a photo of the subjects, then we had 8 seconds with the aperture open to take it lights from our phones with light filters. This is an amazing photograph portraying supernatural power

Posted on December 1, 2016 by Christian Davila-Lopez

This was what I would say was theist photo that was taken today. I really like how with the light I was able to create a fire with me. The shutter speed was at 2 sec. and it used the secondary light source. 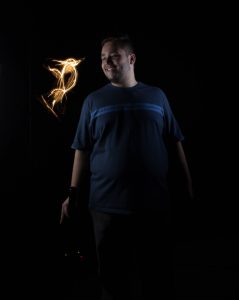 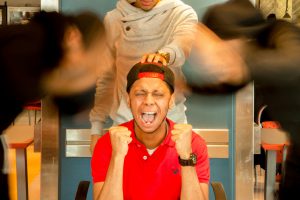 In this photo you can see a mix of motion/blur and still/clear movements happening simultaneously. The photo was set up with a 10 second time frame before the photo was shot automatically, two of the people in my group were constantly moving while the other two were still. What this photo captures is an emotional state of being, whether its hectic, scary, or crazy, and thats what makes the photo interesting. The photo looks as if it were shot purposely but at the same time seems to have captured a decisive moment. This photograph was taken at a shutter speed of 2 and a focal length of 68.0 mm. 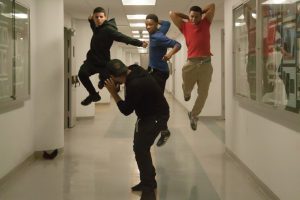 I feel that the frozen motion pose that this photo captures explains everything, the emotion, feeling, and of course the shutter speed. I enjoyed running and then jumping along with the people in my group just to capture this moment, which was what I pictured or hoped that it would look if attempted. This photo portrays an exciting, intense moment as if the three of us who are caught in mid air are attacking the helpless one, Jesus Munoz. Although the lighting wasn’t so great and could have been adjusted with some fixes on either the iso or aperture, I feel the photo still gets the job done when considering the fact that this is what we were aiming for, to be caught at our highest peek when jumping in mid air. The shutter speed in this photo was set at 1/500 and a focal length of 44.0 mm as well as an aperture of ƒ/5.0 and an iso of 3200.

Posted on December 1, 2016 by Geneva Finklea 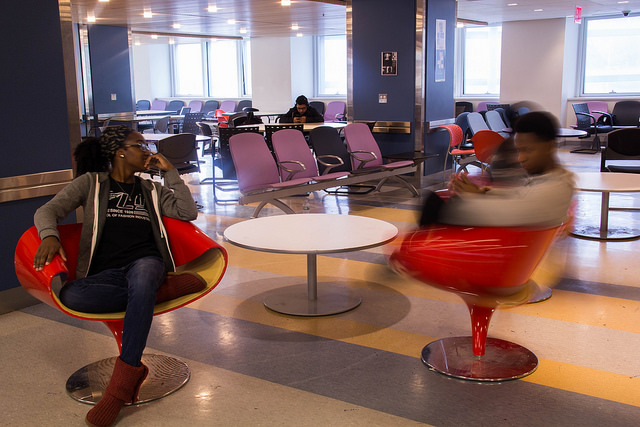 In this photo you have a motion blur of Marc spinning is a chair while I’m in the other chair not moving at all. This is interesting to me because it shows contrast between the two main subjects in the photo, plus I would say that this photo is playful yet calming because of my expression which is contrasting with the fun spinning that Marc is doing. The great amount of saturation in color along with this bright lighting also adds to the feel of the photo, this photo gives off a positive vibe. The Shutter speed is 0.8, the aperture 14.0 and has a focal length of 24.0 mm. 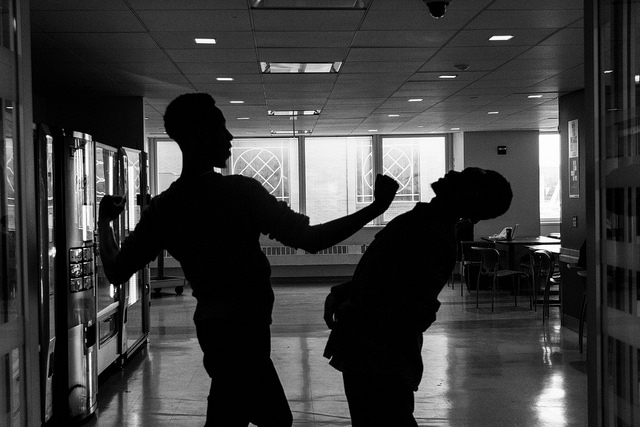 I really enjoy this frozen motion of Marc and Trevor “fighting” because it symbolizes action and excitement to me. The black and white element of this photos is also great because it brings out the silhouettes in the both of them. Also given the fact that the natural light from outside really lights the background. The Shutter speed is 1/500, the aperture 4.5 and has a focal length of 31.0 mm. 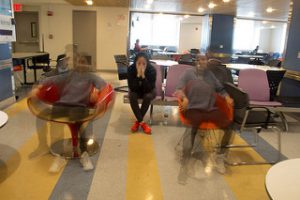 This image captures a lot of movement. This photo was taken in a 10 sec time lapse showing how my group members and I switching seats. This created a smooth transition in this photo. As you can see, it looks as if we are sitting on each others laps, but in actuality we have switched seats.  This image is visually interesting because not only is it capturing the movement, but also the still movement when we first began taking the photo.  This photo was taken at the shutter speed of f/22.0 and focal length of 18.0mm 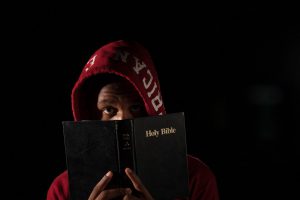 This image portrays a serious mood. With the use of two different lights we were able to create a mysterious feeling portrayed from the photo. What really ties this photo together is the bible, its adds more to composition by covering his face to make it more dark. This makes the photo a solid composition. The dark black background helps to give more focus on the subject rather than how the lighting in the background is being used to pop off of the subject. As a whole, I really loved this photo because of the feeling it gives you just by looking at it. 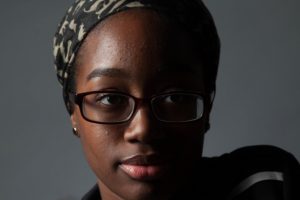 The lighting used from this photo comes from a soft box and a lighting grid. Rather than focusing on her body from the shoulders up, as a group we decided to focus on getting a closer shot to her face.The soft box was put on the right side of her face to create a division of dark and light on her face. We added a fill to make sure her face was not too dark when showing her facial features, but also showing contrast between dark and light.

Posted on November 30, 2016 by Trevor Probherbs

I believe this photo captures motion beautifully. As I was running my classmate took the shot as the photo shows me in motion and a student behind me being still. Another reason why I really like this photo is because while looking at it it makes me feel like i’m the comic book hero The Flash. 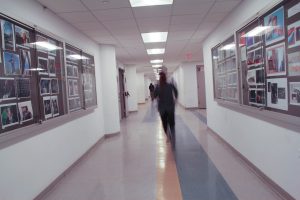