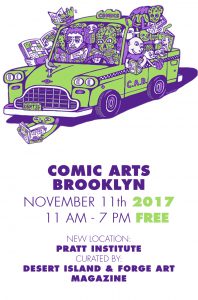 Looking for a networking event that was in my price range– FREE, and during a time I didn’t have class was a tad bit difficult, if I must say. I found one that was okay, but ended up going to one that I was told about for free, so I had to take the opportunity. At first, the networking event I was going to was called something along the lines of “From The Deep” on Sunday November 12, 2017. The one I ended up going to was called “Comic Arts Brooklyn” held on Saturday November 11, 2017 from 11 a.m. to 7 p.m. at Pratt Institute in Brooklyn. It was an all day thing happening at different sections of the school. I was excited, 1. Because it was free and 2. I got the chance to see some of other artists creations.

On top of it being negative one thousand degrees outside, I was just happy to be in doors. When I got there, There were tables, upon tables, upon tables of artists, both from the school and outside of Pratt. It was a colorful and very eccentric looking atmosphere. There were people selling magazines, cover art or music, posters, stickers, pins, cards, bags, and things of that sort. Anything that you could think of where artwork would possibly be put on it, they had it. I walked around, watching everyone and have their conversations about life and art and work ethics when it comes to projects and illustrations for a little. I walked to the far end and realized I knew someone. I met the guy who draws for the comic book “Over The Garden Wall”, Jim Campbell!! I shook his hand and introduced myself, complimenting him on his artwork, how I watched the show Over The Garden Wall and how I love his style a lot. He smiled and explained how he worked with Patrick McHale and after a few minutes of conversation I was given a little piece of paper with his information on it (better than no business card). I gave him mine and he complimented my illustration on the back/front of it. I came with the intention of not buying anything,  but ended up buying a bag of cute little buttons with the faces of characters from his new comic “At The Shore”. 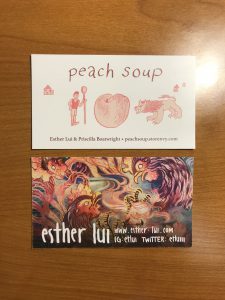 On to the next! I just so happened to also see Gideon Kendall, the background illustrator of a show I used to watch as a little kid called “Kids Next Door”. Last semester, my illustration 3 professor introduced us to him as a good friend of his and allowed us to get the opportunity to look at some of the works that gideon did and is in the the process of doing. I’m glad to say that the world of illustrators is tight knit in the sense that almost everyone knows each other. I shook his hand and caught up on what I had been doing. He unfortunate ran out business cards, so I was not able to get one to keep for myself. I said my goodbyes, wished him well and moved on. Later into the night, I saw many other different tables like an illustration club table selling what their club made for the semester so far. There were zines with club illustrations, posters, button, pencils, stickers, etc. I’m broke so I bought a sticker for a dollar. Before my night at Pratt was coming to an end, I saw another table that had very beautiful artwork on it. The style was a mix between Steven Universe, Studio Ghibli and Japanese style inking and paintings. Her name was Esther Lui. I had to stop and talk to her about her work and asked questions about how she crafts. She let me in on her little secret (if I told you what it was, it wouldn’t be a secret, now would it?), and gave me her business cards- Three of them! They were all different in their own way, but had the same style, bending the rules of art ever so slightly. Before I left, I bought a mini comic and gave her my business card, which for some reason made her really excited, and wished her a good night. 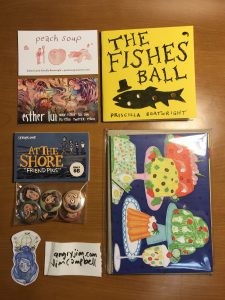 Things that I bought at CAB

I love going to groups where people can put out their art for the world to see. It lets me know that I am where I need to be to keep moving forward. I am happy that I was given the chance to go and be a part of that community or the night. I hope I can go to another one very soon!