On Friday February 6, 2015, I got the opportunity to venture to the Brooklyn Historical Society, a museum holding some hidden information about Brooklyn, from the birth to now. When you enter the building, it seems like one is walking into the past. The building has its own authentic look to it, with its dark, almost burnt brown, walls and very tall ceilings. At the desk in front, I was given maps, descriptions of each destination and a fold-able, cute little button with the museum logo centered in red on it. 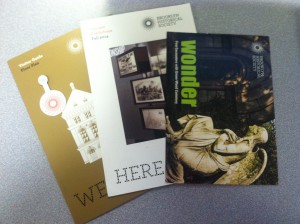 I was too excited to read where each place was and was in need of wandering and getting lost, so I strolled down a little flight of steps to read about the makings of communities in Brooklyn. They had artifacts and contraptions where you would pull on the cords attached to floating boxes to learn more about each section. I mostly, to be honest, had a lot of fun just pulling the cords trying to figure out how exactly I changed the pictures and information on the projectors in front of each box. After reliving the moment of simple bliss, I walked to the elevator, which was suspiciously tucked away, far away from the rest of he exhibits. I chose to go the third floor first and then amble my way downward. The first section I made it to was called “Brooklyn Remembered: The Watercolors of James Ryder Van Brunt”, by- you guessed it! James Ryder Van Brunt, born in 1820 as a descendant of early Dutch settlers. 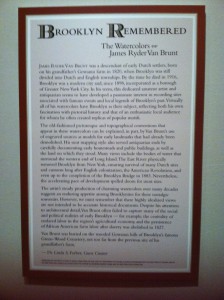 The piece that caught my eye was called “Johnson Residence and Remsen House”. 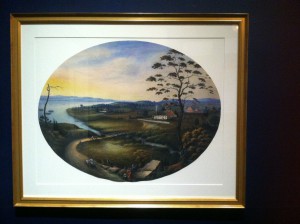 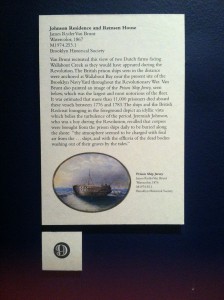 I fell in love with this painting because of the romantic mixture of cool to warm colors in the sky, and the depth of the road leading to and from the quaint and homely house in the background. After attentively staring at each and every fabulously crafted picture, I trailed out into the hallway where the old, yet soft and inviting smell of something sweet lingered in the air. Up against the wall was an average sized visual presentation of the sugar company, Domino. I had no idea, nor did I ever think about where Domino’s manufacturing  began. I was intrigued to know how their sugar was made. While finding out, I took a clever picture of a hands on piece of the display, showing two pictures of the same man “Taking Mold of Crystal Domino Sugar out of Centrifugal Machine” 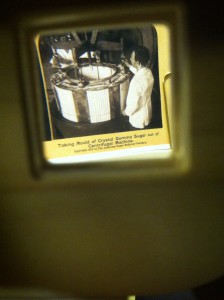 After marinating in the sweet smell of the past, I was about to go down the steps to continue my journey, but then I was startled by this… this huge head of a woman. From the side it was A OK… 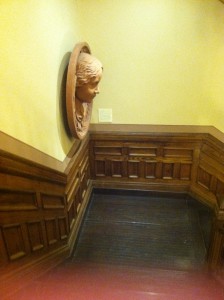 But as I got closer, down the creaking steps that sounded like I would fall right through them with the wrong movement, I realized that I was more than startled, I was actually quite intimidated by the fact that her face was carved and very large. It was about half the size of my body. And to make matters worse, her eyes were carved in instead of molded on. I had a friend of mine stand next to her creepy hanging bust and couldn’t help but laugh. 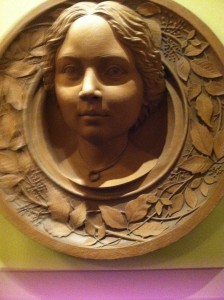 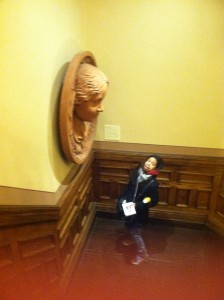 I ran back upstairs, realizing that I missed an exhibit called “We The People: The Citizens of NYCHA in Photos+ Words”. 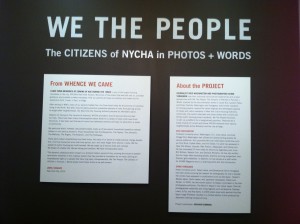 This exhibition was my favorite. I was in love with the way Rico Washington and Shino Yanagawa interviewed and captured each and every moment of the sentimental and reminiscent encounter of extraordinary individuals of New York City’s Housing Authority community. I first read all of the interview of an 111- year old resident living in the Vandalia Houses named Mrs. Susie Mushatt Jones, who was also born and raised in Tuskegee, the community of African Americans in closest relation to their ancestors. 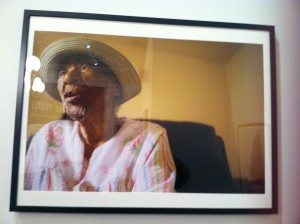 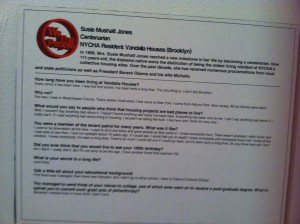 It was beautiful to me, the way Mrs. Susie Mushatt Jones spoke about how she lived in Brooklyn and where she used to live, while also expressing her feelings of then and now. I trailed my eyes down the wall of individuals that used to and or still live in the NYCHA community and I began to realize that I knew some of them. They were artists, activists, poets, teachers, and yet also people that I grew up knowing and being inspired by in both my love and passion for art and music. People like Yasiin Bay, also known as Mos Def, Afrika Bambaataa were the people that I listened to as a little girl up until now. 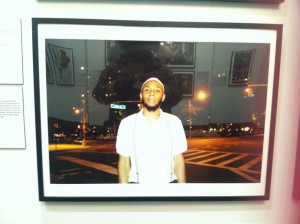 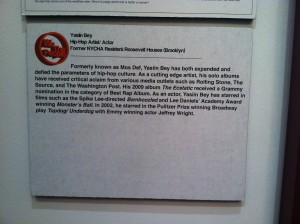 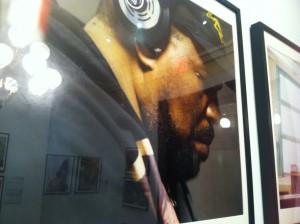 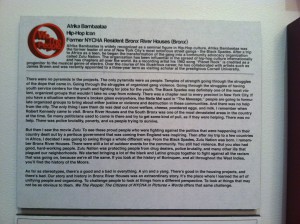 I think I stayed in there the longest. Moving on, I went downstairs– past the almost animated bust to a room of oil paintings of what Brooklyn looked like during the 19th century called “Chronicling Brooklyn’s Landscapes”. 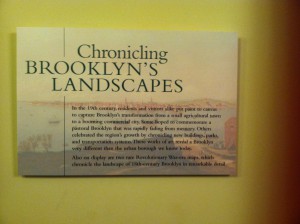 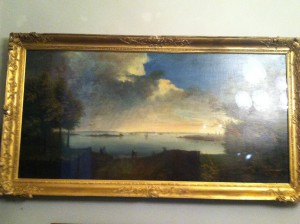 I couldn’t help but be in awe at the size of each and every painting on the wall. I was first drawn to this painting of what seemed to be a sunset by the water or the morning after rain. It was spectacular. In the surrounding foreground of the trees and shore, the sky was dark in one section, filled with grays, blue and green representing the clouds, while the behind the clouds blue skies almost popped out of the dark, to me symbolizing a new day. The bay below it was calm and tranquil, with a gorgeous yellow, pink and white horizon. To finish it off, it was encased in an embroidered golden frame, whose sides were crumbling but in a way added some aging grace to it. After looking at the other paintings, I realized that one of them showed a building that is still there and I often find myself walking past it from time to time. 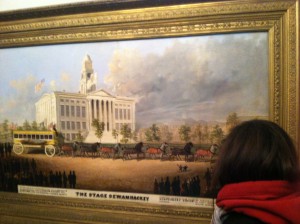 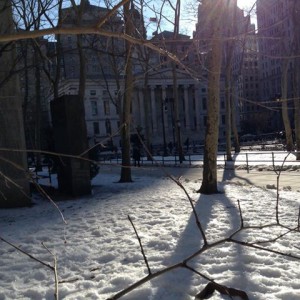 I felt a little triumphant when I got to look at a before and after picture of something that still stands. It was little difficult to take a picture of something surrounded by large buildings, but one might say that it was successful. After leaving old Brooklyn, I took the elevator to the LL ground where I could find photographs of the Green-Wood Cemetary, taken by some of City Tech’s featured students. They were bright, alluring, natural and also symbolic in some cases. In each picture, students captured a part of life seen in another light. 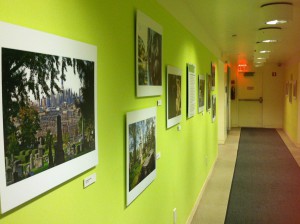 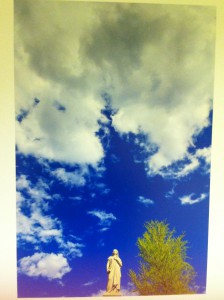 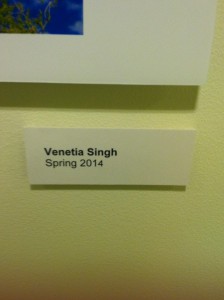 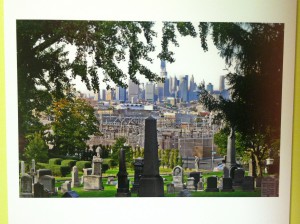 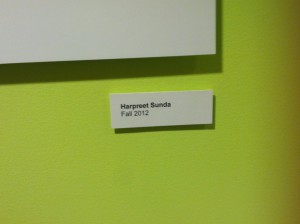 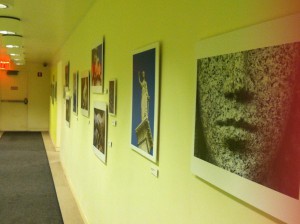 The fact that the wall was lime green supported the pictures, representing life and also death. It was hard to determine which out of some odd 20 pictures were the most captivating. On my way out I ended up in the auditorium where the soft sound of jazz played from the speakers in the wall. I was there for another hour listening to the music. I don’t really know what the best part f my museum experience was, but I left with an open mind for works of art and the life and history of Brooklyn. 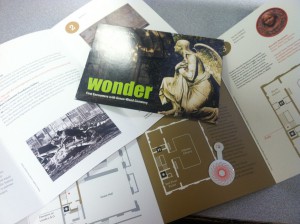