So for this project, the mission was to make a redesigned beverage illustration for, you guessed it, a beverage. We had a lot of time to think about this. I thought it was A OK to ask my professor if I could do something different and do a beverage that I had seen from a movie or a game. Mind you, there is NO PHYSICAL beverage that I could just get up and go buy. Brilliant me, right? I was broadening my search of drinks I had seen and ended up choosing a tea from a game I used to play when I was little. The game you ask?

Professor Layton and the Diabolical Box

Professor Layton and the Diabolical Box.

This game is part of a whole series of games, each one more exciting than the last one. I have the pleasure of still owning 2 out of the 7 that were made…. I should probably get back to playing them. They were so good, they made me cry.

Let me not get a head of myself here. So for the process, I chose my beverage.

In the game, Professor Layton and his apprentice, Luke, set off on a long adventure to find the truth behind a box that was said to “bring death to anyone who opened it”. On this journey, you solve different and very challenging puzzles and get the option to do the mini games that are tucked away in Professor Layton’s trunk.

One of the mini games is called “Tea Set”.

In Tea Set, you get to make various types of tea recipes from the different ingredients you get from solving a few of the puzzles throughout the game, and give them to anyone in the towns that you happen to be in that need a remedy for their illness. 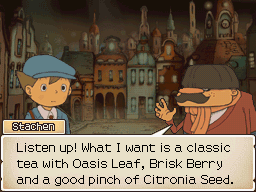 Some people get lucky enough to make all 12 teas. Me, on the other hand? THREE.

After that research, I chose my tea to design; Root Remedy. The description for it states,”Refined in flavor, this tea warms the body and improves circulation. Drink it at the start of a cold.” From there, I started thinking about formulas and concoctions and medicine. I started making a vocabulary list of the words that I thought about when thinking of “root” and “remedy”. Words like “science” “potions” “lab” and “experiment” came to mind. From that, I made this draft:

This was just the first of many that I thought about when all of those words were put together. I decided I go with it. Moving right along, I started making one… two thumbnails… 3… 4… 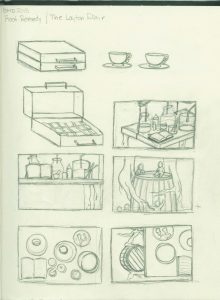 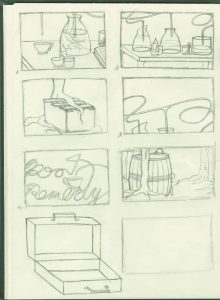 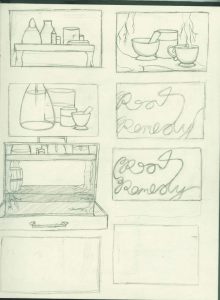 17 thumbnails of the rooted lab table in different perspectives with different arrangements of beakers, bottles, books and other things of that sort on each of the different views of the illustration. I drew out what the beverage package would look like if it were to manifest into a physical thing. I took a turn with the multiple lab table thumbnails and tried some illustrated writing. Instead of the lab table, I just wrote out “Root Remedy” in the form of very curvy tubes that made some form of script. After trying that out first hand, I had the idea of putting the tube script on the outside of this “pretend” beverage package and put the illustration on the inside so that when the customer opens the box, they would be welcomed to the drawing on the interior lid. 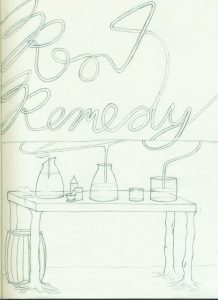 After that, I had to draw out the whole illustration as the drawing I would then make very little altercations on but wasn’t all that happy with the so called close to final piece, so I went back to the drawing board and searched and referenced like crazy.

I managed to create tiny creatures in the process of drawing out everything else and then decided to cultivate the actual look of the tiny mythical things walking around. 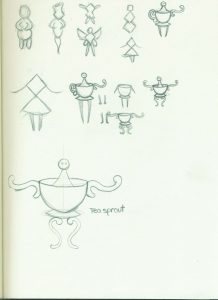 I call them “Tea Sprouts”.

Almost there. Time to incorporate! 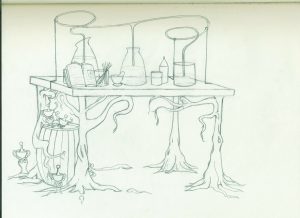 With a little help and critiquing from my professor, I managed to add more to the final piece before, along with adding more to the tea cup and tubed line work. 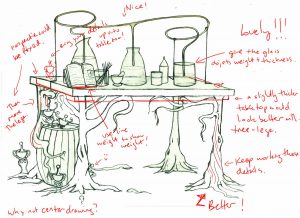 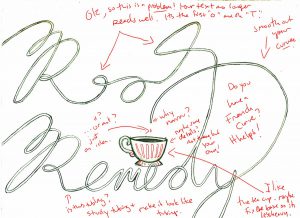 I had to practice some value sketches. I was a little uncertain of what I wanted to be highlighted, so I made created three different valued pieces. 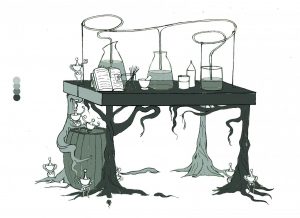 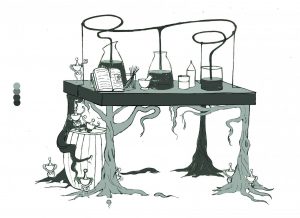 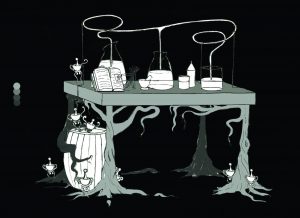 With the chosen values, I made my final piece. Root Remedy was long and tedious, but SO worth it.