All Aaron Swartz wanted to do was spread knowledge and for that he was tried at court resulting in him commuting suicide. He didn’t have any bad intentions with the information he put out he was generally trying to help others out. Sometimes we come across websites that require us to be members for which we have to pay to be. So why not have access to credited and reliable information when it can really help us? Although I do have to add he should’ve been a little more cautious about the way he used government funded information. Copyrighting from the government already sounds like something that can get you in a plethora of trouble. But I do believe that his idea of spreading information was not wrong.

In this article we read about plagiarism and some of the serious results of it. In reality plagiarism is to basically steal someone else’s idea and call it your own. It’s similar to copyrighting but differs where copyright requires permission and one can’t really request permission to steal someone else’s work. Sometimes we read something somewhere of interest and it sticks to us. unintentionally the words that we read can be used again without realizing that they’re actually not your own. Plaigiarism can actually result in expulsion from schools and legal actions can be taken. It wouldn’t be right if someone works so hard to put their thoughts together and another person who is too lazy to think, thinks they can use someone else’s ideas as their own.

So how does one really know if they’re breaking the law by copyrighting? When do we know if we are copyrighting, The video “A Fair(y) Use Take” assigned to watch suggests that the law of copy writing is in a way extortion. Even if we use an idea that is copyrighted it is against the law and we would need permission to use that idea. From the video “Laws that Choke Creativity“, Lessig suggests that there is a fine line between piracy and copyrighting. When can we actually use material without asking for permission? When showing a video to the class, the source is usually YouTube, do teachers really need to ask YouTube for permission each time they’d like to show their class something? The Code of Best Practices in Fair Use for Media Literacy Education help distinguish when it is reasonable to display others work by not taking credit and also when it is considered piracy. 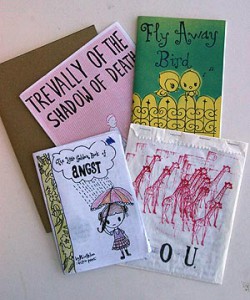 Media has the ability to spread a message globally at an incredible speed. Even in outer space a message is sent to communicate knowledge of exsistence. With this acceleration of delivering media comes a high price. The cost not only has a high monetary expense,  but also a cost of media control. The fact is that media is dominated by giant corporations and drown out the voice of people with less finances. The scale is tilted giving small communities or individuals less voice in spreading new ideas. This has caused underground zine readings to act as an output for groups or people with opinions. This alternative media has allowed new thoughts to be spread without being edited. Small publications have been published for many years, eventually leading to being called zines. Self published readings carry personal ideas, rebelling against mainstream media. Giving people power to speaking their voice.

Other types of alternative media?
Will zines ever go commercial?
How important is the word zine?Can zine communities be compared to earlier stages of information being guarded like gate keepers?
How reliable is a zine?How important is freedom of information?
Would you make and read zines?
Are we living in the “reel” world or the “real” world?

It’s actually pretty interesting knowing something you’ve created, or written can be published as if it were a newspaper just for the sake of your own interest. A zine can be printed as anything from pictures you’ve put together into a collage, to something you’ve hand written. I feel as though zine’s are/were today’s web blogs or internet zines. Websites such as Tumblr, and Blogspot are a zine in some sense but via the web. Blogs today allow the creator to post a vast number of things of their interest. Much like a zine blogs are also non-profit. As a usual web-surfer I’ve come across many of these “internet zines” that include things such as daily outfit posts, or recipes that people have created just for their own enjoyment and for the entertainment of their viewers much like zine creators!

As the years go on technology is becoming more and more a necessity and an obsession. It’s kind of scary how a single device that fits in the palm of your hand can carry basically your whole life. From your passwords, to personal bank account information. Since most applications run through a certain domain; apple runs through iCloud where as Samsung runs on Android app world, it can give one a feeling of discomfort knowing that our accounts are on these and anything we download is basically through this meaning any information we store will also be on these as well.Each year some new means of technology comes out and we spend our money on it not really understanding what information we are actually entrusting to this device!