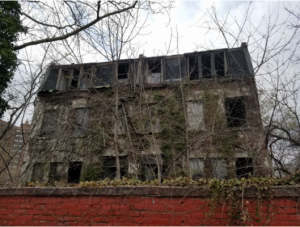 The Brooklyn Navy Yard Industrial Park was first established by President John Adams in 1801. President Adams wanted a Navy that would be able to protect American citizens during a time when the country was seen as a threat to many nations. The Brooklyn Navy Yard was one of the first five naval shipyards to be established. The navy yard is of great historical value due to the generations of people that labored in it. It was used by the Native Americans, as well as the American Revolution where the waterfront site was used in order to build merchant vessels.Today, it is a place for private manufacturing and green businesses in New York. The park takes up approximately 4 million square feet of space.

The history of the Navy Yard can be compared to the gothic novel, A Rose for Emily because it is a breakaway from the olden to a more modern society. Although the navy yard was built to protect the citizens of America over one hundred years ago, we are still benefiting from the park but in a different way. In the Rose for Emily, the setting changes from an agricultural society to a more industrialized society by the time Emily dies. “When the next generation, with its more modern ideas, became mayors and aldermen, this arrangement created some little dissatisfaction.” This quote shows the evolution of an agricultural society to a industrial society that is causing many changes that were unpleasant to some people. As time has passed, the Brooklyn Navy Yard has also changed from being one of the nation’s former leading naval fleets to becoming more of an asset to individuals involved in green businesses. It still has an essential role in our community, but no longer for military purposes. In 2014, the building was listed on the National Register of Historic places as a historic district. This reminded us of the time Emily finally passed away.  “The men through a sort of respectful affection for a fallen monument.” This quote shows the significance of Emily’s home to the people in her community. Her house had so much speculation surrounding it. Emily represented the remnants of a high class society breaking away to a modern way of life which would be influenced by different factors. Although we no longer need the Navy Yard for defending American citizens in terms of fighting wars, green businesses still help keep Americans productive. 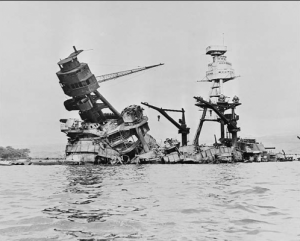 History of the Navy Yard

The Brooklyn Navy Yard was built in 1807 by President John Adams authorization nearing the end of his presidency. The Navy Yard has a rich history, but we are going to recall on the years after the battleship era in 1889. In 1941 during World War 2, the Navy Yard first begin its dark history. The USS Arizona was launched and protected the yard until a Japanese plane ignited the ammunition and sank the ship, killing 1,177 men. Years later, the death scythe struck again in 1960, causing the USS Constellation Disaster, an incident that was caused by a forklift hitting a fuel tank and igniting the navy ship, killing 50 lives and injuring a little over 320. Six years later, the Navy Yard was closed to be reopened in 1987 and re-purposed to become an industrial park. The next and final remodel to the Navy Yard was in 2004. The U.S government expanded the yard twice, creating the largest facility in the United States today. As of 2016, the yard has added many new modern buildings and is home to the first green industrial building. Throughout all those years and remodeling, the one aspect that didn’t change are the apartment buildings located on the east side of the yard. The buildings have been there for years . Through all the history of the Navy Yard, these buildings were never mentioned. Maybe the government never needed the area or maybe there is more than meets the eye. The only thing we know for sure is that these buildings have been through a battle that history never recorded. 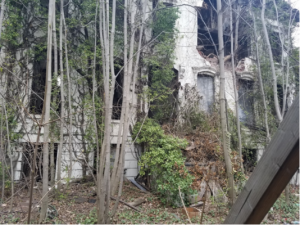 A tree branch has grown into one of the rooms of the house, thanks to its missing wall.

In Relation to the Gothic

The term ‘uncanny’ was first coined by the famous psychoanalyst, Sigmund Freud. Freud defines the uncanny as “that class of frightening which leads back to something long known to us, once very familiar.” Experiencing something foreign yet familiar is something almost all of us go through each day without even realizing it, which could signify subconscious fears when inspected closely.

The Brooklyn Navy Yard contains many different iconic structures which highlight a specific time period in the borough’s history. While some of it has modernized, many old structures are still standing. They feature several aspects of gothic uncanniness which invoke sort of an unconscious fear that we cannot realize until we actually try to interact with these structures.

A good example of this is the fact that all of the structures are gated off to the population, which are plastered with signs that say ‘NO TRESPASSING’ or ‘DO NOT ENTER’, which could imply menacing behind those gates. 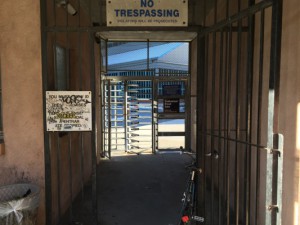 Turnstile with a ‘No Trespassing’ sign above it, threatening prosecution to violators.

However, these signs are just icing on the cake, as the fences and gates around the structures are uninviting themselves. They are pointed on top and are a dark black color, plastered with signs of death. Should one decide to look past these, they will discover more of the uncanny in the actual structures themselves. Behind one of the fences are decrepit colonial-style buildings, reminiscent of an older time where life was harder to live, and one had to worry about death at an increased rate versus how often we worry about it today. 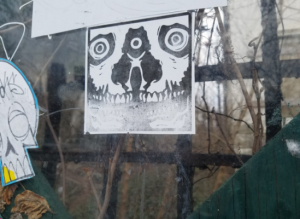 A fence which barricades the building with a reminder of death upon trespassers.

In addition, these buildings are dilapidated and pose the risk of destruction at its own peril at any time, which should be a warning to any who consider entering. 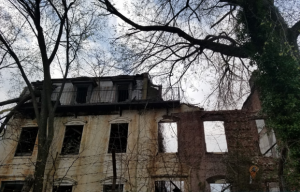 A building missing its roof, walls, and windows. 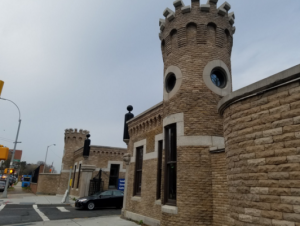 A Castle entrance to the remainder of the area. 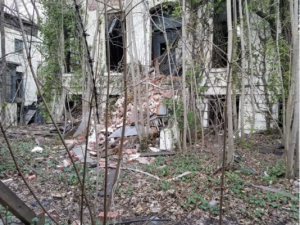 A blocked entrance to this dilapidated building, forewarning trespassers of the impending danger.