In our everyday busy life we tend to go from point A to point B. Many of us don’t take the time to see whats around us or the history behind certain places. One of many places in New York that I consider to be gothic is Washington Square Park. 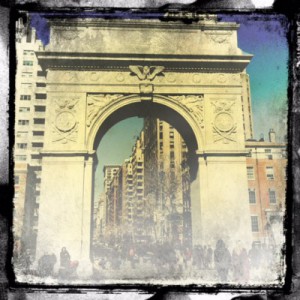 The park may seem ordinary with benches and beautiful trees to the eye but once you find out whats actually there your whole mind concept shifts. The park has a rich history of paranormal events. The theoretical term to describe this place is “The Uncanny”. According to Freud’s essay “The Uncanny”, it states that “…we can find out what meaning has come to be attached to the word ‘uncanny’ in the course of its history; or we can collect all those properties of persons, things, sense-impressions, experiences and situations…”. This clearly states that we can find a place to be very much “uncanny” due to its past events.

Freud also states, “…that an uncanny effect is often and easily produced when the distinction between imagination and reality is effaced, as when something that we have hitherto regarded as imaginary appears before us in reality, or when a symbol takes over the full functions of the thing it symbolizes…”. From this we can imagine our self’s seeing a spirit or whatever, because our imagination and fears mess with our mind and it over takes it. We start playing tricks and we can start believing that there is something paranormal there. Freud also mentions that, “…Many people experience the feeling in the highest degree in relation to death and dead bodies, to the return of the dead, and to spirits and ghosts…” In other words thinking about tales that have ghosts and spirits in them would certainly give a person shivers and goosebumps.

The haunted Washington Square park is located in Greenwich Village on West 4th street. Centuries ago before the park was even established a stream flowed throughout the ground giving fresh water to the Indian Lenape Tribe. Many report that the park was a burial ground for the Indians. Years later after the Revolutionary War the parks ground was used as a potter’s field. Because, an outburst of yellow fever epidemic occurred the park became a burial ground for over 20,000 bodies. 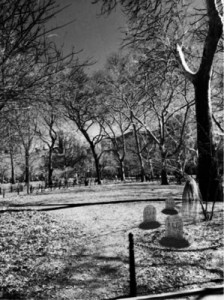 One of the many structures the park has is a beautiful fountain. Now lets for a second just sit down by it, close your eyes and imagine gallows for execution. This is the exact place where many criminals were being executed and buried underneath your feet. 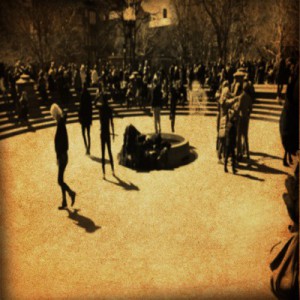 Where Gallows once Stood

The scenery of the park is very green filled with trees, bushes and grass land. In relation to some of the British novels we have read such as “Dracula” by Bram Stoker we can say that it’s sort of similar in a sense that its “woods” like. In the book the scenery is explained as: “pine woods that seemed in the darkness to be closing down upon us, great masses of greyness(pg6)”. If you go to the park at night you may surely feel terrified and experience grayness. The scenery can also turn out to be “… dark, rolling clouds overhead, and in the air the heavy, oppressive sense of thunder(p9)”, just like in Bram Stoker’s book “Dracula”.

Upon the parks brutal history, there have been many reporting’s where people have witnessed paranormal occurrences. Upon my research I have come across blogs and posts because some people have said they have felt a cold breeze run through their body on a hot summer day. Some even said they have seen people walking around dressed up in 18th century outfits and then just disappear. The park is also famous for its particular tree which is knows as “Hangman’s Elm” It is located in the Northwest corner of the park. Legend has it that a woman named Rose Butler was hanged from this tree for committing a treacherous act where she burned down a house she worked in. Some people have reported that they have seen a shadow swinging from the tree. 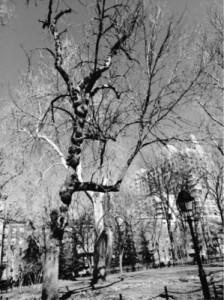 When I went to visit the park I have not experienced anything unusual or paranormal. However, when I was sting on a bench and just thinking to my self what lies underneath my feet it really creep me out. There are thousandths of corpses underneath the ground. Just the thought gives me jitters. There is no doubt about it that the park is not haunted. Among the victims who were buried because of the yellow fever epidemic many were criminals. There is definitely evil spirits lurking around the park. 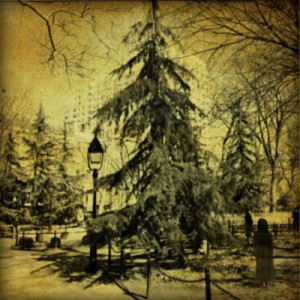 Can you see the Ghost?

Lets Check this video out!