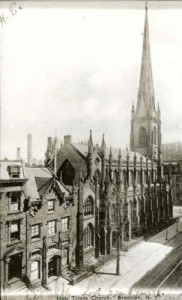 This grand church is located at 157 Montague St. Brooklyn, NY 11201. The history of the church says that it is the oldest Episcopal congregation in Brooklyn. Originally it was located on Washington street but was moved several times until in 1969 it was moved to Holy Trinity building. The founders were an Anglican-minded Ann and Joshua Sands who established a prayer place in their living room starting 1778. During this time the American Revolution was on the mist and this group decided to sought services of their own practices rather than attend the Dutch Reform Church. As the congregation grew it found home in a church located at the High Victorian Gothic building still standing at Clinton and Livingston streets, built in 1877. Following that it moved to the building of the church in which it now stands at opened in 1847, although following years on controversy it closed in 1957. 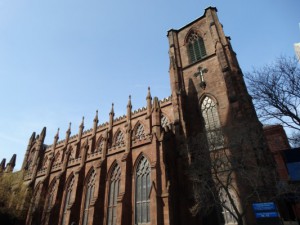 The building says to have been mostly empty for the next 12 years that followed; till in 1969 it became occupied.This building is now called St. Ann & the Holy Trinity to honor the history of the building. The church was declared a Historic Landmark in 1987. 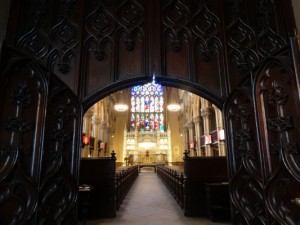 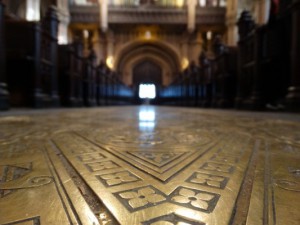 The Gothic architecture of the church is clearly seen to be the type of style that flourished in the high and medieval period. Through a series of Gothic revivals this 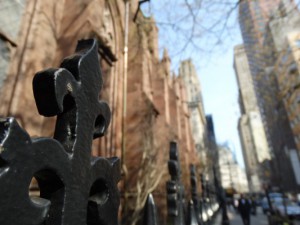 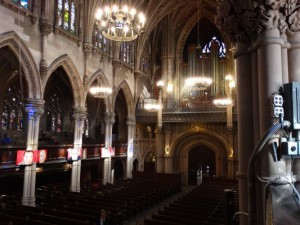 type of architecture evolved through the 19th century. The designer of the Holy Trinity building was known to be a prominent American architect, named Minard Lafer. He was known to be an influential American architect of churches and houses during the early 19th century. Passing by and entering the church the first thing that will strike you its grand scaling height. Its appearance contains flying buttress allowing it to spread to even greater heights. The buttresses around the church are elaborately designed and the decor gives you the sense of movement. Its Gothic arches also add to make for 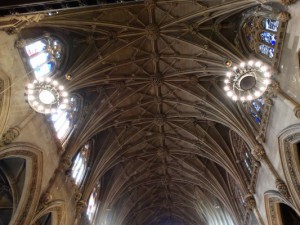 an aesthetic value and beauty. Both of these Gothic attributes were written in myths, stating that churches were made in grand elevation in attempt to reach the heavens. The great scaling of the church is topped on the ceiling also known as vaulted ceilings. This type of delicate detail is a common attribute of Gothic architecture. Being that the vaulted ceilings of the church is so detailed it can be perceived to be a skeleton, running from the front to the back. You will find yourself in an airy space in the center with balconies on the left, right, and center.Stained glass windows line the church with magnificent artwork that is depicted on each window. It is noted that these windows were created 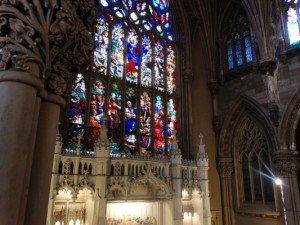 by William Jay Bolton, with the help of his brother John Bolton, between 1845 and 1848. The windows allow light to enter the church during the day and at night chandeliers ornate the church. This giving off a dark, dim lighting that will cause for chilling but thrilling ambience. Walking through the church the Gothic elements through the architecture are evident. All this in combination will leave you with a wanting to continue exploring the church in its entirety.

As you continue exploring you’ll learn that it is not simply exquisite Gothic architecture, but it is a decaying one. Decay is one of the most prominent Gothic atmospheres. It encloses you as soon as you walk in. You see and smell the decay everywhere. Peeling paint from the walls, broken stairs, water dripping from the ceiling and the stale air – it is all the physical representation of degeneration of the past, the 18th century America. There is only one visitor and not even one priest in the church. Why is it so empty, cold and decomposing? The reason is that our values and standards have changed. 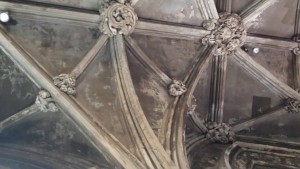 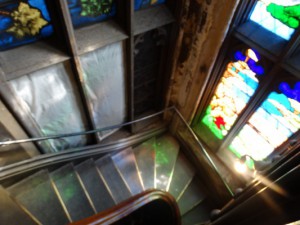 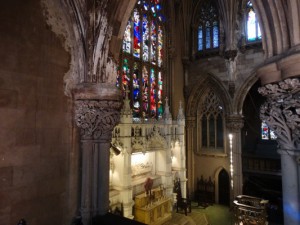 This physical falling apart structure is a representation of shifts of our values and social norms. Reading the changes of this church as a story through New Historicism and Cultural Studies opens a new dimension in looking at our times versus the past. New Historicism looks at a cultural context of a literary work, but let’s apply it to the actual physical structure. This decay can be used as a symbolism of how American started to change and leave the old beliefs behind. Historically immigrants used to come to America for freedom of religion.That is how this church came to exist. Now we want other freedoms and don’t need old rules. That is what was once a holy place now is empty and decaying. This church was built when women couldn’t vote, when racism was acceptable, and homosexuals were perceived as mentally ill. And mentally ill were treated as animals. Now it is not the same America. We like the way it is now, and those old ways will never be resurrected. Even faith is not as strong and powerful as it was in 18th century. The decaying church is also a symbol of this degeneration of faith. Today one third of young Americans don’t belong to any religion.They prefer to spend money on technology rather than going to church and donating for its reconstruction. Every year less children are brought to church by their parents. As these children grow up they are further away from faith and now don’t bring to church the next generation. William Faulkner, in his short story A Rose for Emily, also uses an example of children that never wanted to return to Emily’s house to learn to draw and how they are distanced themselves from her. Faulk 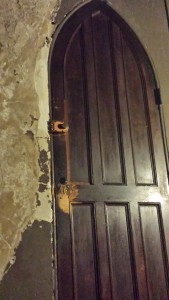 ner uses Emily as a representation of the old south, and the children are representing the new generation that does not want to go back to pre-war times and values. “Then the newer generation became the backbone and the spirit of the town, and the painting pupils grew up and fell away and did not send their children to her with boxes of color and tedious brushes and pictures cut from the ladies’ magazines. The front door closed upon the last one and remained closed for good” (Faulkner IV).

They shut the past to never come back and were relieved by it; just like people deny their heritage when they have nothing to be proud of. Emily all her life tried to cling to the long gone pre-war south. There is always some one like Emily in each town. The only lonely visitor in a modern suit in this 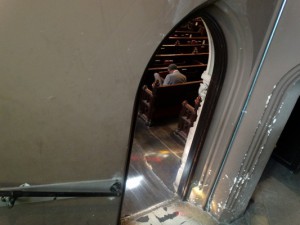 decaying church only emphasizes the difference between the past and the presence. This church is not only an architectural marvel. It is also a monument to the past. Once strong and powerful symbol now slowly is deteriorating with every piece of paint.

The plate says ” I AM THE RESURRECTION AND THE LIFE”. Will the faith ever be resurrected? 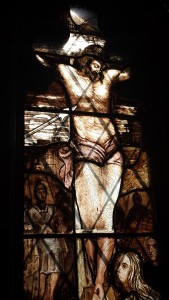 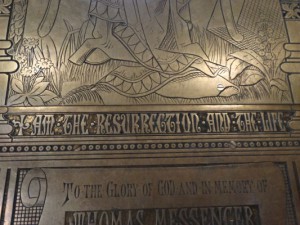 But don’t let the decay scare you yet, there is more to explore here… 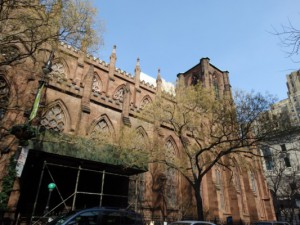 The church has many doors and subterranean passageways inside as well as outside the church. There is a opening which leads down to the subway with just stairs. As night falls the only guidance you have is an ominous green light that flickers in the distance. This subterranean passage is a boundary between old and new technology (the church and the subway tunnel) have been crossed. And as well, as out of the church there are passageways in the church. As you walk into the church that is where the real feel fun begins…

As I walked into the church, the doors shut behind and there was a staircase which lead nowhere. 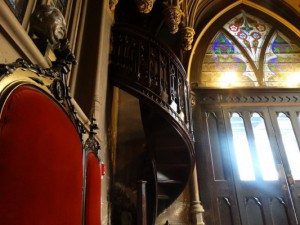 Which pictures show, there was a bigger tower that was once a part of the church which, now no longer existence. Yet, why keep the a staircase if it leads no where? As you walk further in the church there are two staircases on either side of the church, which lead to two separate balconies.

As I walked down the aisle, some of the pews were covered with tarps. The alter was the only thing to still be perfectly preserved. 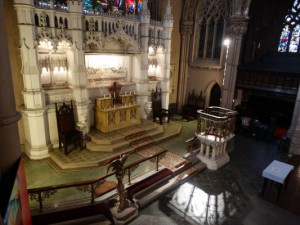 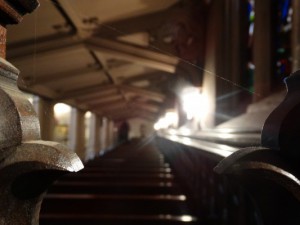 All the crosses in the church are covered; everything around the church seems to be falling apart. As I looked around, there are lots of doors and few of them are locked. For a place of worship that is open to those in need and guidance.Its normally neat, proper, warm and open. Instead this church was dark, dusty with spiderwebs all over as if it wasn’t in used in some time.

This is uncanny, something that is familiar suddenly becomes unfamiliar. The uncanniness of the St. Ann’s and Holy Trinity church is unshakable. Every church as a pastor, a father, a person of the cloth, yet, there was no one to be found but  a strange man who was sitting alone in one of the pews. “Pushing open the door gently, he saw a person kneeling before the altar. As he approached nearer, it seemed not a woman, but a one in long woolen weed, who back was toward him. The person seemed absorbed in prayer“(Chapter 5, The Castle of Otranto). 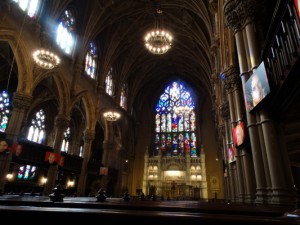 Frederic the long lost father of Isabella was looking for Hippolita, the Queen of Otranto. When he stumbled in the church he taught he had found Hippolita and to his dismay he was mistaken as he walked closer to the figure that was praying. “Then the figure slowly turned around to Frederic the fleshless jaws and empty sockets of a skeleton, wrapt in a  hermit’s crowl” it was a specture (demon) who was praying in the church. I’m not saying the strange man was a demon but not once did he turn around to notice what was around him, and from every angle his face could not be seen. And left without a trace or sound. Afterwards, I walked up the stair case 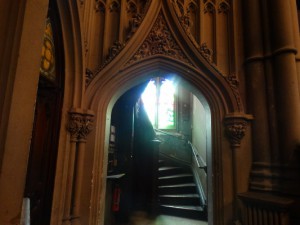 to one of the balconies, they were poorly lit,which made it’s really dark aside from the few pieces of light which came from the windows. The moral windows almost look as if their eyes are blacked out and were watching you as you moved. With this observation, the windows meant to show you Jesus’ life and death to create this feeling of prestige and appreciation, just became creepy instead. On the other hand, there was quite as many shadows and more dust and cobwebs. Which created an eerie feeling, and a chill down my spine yet the doors and windows were not open. Then, as I started to leave I heard the floor slightly creak with every step that I took. As if at any moment the floor could give or maybe it did to hear where you were going…. ” I can tell you one thing, said the doctor, “if it was the younger sister sneaking around this house at night, she had nerves of iron. It watches,” he added suddenly (Haunting of Hill House, Chapter 2). Hill house and St. Ann’s both are similar as they both seem to be watching your every move while something or somebody is lurking within the shadows, waiting, watching. 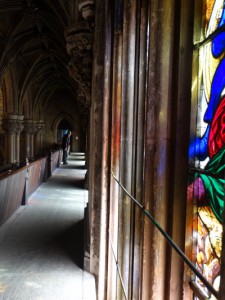 Yet there’s no one around