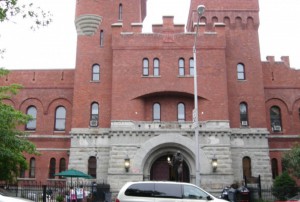 Are you looking for a place to have fun? You should go to the YMCA Park Slope Armory. Wait… When you arrive there its a huge building. YMCA usually associates with fun and promotes activities with people but in this huge castle like building? Today me and my classmates wandered around and this huge armory caught our attention and we decided to choose this for our research. 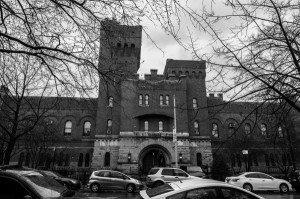 History of the Armory.

The YMCA Park Slope Armory was built in the Late Victorian Era. It was built in 1893. The original name for this building was called the 14th Regiment Armory, but nicknames are given to it which were called Eighth Avenue Armory and the Park Slope Armory. Originally this building was built for the New York State Militia. The Armory was designed by William Mundell who decided to built this like a medieval military structure in Europe. The building itself was taken over in 1980 by CAMBA a non-profit organization who used it to operate for Women’s Shelters. In 2007 the armory was rebuilt into a sports complex. The armory became an landmark in 1998.

The armory itself can be decided as a Gothic Architectural because the designer himself William Mundell built the armory like a military structure. It was also built in the style of the Late Victorian era. However even if it was built like that we found other evidence that indicate that it is Gothic. 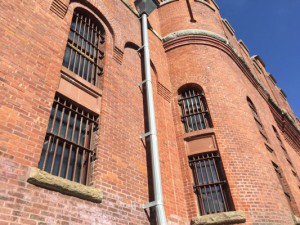 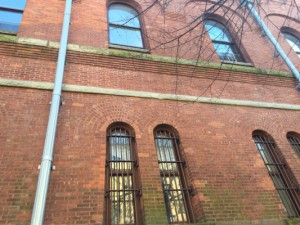 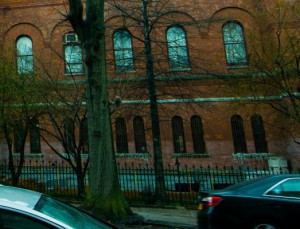 The Theoretical Concept that applies to this castle is the uncanny. When you arrive at the entrance its all open arms with one entrance you see the fences around it. However when you walk around the building you see that the windows itself is barred. The fences themselves have the a pointy tip which represents a sharp object. If you didn’t know that it was the YMCA Park Slope Armory you would ask why is there a castle in the middle of this area and the size is different from, the house close to it. When you look at the building from a distance you realize it could be something scary inside because of the windows being barred on the side which is strange but the entrance windows aren’t barred at all and there is only one entrance.

The literary text that our Gothic space can be related to many texts. The windows with the metal bars could be viewed as being trapped like Jonathan from “Dracula” by Bram Stoker who finds himself as the prisoner in Dracula’s castle. One of the quotes from Dracula says “But I am not in heart to describe beauty, for when I had seen the view I explored further:doors, doors, doors everywhere and all locked and bolted. In no place save from the windows in the castle walls is there an available exit. The castle is a veritable prison, I am a Prisoner!” Another quote that relates is how Jonathan calls it a castle where the YMCA Park Slope Design was designed medieval times. “The castle is on the very edge of a terrible precipice. A stone falling from the window would fall a thousand feet without touching anything.” Lastly when Jonathan is inside the castle he hasn’t seen the daylight he says ” I must have been asleep, for certainly if I had been fully awake I must have noticed the approach to such a remarkable place. In the gloom the courtyard looked of considerable size, and as several dark ways led from it under great round arches it perhaps seemed bigger than it really is. I have not yet been able to see it by daylight……” The quote can be compared although size wise the armory isn’t as big being inside would block you off from the daylight. 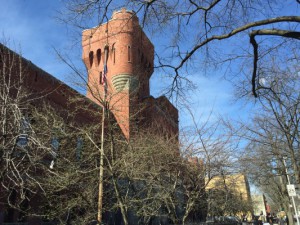 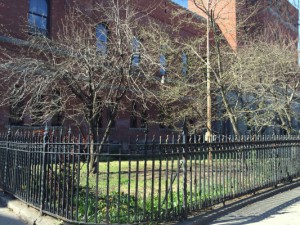