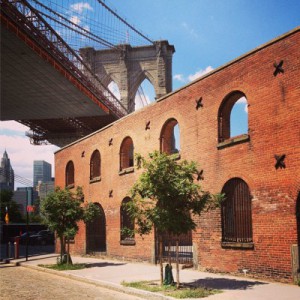 One day while touring the Brooklyn Bridge, Me and my classmates came across a building that seemed out of place. It was located under the Bridge and lay on water St. It was divided in to two parts, one part a garden/courtyard and the other half seemed like a warehouse. It looked like an abandoned warehouse to us because of the half finished windows, gates, there not being a roof on a certain part of the building and the way others treated the building.  Everyone in that area just walked by the building and didn’t even acknowledge that it was there. The building it’s self looks really old and run down. There were many black X marks posted all around the building aswell. . 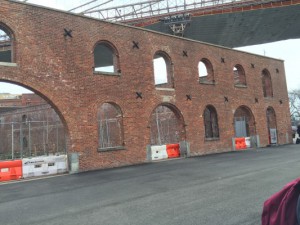 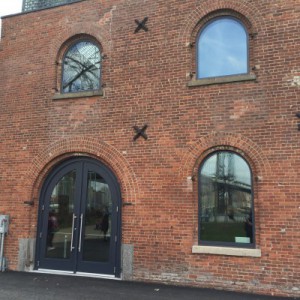 When we got close to the building, we saw that no one was in either part of the building. We tried to get inside the building but could not because everything was blocked off. We could tell that this building is trying to isolate itself from the world because everything is blocked off. The warehouse part of the building had windows & doors but the glass that was used was really dark and we couldn’t really see inside the building. This building is being converted into a theater currently. When we looked into the garden, we saw a bunch of plants and trees that were planted and still growing. The walls that surrounded the building were really old because the bricks that were used were turning white. “This is known as Efflorescence. It is an accumulation of minerals and salts on masonry surfaces, such as brick, cement, and sometimes stone.”(Decker 1). There was a lot of this white material on the inside of the building which meant the building has been there for along time. This meant that this building has been here for a very long time and is getting old. Another characteristic that stood out was there was a black cloth on certain windows and gates. This warehouse was trying to block out something from the outside world or just trying to isolate it’s self from the outside world. 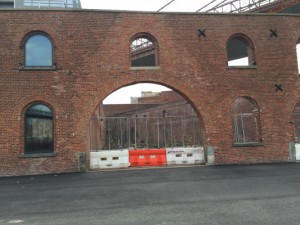 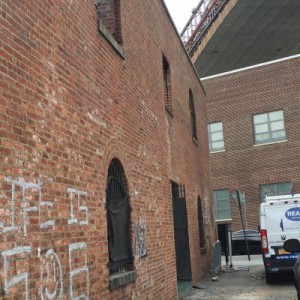 “The building was originally built in 1865 as a warehouse for Tabaco by the Lorillard family.”(Creative 1)  “The total size of the warehouse is approximately 25,000 square feet, offering an 18,000 square-foot, column-free footprint.” (Frost 2). “The tobacco arrived via train or boat from the south and was stored at the warehouse before being distributed.  All though many of the surrounding warehouses and buildings were demolished in the 1940’s, this particular warehouse was spared a similar demise.  In 2013 the building was gutted leaving only the original walls, making space for a theater. inside.” (Creative 5)

“St. Ann’s Warehouse launched a $31 million campaign to transform the Tobacco Warehouse into a year-round performing arts facility and community hub. It was designed by a team of Marvel Architects and theater consultants. The Structure includes: A large, versatile theater space that can hold 300–700 people for St. Ann’s core theater and music programming, festivals, and special community events. A clerestory ribbon of clear glass bricks bridges the original brick walls and the roof of the new theater. A multi-use Studio, dedicated to local artists and community groups to help them with smaller scale programs and events. An open-air Triangle Garden forged within the existing brick walls will be open to the public during Brooklyn Bridge Park hours. It is Designed by the Brooklyn Bridge Park landscape architects, Michael Van Valkenburgh Associates. The Garden will provide shade in the summer and shelter from the wind in winter.” (Creative 2) 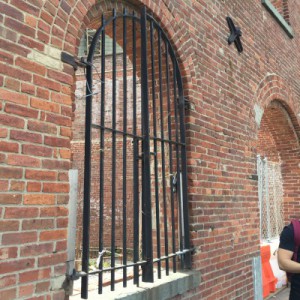 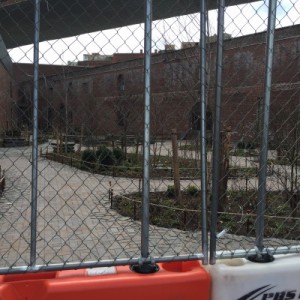 The reason St. Ann’s Warehouse is Gothic is because of the characteristics of the building. The major one is how it is isolated or cut off from society. You cannot enter into the building in any way and there is no one inside the building either. Everything is blocked off. We can relate this to the creature in Frankenstein because he was isolated from society and felt lonely when his creator left him when he was born. The creature felt lonely and isolated from society and this was a major reason why he becomes a monster in the book. Another characteristic that stands out is the black X marks all over the building. Those black X marks all over the building tells us that this building is old because buildings in our time don’t have this. These marks give of a darkness/stay out kind of vibe to the audience/crowd looking from the outside to the inside. 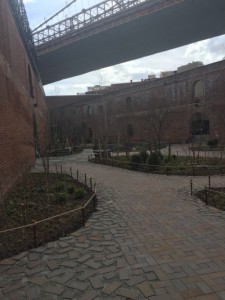 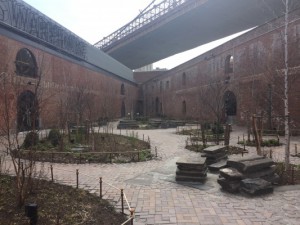 The Gothic Theoretical concept that relates to our Gothic space is “Looking Awry”. There were many characteristics of the building that could fit in with this. The one that stands out is a window located on the back side of the building. Right on top of the window, there is a outline of a person hanging off something and there is a lot of blood coming out of him/her that was formed by Efflorescence. This was formed naturally and was not physically made by someone. It’s not an obvious picture but if you look closely, you can see it. The blood seems to be coming out of the neck area. When you look at the back side of the building from a far, you won’t see this image right away. Once you get to a certain distance, you will be able to see the image and it’s very hard not to notice it once you see it. Another example of Looking Awry in our space is the walls inside the courtyard/Garden. When you see the brick walls from a far it looks somewhat normal but once you get closer to the building and get a better view of the inside, you can see that the brick walls are starting to turn white due to Efflorescence. Once you notice this about the brick walls on the inside, it’s something you can’t Unsee and you will always look at. 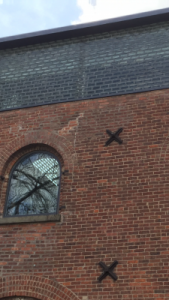 The text me and my group are going to use to compare it with is “The Castle Of Otranto”. In chapter 1, the son of Manfred, Conrad is killed in the courtyard by a Helmet. “Manfred, less apprehensive than enraged at the procrastination of the nuptials, and at the folly of his domestic, asked imperiously what was the matter? The fellow made no answer, but continued pointing towards the courtyard; and at last, after repeated questions put to him, cried out, “Oh! the helmet! the helmet!” (Walpole 28). In our Gothic space, when you look inside the part of the building with no roof, there is a courtyard inside of the building. There are trees and flowers growing all around the inside of the building. There was also a helmet laying down on the floor all the way in the back of the courtyard and also a few around the outside of the building because of construction that was taking place near by. This relates to the Castle of Otranto because the setting is very similar. The courtyard is a major setting in the book because it is where the helmet killed Conrad. Just like the novel, The courtyard in our space plays a big part in the gothic atmosphere. The characteristics of that half of the building is one of the key reasons why it is a Gothic building.