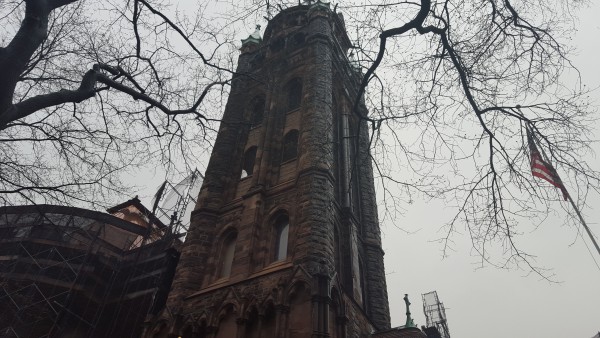 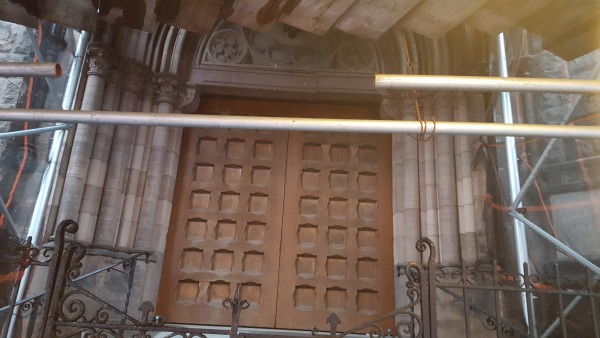 St. Augustine is a Church located at 166 6th avenue in the bustling downtown Brooklyn. There are many churches in the area but I can assure you that St. Augustine has a lot of great gothic qualities. When I first came upon this church, I thought it was a castle at first because it is really tall and rather large in size with several pointed roofs and made out of stone. Even the dingy old color of the stone make it feel more out of touch with the surrounding area. Not to mention the colossal doors all around that make you feel significantly small when walking through them. Having the dead trees around gives it a spooky look as if you shouldn’t come close to the place.

This churches has key gothic architecture to it such as numerous flying buttresses, vaults, pointed arches, and tall stained glass windows. There are also a few cherubs’ faces on the outside walls. Inside the church is just as gothic as the outside. Inside is all white with gold accents. It consists of high ribbed vaults ceilings, more flying buttresses, old chandeliers and several religious statues. 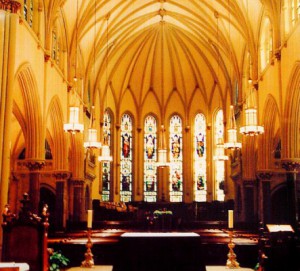 St. Augustine can be compared to the castle in Castle of Otranto since it does take place in well a gothic castle. So seeing the church it immediately reminded me of the book and how the castle would be portrayed as.

History of the Church: gothic from the beginning 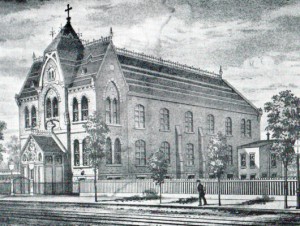 From the book, Saint Augustine Church, guide to the catholic church of saint Augustine Brooklyn, New York. Photography by Monte Allen and written by Robert J. Whelan. The Church when after it was first built in the 19th century.

Fitting to its gothic atmosphere, this church also bares an interesting history of itself. Purchased by Reverend Edward W. McCarty as vacant lots, he announced an architectural contest in 1887 for the construction of the church. Of the 10 entrees from prominent firms, one of them won with their 14th century English gothic design. So even when it was first built, it was conceived as an old castle-like building as its construction started in 1888.

A school was built in and open in 1895, adjoined to the church and known as the St. Augustine Academy. In December 16, 1960, an event that no one foresaw occurred. 2 planes, a United Airlines plane and a TWA aircraft, collided into each other over Staten Island. The United Airlines plane narrowly missed the church, crashing a block away killing 6 people on the ground and all 128 of its passengers. Not only people attending the church but also 1,500 students from the Augustine Academy were spared from possible deaths and the destruction of the church. 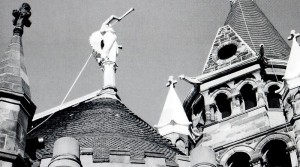 It is said by those people that the copper statue of Gabriel, standing on the eastern apse and holding his horn, protect the church, school, and the occupants inside. Could this be possible that the stature came to life to use its powers to do so or perhaps, angel channeled their power through the statue and church as a whole to steer the crash away?
This related to Sigmund Freud’s works on the uncanny as it refers the strange and mysterious, which is fitting for a statue that has a power to protect the people under it from possible doom. Also similar to the events in The Castle of Otranto such as the Alfonso the good, the original owner of the castle, coming out of his painting to confront Manfred or the giant helmet falling on Manfred’s son which is belonged to a statue of Alfonso inside the castle. 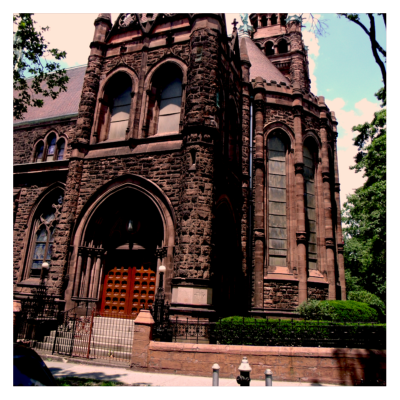 The Uncanny is something that arouses dread and horror. When we think of a church we think of light, prayer, forgiveness, a close relation to a deity, innocence. It is very odd that most churches tend to follow a gothic style of architecture.

“As we wound on our endless way, and the sun sank lower and lower behind us, the shadows of the evening began to creep round us….By the roadside were many crosses, and as we swept by, my companions all crossed themselves.” – Dracula, Bram Stoker

The architecture of the church itself makes the surrounding areas so much creepier that people have to cross themselves in order for respect to the church and as a blessing to them that nothing bad happens to them.
The Sublime inspires awe, an emotional understanding that goes beyond rational thought. For this theoretical concept I would like to turn to Dr. Jekyll and Mr. Hyde:

“That night I had come to the fatal cross roads. Had I approached my discovery in a more noble spirit, had I risked the experiment while under the empire of generous or pious aspirations, all must have been otherwise, and from these agonies of death and birth, I had come forth an angel instead of a fiend.” – The Strange Case of Jekyll and Mr. Hyde, Robert Lewis Stevenson

This paragraph stands out because when you go inside a church at least for some people a new person comes alive inside of them, a person filled with hope and love. This is the one place where some find refuge from the ugliness of the outside world. That is how they leave the church with renewed purpose and the will to keep going.
Written by: Harold A. Fachin, Charyssa Morgan and Aneita Torres