The Haunting of Hill House

Greenwood Cemetery is as beautiful as it is eerie, as one would sometimes forget that they were in a massive graveyard that spans for miles due the the gorgeous scenery. Walking towards the entrance of the graveyard is a journey by itself, the walk is quite long but it’s length is negated by the greenery peering through the fences. This makes your imagination run wild as you may wonder what really lies within the cemetery. This is akin to Elanor’s imagination wondering during her travels to hill house ” The journey itself was her positive action, her destination vague, unimagined, perhaps nonexistent. She meant to savor each turn of her traveling, loving the road and the trees” (The Haunting of Hill House ). 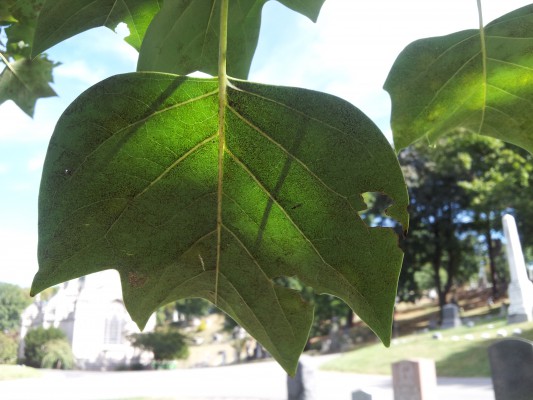 Once inside the cemetery, the sheer magnitude and sublime scenery will simply blow you away, but as you venture further passing gravestone by gravestone an uncanny feeling takes hold of you. You’ll come to the realization that you are in a graveyard despite the gorgeous greenery, surrounded by thousands upon thousands of graves spanning in a 478 acres radius; questioning why you set foot in such a behemoth of a place. This is comparable to Elanor’s first visit to Hill House, “Why am I here? She thought helplessly and at once; why am I here? The gate was tall and ominous and heavy, set strongly into a stone wall which went off through the trees.” (The Haunting of Hill House). 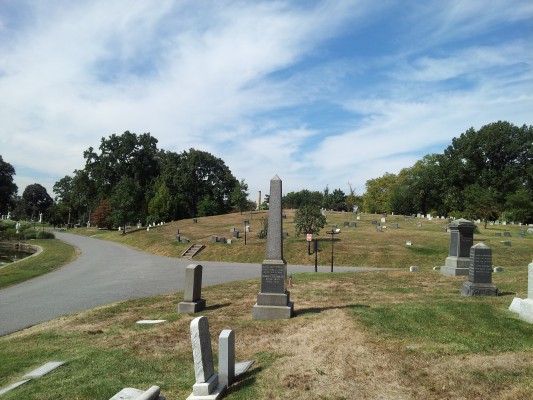 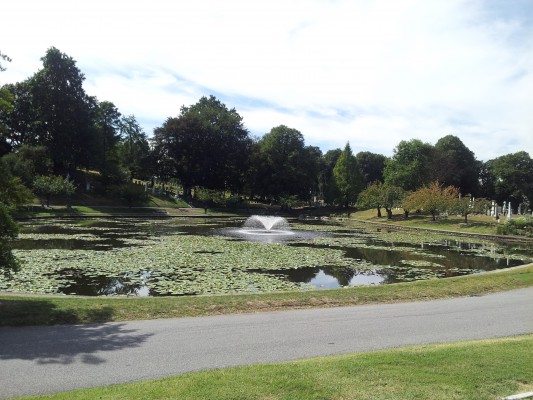 Greenwood Cemetery’s beauty is absolutely diminished at night though, as the cemetery undergoes a menacing transformation, altering it’s persona. No longer does the cemetery try to choose between creepy or beauty, it sticks to one feeling to emit, terror. The cemetery feels as though it is alive, as if the thousands of corpses are  watching your every move. All the leaves look as though they have been deprived of their youth and energy. The darkness of the once vivid pond seems as though it would pull you into it’s abyss if given the chance. The air thick, heavy and cold as if Greenwood itself is trying to grab hold of you making sure since you dare enter, you will not leave the it’s grasp easily. Similarly to Hill House, ”  a badly turned angle, some chance meeting of roof and sky, turned Hill House into a place of despair, more frightening because the face of Hill House seemed awake, with a watchfulness from the blank windows and a touch of glee in the eyebrow of a cornice.” (The Haunting of Hill House) 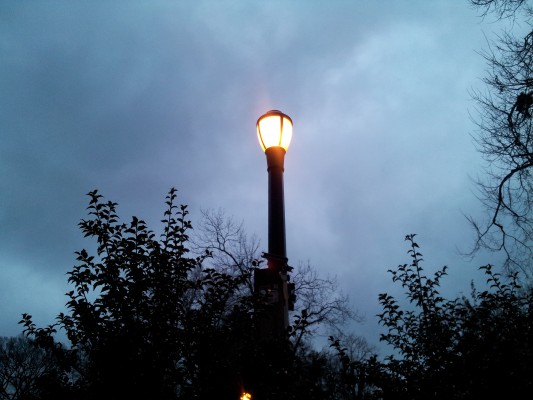 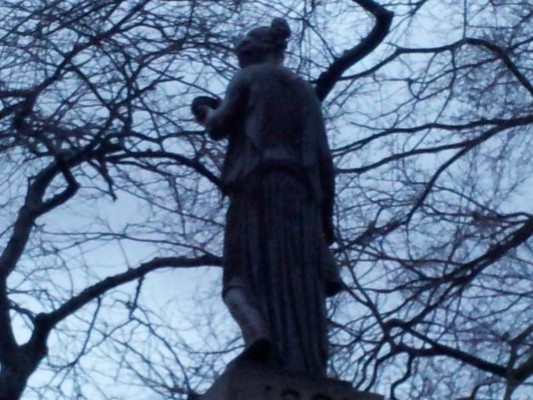 The cemetery does have a very beautiful side to it; the vegetation, the magnificent tombstones and statues, even the architecture can take your eyes away from your phone! But even walking around the cemetery, you being to notice this uncanny feeling which the cemetery emits. The outskirts of the park are fenced off to keep unwanted visitors out. However, as time has passed by, plants have consumed the gates, turning them into immense walls of leaves and shrubs, concealing the inside of the cemetery and what lurks within. This brings an uncanny feeling about you, much like Jonathan Harker felt in Bram Stoker’s novel “Sometimes, as the road was cut through the pine woods that seemed in the darkness to be closing down upon us…which…produced a peculiarly weird and solemn effect.” He halso says “There are many trees on it, which make it in places gloomy.”

As you walk into the cemetery, there is nothing but a beautiful and magnificent entrance, which looks something out of the medieval era. With tall, pointed structures towering high in the sky, and circular arch entrances, one can’t help but feel as though they are walking into a castle. However, as you get closer, you begin to notice the pointed edges, the dramatic and dark curves and designs, and the gothic statues on this colossal monument. As you walk further into the cemetery, no matter which path you take, you will come across a huge gothic building, filled with gothic architecture. You cannot help but describe the structure as beautiful but eerie. We see similarities within Stoker’s novel, when Harker first arrives to Dracula’s castle, when Harker says “…If I had been fully awake I must have noticed the approach to such a remarkable place. In the gloom the courtyard looked of considerable size, and as several dark ways led from it under great round arches it perhaps seemed bigger than it really is.” Dracula even mentions the appearance of the house, saying “The house is very large and of all periods back…to medieval times…and is close to an old chapel or church.” As you approach the entrance of the cemetery, just as Harker arrived to Dracula’s castle, the first thing you notice is the magnificence of the structure in front of you, with its medieval appearance. 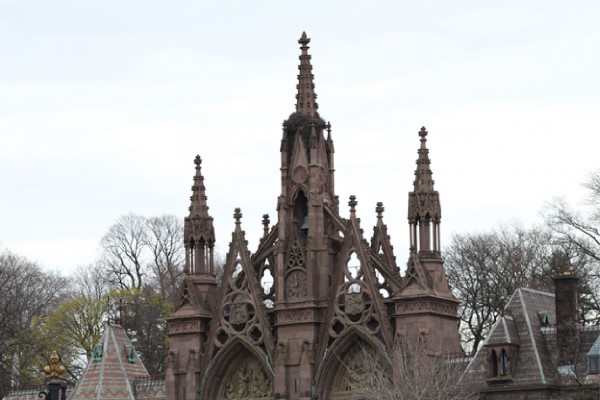 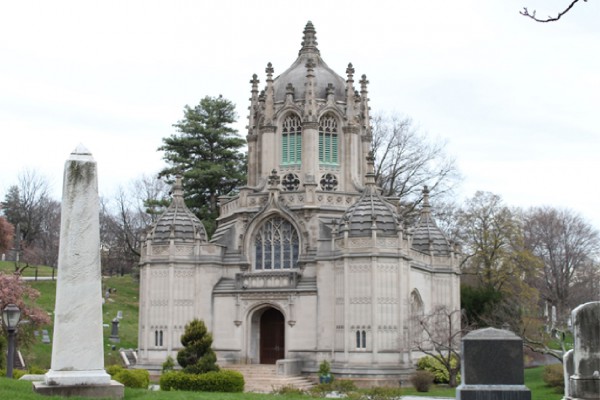 As you continue through the cemetery, you will learn that it is easy to get lost within. There are countless pathways and roads, all leading in different directions. This signifies the uncanny, as you take your first steps down an unknown path, you feel both curiosity and interest, but also fear of getting lost, especially in a cemetery for crying out loud! Dracula actually tells Harker after Harker comes into the castle “You may go anywhere you wish in the castle, except where the doors are locked, where of course you will not wish to go.” Much like Dracula’s castle, you are free to explore each pathway and road in the cemetery. However, if you look carefully, there are passages underneath the cemetery itself, where one is not allowed to enter, leaving one to only wonder what is beyond the doors in front of them. 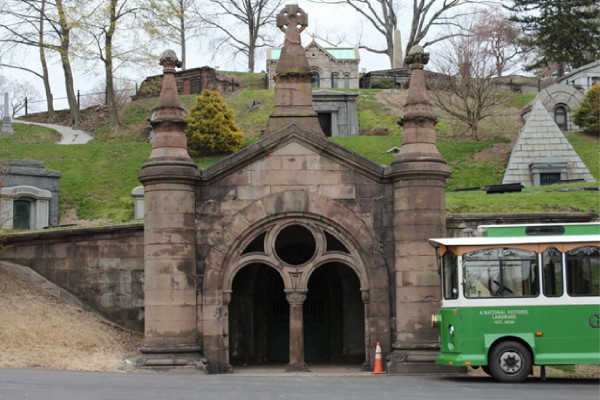 If you walk deep enough into the cemetery, you will come across a large pond, where you can sit on benches and enjoy the scene in front of you. However, as day becomes night, the pond becomes an eerie graveyard for those underneath it. You cannot help but picture zombies rising from the depths of the water, coming towards you to eat you whole (where my Walking Dead fans at?). The silence is deafening as the animals call in for the night; you cannot see what lurks beneath, until your nerves are tested by mysterious sounds emerging from the pond itself. Is it a zombie? A monster? A sea creature? It is up to you to decide if you stay to find out what it was that made the noise, or run like hell! Harker actually talks about a lake on Dracula’s property, when he says “…which make it in places gloomy…there is a deep, dark-looking pond or small lake.” 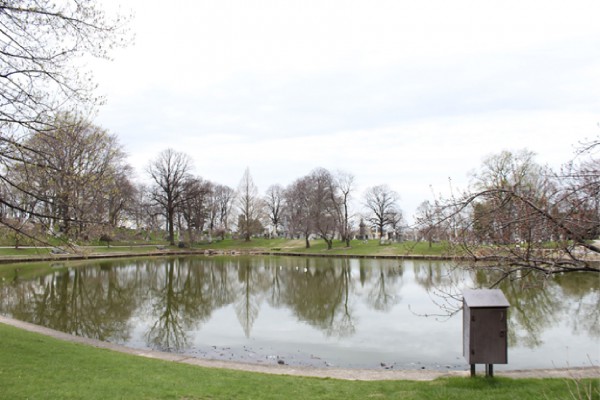 Similar to Bram Stoker’s novel “Dracula”, upon visiting GreenWood cemetery, one cannot help but feel as though they are walking into Dracula’s castle of death. Dracula himself signifies death, which can be seen at this location no matter which direction you turn your head. As you arrive at the cemetery, you can see the vegetation hiding what lurks inside, much like the forest which Harker had to travel through to get to the castle. You can even picture yourself as Jonathan Harker himself, arriving at Dracula’s castle and admiring the beautiful medieval gothic architecture before you. As you enter, you are confronted by countless passageways and roads, much like Harker as he travelled through the halls of the castle. However, some of the rooms in the castle were locked and forbidden to enter, much like the doors leading to the underground passageways in the cemetery. The dark and mysterious pond holds secrets within its depths, letting the visitor’s imagination take hold of them. Much like “Dracula”, GreenWood cemetery holds its secrets, and if you are not careful, you may end up overstaying your welcoming, losing yourself in the mysteries of GreenWood. 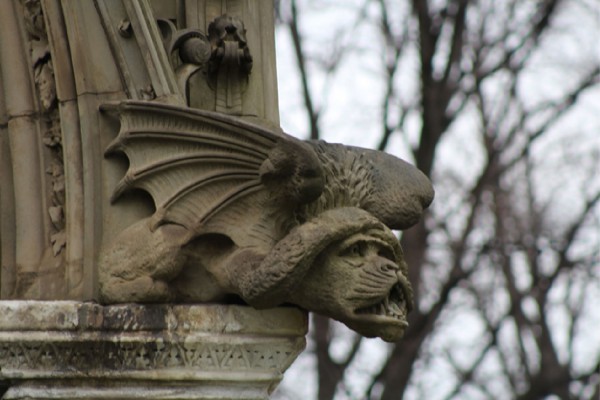 The statue in The Castle of Otranto brings about the death of Conrad and marks his place of burial much like the statue in Greenwood marks the burial of the mayor of the City of Brooklyn. Conrad was “buried” underneath the helmet that fell on him. “Shocked with these lamentable sounds, and dreading he knew not what, he advanced hastily, – but what a sight for a father’s eyes! – he beheld his child dashed to pieces, and almost buried under an enormous helmet, a hundred times more large than any casque ever made for a human being and shaded with a proportion-able quantity of black feathers.” (Walpole 5) This passage is referencing when Conrad was slain by the falling helmet that essentially buried him beneath. This is very similar to how the mayor of the City of Brooklyn and his wife are buried beneath the statue. Both the statue and the helmet in the text mark their final resting places. Its worthy to note as well that both the angel statue and the helmet are representative of “protection”. Angels are seen as protectors and bring others security. Suits of armor and helmets also provide one with protection and security.