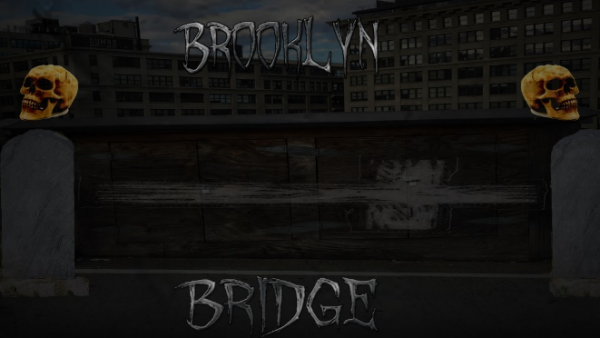 The bridge itself holds many dark history……..

A lot of things that looks simple on the surface may not be so simple when you take a closer look. Today, we are here to visit the Brooklyn Bridge, which seems innocent enough on the surface, but contains many deep, dark secrets within. During its initial construction that began in 1869, its designer, Augustus Roebling, had suffered a major accident where his foot was crushed by a ferry when it pinned against a piling, and died later due to a tetanus infection. His son who took charge of the project afterwards, but also suffered due to an unknown disease at that time along with many workers, and later was paralyzed physically in 1870. It was finally officially opened to the public in May 23, 1883.

The Brooklyn Bridge can be seen as Gothic in both architectural and theoretical. Since ancient times, bodies of water has been believed to be the gateway to the afterlife in many cultures, and the bridge, possibly being built on such a spot, possibly invoked the haunting upon its designer and workers, causing their unknown illness. Furthermore, in Asian myths, there were Chinese river rituals that involved human sacrifices to river deities. Koreans also had various river and water deities that are pleased by human sacrifices. Among southern Chinese and Siberian Khanty people, there was a time where the floating and burning of boats were practice by the Taiwanese 18 deities Royal Lords temple cult, showing how that there is always a correlation between bodies of water to the supernatural. While the deaths of the workers and the designer can be seen as haunting, which is a major theme in Gothic, I also argue that the bridge itself is abject as well. As defined by Julia Kristeva, the abject is a fear or horror that occurs when the boundary between a subject and an object becomes blurred, and the Brooklyn Bridge itself is where it disrupt the boundary of life and death, and can even be viewed as the reason as a direct connection between life and afterlife. 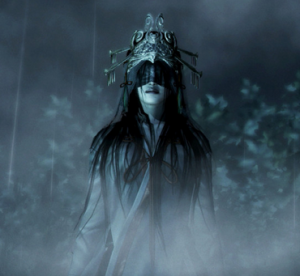 Traditional Japanese Priestess costume……they were living sacrifices that now that haunts the surrounding bodies of water; while this picture is from a game, this is based on a true Japanese folklore…..

Not many people know that the wine cellars existed. These cellars were underneath the ramps that led to the anchorages. These cellars were only used for a few years until they were completely abandoned during World War I. These cellars are over 50 feet tall, and are filled with pitch black darkness and are cold as well, giving it a haunted atmosphere, similar to The Haunting of Hill House by Shirley Jackson, where the nursery in the house was haunted: “It is only a noise, and terribly cold, terribly, terribly cold. It is a noise down the hall, far down at the end, near the nursery door, and terribly cold, not my mother knocking on the doors,” (Shirley 94)
My discovery about the cellars was an accident, where I visited the bridge and met a group of fellow tourists. In my conversation with the tourists, I was surprised to find out that such a place existed, an old, dark, cold and abandoned wine cellars, like it was straight out of a Gothic novel.

I found this to be uncanny, which is when something or someone familiar to you suddenly becomes unfamiliar. I passed by this place many times when traveling in a car, where I always saw workers storing construction equipment inside a small area, which I never knew that it was the abandoned cellar. Ever since I found out that these cellars were for wine storage and the fact that they were abandoned, I became a bit creeped out by it. So, in a nutshell, people walk or drive pass these dark and abandoned cellars everyday, unaware of what lies underneath. 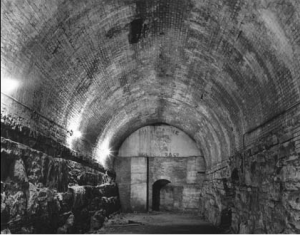 An old photo of the underground cellar, reminds people of the hidden secret passages underneath the castle, exciting, isn’t it?

With the knowledge that the wine cellar actually exist, the Brooklyn Bridge reminds me of the castle in Castle of Otranto by Walpole, described as: “…and hurried towards the secret passage….The lower part of the castle hollowed into several intricate cloisters; ……..the door that opened into the cavern…….” (Walpole 35) Like the castle, the Brooklyn Bridge has a long and peculiar history to it, accompanied by strange structures within the bridge. Whereas the castle in the Castle of Otranto had subterranean passages in the castle, the bridge has a hidden wine cellars under the bridge that are hidden from memory and view. The creation of it was largely due to a huge debt that had to be paid off, which led to the creation of rented wine cellars underneath the ramps of the bridges, which faded away in history. 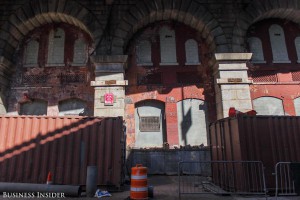 The entrance to the abandoned cellar; it’s closed off currently and we can’t get inside; who knows what you’ll find in there?

The bridge itself in design, is also Gothic. As a matter of fact, the architecture style of the bridge is called NeoGothic. This style is heavily influenced by both Castle of Otranto and Strawberry Hill, both written by Horace Walpole. The bridge features clustered columns, flying buttresses that laterally supported in an arch shaped, and are made of stones, which are dominant features of the Gothic architectural style. 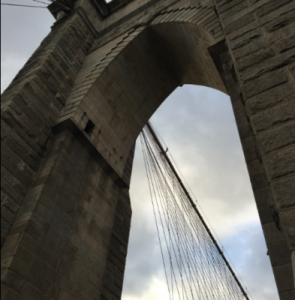 The buttresses supporting the structure laterally that forms the vault. The buttresses are also built of stone rather than concrete. 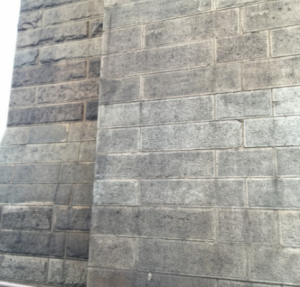 A closer look at the buttresses, you can clearly see that these are stone, not concrete.