Just like anything famous and newsworthy, Robert Capa’s “Falling Soldier” is not immune to any controversy. The photo presents a harrowing moment during war–the precise moment of death of a soldier–and that in itself is that attractive element that perhaps propelled it to become ‘The Greatest War Photograph’ of all time. The shock of capturing death is indeed riveting, especially at that point and time in history, and to expertly do so is genius, and therefore would understandably garner the attention of the critics. I personally feel that Knightley and Gallagher’s allegations are pretty lackluster, missing the backing of a solid, air tight evidence. What also took my attention was Knightley’s pettiness even after being proven wrong. Whelan makes very credible points while defending Capa, on top of enlisting the expertise of a chief homicide detective. Now, given the compelling facts in favor of Capa, doesn’t Knightley realize that with his persistence, he is actually making Capa look even more heroic than he already is?

It turns out that the Robert Capas “Death of a Loyalist Soldier” was in fact real, despite popular controversial belief. I believe that the pictures authenticity plays a big part on how it impacts that person looking at it, if the person knows it is fake they will just pass it by and it will have no effect on them. If the person believes the picture to be real them it will make them question what the person died for and how. A picture of a solider dying mid-battle makes you wonder if it is that simple to die instantly on the field. it makes you ask yourself is going to war worth it, if your just going to die just like that. I originally thought most war photos were fake because how do you get that close to the action and not get hurt or get captured.

First off, celebrities have some of the weirdest eating habits I have ever seen. But it is interesting that you get a glimpse into what some celebrities are like out of the spot light, and what they are into eating, which by the way some make you scratch your head and go “really? that’s what you like”. Also, the food he photographed looks amazing, i’ve seen food on TV shows that have not looked as good as his work. I’d use his pictures if I wanted to advertise a menu, where people could eat like the stars. Except the picture where there was a used condom hanging off the rim of a glass full of Guinness, I don’t think I want to know what happens in Busta Rhymes room while on tour.

I was able to catch some of the special effects for the most part. I will say that there is too much going on in the film at one time to really realize exactly whats going on. Also, the music did not help. But I did see some resemblance between photography and filming for example the staging of what was being filmed . People who make films and take pictures use the same techniques to get the shot they desire, after all films were originally called moving picture shows. Specific actions or clothing can provoke the reaction what the director or photographer is trying to show. The similarities between a photographic camera and a film camera is they both capture an image, the difference between the two is that a photographic camera takes still pictures, while the film camera can capture a moving image continuously. 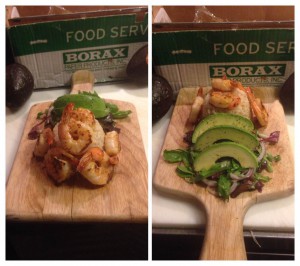 This is a dish i made at work which is a Grilled Thai shrimp with coconut steamed riced and avocado. The reason this looks delicious is the avocado, even though the main thing on the plate is the shrimp. The avocado is thick and fresh with no browning bits shown and the black pepper sprinkled on time. The shrimp does look good stacked on top of the rice with its grill marks, but the avocado draws the attention of the eyes.

Yes! American Breakfasts are too sweet, not only sweet but hearty. I’ve been to others countries and I’ve noticed that breakfast is very simple compared to a typical american breakfast that most families would have. But, as to if I think breakfast is important, of course it is, I feel like people function better is they have had a good nights sleep followed by a good breakfast. As a kid that grew up in Brooklyn a typical breakfast would be a sandwich that had bacon, eggs, cheese, lettuce, and tomatoes. After that was eaten it would be washed down with an Arizona soft drink. Depending on where you were from in Brooklyn this would be called a hood breakfast (no relation to hood college). 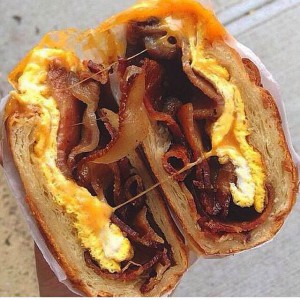 These picture are amazing and interesting because most of the people did not know they were being photographed. Due to the fact that people didn’t know they were being photographed the picture are as natural as it gets. What makes this so  relatable is the fact that in some of the photos you can see what train line the picture was taken on  for example there is one photo where a woman is sitting below a sign that says “City hall” and “Pelham bay park”, Most would know that the train she is on is now the 6 train. Also, even though these were taken during “The Great Depression” the facial expression are the same as the ones seen today. some of the expressions are blank, happy, saddened or just seam like they are upset.

Spiritualism documentation I feel would be an interesting topic to study. you see the idea of photography playing a large roll in anything spiritual. It was even once believed that taking a picture could steal your soul since you eyes were the window to your soul. Also, I feel like if you take a picture at different levels of light or spectrum’s you will be able to capture  something that could not be seen with the naked eye or will an ordinary camera. The reason I believe photography can play a role in documenting spiritualism is due to its recent use in many movies that have to do with haunting, ghost, and demons.

This type of work is possible to be intrusive, because it begs the question “Do you really want to know?” Some people might use this proof to challenge other people beliefs, also if you know these other beings are out there you’ll go searching for something you can’t come back from. I’m all for the idea of exploring to see if it is real or if its just all in my head.

These photographs like the photographs of the FSA show us the reality of what’s going on. No filters, no staged shots and if staged it was to dramatize the truth of whats happening. It is very sad that so many of us Americans are unaware of this drought that can and will or probably affected so many of us in the United States. Majority of our fruits and vegetables are grown in California. The land must be overworked and the government probably think they can easily fix the problem so it’s not greatly publicized as other problems we face now. Like the photographs from the FSA, these photographers used different filters to capture the full effect. Black and white makes the pictures seem more in depth and the land looks drier. On television commercials that advertise children and families in need the speaker is normally in color and the needy people are in black and white. It gets the attention of the viewer more being that things are normally seen in color for the common eye. Here the photographers draw you in and make you care and feel bad for whats going on as we should.

After reading both articles and seeing the difference in time frames, I believe this is a clear example on how history keeps repeating itself. Of course it’s extremely awful that these things happened to innocent people. However, it does make me wonder why these things keep happening. We as people are so wrapped up in things that are unimportant, we are so oblivious to things that are happening in our local communities. We walk pass homeless, needy, and injured people every single day. I get that we can’t help everyone, but how can someone take us seriously when we want to protest something thats happening hours and hundreds of miles away when we don’t even help the people that are begging us in our faces. Its morally wrong that a police officer is actually aiming to shoot an unarmed civilian. However, this is the government that we elected someone is training these officers and if this can happen in multiple cities years after years, then maybe we are attacking or reacting on the wrong people. Maybe we need to step up and not just want to be heard when someone dies but all the time. I feel even though the officers were wrong and no one deserves to die but when you’re always the victim sometimes its by choice. We put ourselves in certain situations. It was extremely courageous that these photographers were able to capture these moments for us but also utterly reckless, stupid, and ridiculous.