In my opinion, for spiritualism to be documented effectively, a very abstract component must be lured out of one’s viewer–faith. A viewer doesn’t have to share the photographer’s religious denomination to appreciate the work; a viewer only has to have a smidgen of understanding, that openness of the mind. Without it, the viewer would not ‘see’ anything at all, no matter how skillful the photographer is or how convincing the image turned out to be.

For me, personally, I believe that spiritual documentation is possible. Although not a very religious person myself, I simply think that anything is possible in this world. In this case, however, a photographer must be fully immersed into the subject: He or she has to believe it. For it being valuable, sure, for any type of evidence towards its accreditation (or otherwise) must be kept and accounted for. It’s like graffiti, once rejected for its impetuous and rebellious nature, but is now considered an art form; spiritual documentation can be the same: it might not receive a great deal of following right now, but people would eventually see how its uniqueness can be translated to creativeness. And then, again, one doesn’t have to believe in its validity for it to be considered beautiful.

Intrusive? Yes, for the camera being present is like a perpetual intruder. I feel that it undermines the sanctity of the supernatural, and with popularity of image editors out there, a non-believer could easily discredit a photograph by referring to these software. Ultimately, manifestations must be experienced to be called true. A photograph is merely a medium to speak of its existence, and it is only up to the viewer to believe it or not. 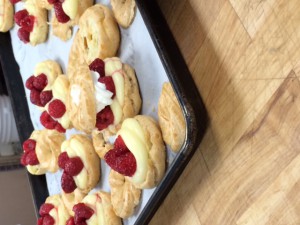 Although I am not completely acquainted with the most popular approaches on photography back in Evans’ time, I feel that his technique makes the subjects look truly unaffected and real. You can see this through the effortlessness of the shots–subjects looking wary or being unfocused or even not looking at all. Others have no idea that they are being photographed, thus simply doing what they normally do, from reading the newspaper to snoozing or biting one’s lip in deep thought. I really find this fascinating (the ability to capture a subject’s inner unfiltered emotions), because I believe that capturing such moments take a certain dexterity and timing that cannot be replicated all over and over again. For some reason, it reminds me of Southworth and Hawes, as they are famous for drawing out the personalities of their subjects. However, in contrast to them, Evans was able to do such an undertaking without the fluff of props and, rather, by just taking in whatever is available at the moment. As for similarities to today’s riders, I would say that there would be instances when riders would also exude the same facial reactions as Evans’ subjects. For example, if taken at the right moment, without the camera being seen, such artlessness can be captured from today’s riders. Unfortunately, today’s riders are very acquainted with the camera (and it’s various forms), so some photos might feature subjects deliberately posing or altering their reactions. 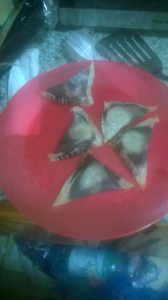 These are Wontons that I made that are filled with nutella, marshmallow and banana. I think the hard shell of the wonton and the softness. The edges that I hand crated myself give an added feel of authenticity. You can see the chocolate and marshmallow lightly spilling out of the sides of the wonton. I also think that visual of seeing the banana gives a familiar feel to a person who would be apprehensive about trying this. 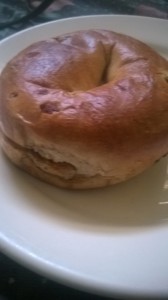 I think breakfast is an essential part of a persons day. It is essential when trying to gain energy for the day so you can start off your day properly. The American youth are marketed sugary cereals but I don’t think as a whole American breakfasts are too  sugary. Often you see several commercials that include cereals like honey bunches of oats, special k and even frosted flakes. There has been more of an incentive on healthier foods compared too sugary foods considering the United States are one of the most obese countries in the world. I would usually eat a two bagels for breakfast with cream cheese as a way to start off my day. 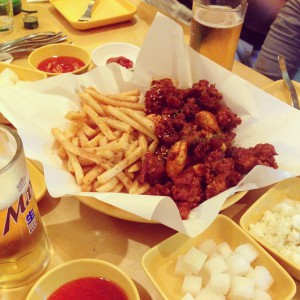 This is french fries and fried chicken when I’m having some beer at a bar with my friends couple of weeks ago. The fried chicken is seasoned with Korean traditional hot sauce, and fries are just regular French fries. It may look like a just ordinary French fries with fried chicken, but the hot sauce makes huge difference. And last but not least, with a sip of beer, it just makes whole lot better.

Subway is a very interesting area. Even if you take subway at the same place at same time everyday, you get to see different people every time, and it never gets bored to peep at the people around me. People read newspaper, play games, listen to music, or just lost in a daydream. Sometimes people beg for money, some people give them money, while others try to ignore them. Millions people with different lifestyles take subway and it never gets bored, because even if most of the people look tired, or maintain expressionless faces, you still can feel the energy of their lives. I think Walker Evans also felt the same way and he wanted to record the energy of the people at that time, and tell the story to the people in the future. Probably that’s why he published his photographs 25 years later.

I ride the subway every morning and the blank stares and emotionless faces are very common on the train. People on the train tend to be reluctant to interaction or conversation with other people. I think Evans approach to taking these photos were in the perfect climate. The winter is when you would see significant differences between a persons emotions in their faces and mannerisms. I appreciate the effort put forth in concealing the camera and capturing people in unsuspected situations and movements. I do see man similarities with people in the photos and people on the train today. People who avoid eye contact at all costs by reading newspapers, looking down out their phone or just looking into a void in general.

This is red velvet waffles and fried chicken from Soco Restaurant. This chicken is fried and seasoned so well that when you bite into it melts in your mouth. has the right amount of crunch and moisture. The waffles are moist and have a crisp taste. Perfect combination for Chicken. This picture reminds me of southern cooking with a twist. simple dish made to perfection. 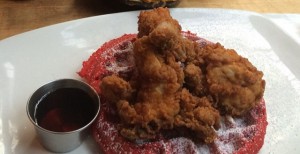 The topic of documenting spiritualism is an ambiguous thought to try to comprehend. I think it is a valuable form of photography because it can give incite into other peoples beliefs. I don’t think its intrusive if you are invited into the inner circle like Shannon Taggart was. I also think that it also depends on your own beliefs or the experiences you have. Some of Shannon Taggarts experiences may have been placebo effects and not anything substantial. Although the spiritual experiences may be true or possible it is hard to prove something like that through photography. Religious experiences are easier to capture but some religions are closed off and less open. Some religions may view that as intrusive.