I believe that Capa’s photograph of the falling soldier was and was not staged. Firstly, I believe that this photograph was staged because compared to the second image, a real person that gets shot won’t fall like that. The impact of the bullet will be too strong to cause a person to react in that way. But then again, everyone will react differently to getting shot. Depending on a slightly different angle the bullet comes from. Maybe the photograph wasn’t staged, but there is not any valid proof that is was except the reaction of the soldier while being shot. This image could have been taken as soon as the bullet hit him, explaining why the posture of the soldier was so open and outward. In addition to proving that this image is not staged, there was no proof of Capa telling anyone that this image was staged.

Authenticity does matter. If an image is authentic the image is genuine. Genuine images attract people. People begin to be filled with emotions to react to these images. Capa’s image is authentic because someone is dying, and this was not staged at all.

After reading “Richard Whelan’s discussion of Capa’s photograph” I definitely find his arguments convincing. His use of evidence and engagement was convincing as well. Carefully analyzing his photograph, I don’t think his photo was staged. The man’s body position looks realistic as his back arch with the impact of the shot into his body. In addition, the motion of the man’s arm/hand is revealed by how he is letting go of his gun. I definitely believe that its authenticity matters because the image is so real. It looks real! Therefore, it wouldn’t be questioned by many. This image reminds me of the image that showed a soldier left in between rocks. Both of the images portrait exactly what war is really about. However, the image of that soldier was staged to catch a crowds attention. It was a dead body that had absolutely no motion. On the other hand, Capa’s photograph shows the motion as it took place. He clearly captured the image at the right time. The image was able to show each move as the body collapsed and unfortunately dies. The gun falling and making an impact, all helps the audience prove that the image was not staged.

This photo looks like it’s been staged because I think if he gets shot, he should be falling down straight instead of butt facing the ground. However, I did change my mind after I read the article whereas O.D. Gllagher and Bill Mauldin both provided evidence to prove that Capa purposely staged the the photograph but later both of their evidence to be proven fake. Gllagher did not share a room with Capa and the photograph Maulin recognized was by George SIlk.

Also, I don’t think you would be able to have that much time to stage a photograph in battlefield. It was a period of war, if they wanted to stage a photo they did not have to go to a battlefield. They could have done it somewhere with a similar background, not having their life risked under flying bullets.

I think authenticity does matter, because when viewers are getting information from the photo they expected the information to be true and real. If the photo is fake, then what is the point of spending time to look at something that is unreal. But, sometimes a staged photograph is only meant to make the photo more convincing, it might have been staged but doesn’t mean it is not authentic.

I determined the photo Falling Solider by Robert Capa is authentic. I examined in the photography, the aliment of the falling solider legs, arms and position of the gun. From what I can see within the photo the gun seem as though it is actually sliding out of the soldiers hand and the jerking motion of his body suspended in practically off the ground. It is pretty difficult to reenact a position of that nature and even believe Capa maybe able to capture such a moment within a split second of a flick of his camera. For example, “Cape was about to flick hid camera, a hidden enemy started to open fire and Borrell was hit and died instantly and went limp while still on his feet.” This very important detailed surfaced through the evidence Richard Whelan discovered during his research. My impression, of Capa’s photograph leads me to believe that it is real because their isn’t enough time to capture such an iconic such as what Capa displayed. The purpose of photography is to pursue the audience of a moment that was capture through another person view and with that being said I consider that Capa was able to obtain that point in time though the Falling Solider.

I personally don’t believe that Capa’s photo was staged due to a few things. One, the way his legs are positioned doesn’t seem as if that was something that could be positioned that way. Another thing is that it looks as if the gun is flying out of his hand, it would be kind of hard to get a shot of a gun like that unless the photographer took their time to do that. Even though Gardner’s photo “Home of a Rebel Sharpshooter” was staged, in Capa’s photo there are many differences that showed why his photo actually happened the way it is photographed. The main difference between the two photos is, once agin, the gun. In Gardner’s phot the gun is placed nicely on the wall. Furthermore, in Whelan’s article , one thing that he mentioned that really caught my attention was when Gallagher claimed to be with Capa at a hotel and that he heard him calling for people to help him stage the photo, but then all of a sudden he claimed that he had Capa mixed up. Another point that caught my attention was when Whelan stated that he was able to prove that Capa was at that exact point to capture the photo of The Falling Soldier. Authenticity definitely matters when it comes to photographs taken during war and photographs in general because they can be used as evidence.

When I first saw the image before reading the article, I thought the image was staged because of the gesture of the falling soldier. The way he was falling, the legs seemed to be unusual. I’ve not yet seen anyone falling in such a gesture with his thighs almost parallel to the ground. The way he was falling onto the ground gave me feeling of someone who is scared of falling trying to fall on his butt.

However, after reading the article, the writer convinced me a little, especially with the conversation with Capt. Franks about how the fingers of the falling soldier were placed on the left thigh, “the fingers are somewhat curled toward the palm clearly indicates that the man’s muscles have gone limp and that he is already dead.” This explanation seemed to be biological which is powerful than people’s guesses and interpretations.

I felt like authenticity does matter, but what can we call to be authentic. These images seemed to be more powerful and convincing when staged which designed gestures. But these people and places in the photo are who they are, those are facts. Photographers staged their photos so that they created a stronger message which was their main purpose. If you look at the photos in such aspect, the photos would be more acceptable.

Despite the multiple arguments within Richard Whelen’s article, I believe that the photograph of the falling soldier by Robert Capa is overall authentic and not staged. The argument behind whether or not this photograph was staged or not is a very important one as this photograph ultimately became the first photograph to capture the death of a man during a war. Overall, just by looking at the position of the man within the photograph it is very hard to maintain the position he was in with a sitting position falling down and also like Captain Robert L. Frank stated in his conversation with Whelen, it is hard for a man to know how to curl his fingers like he was in the photograph consciously. A photograph Robert Capa’s photograph can be compared to is Alex Gardner’s Home of a Rebel Sharpshooter in which it was fairly clearly staged. In the photograph Gardner left many notable signs that it was staged such as the positioning of gun against the rocks and the orientation of the soldier facing the viewer. In comparison, Capa’s photograph on the other hand still leaves a lot to be answered when looking at the possibilities of it being staged as unlike Gardner’s photograph ultimately left controversial evidence of it being staged as a lot of these things would be very hard to recreate.

I think the photo Falling Soldier by Robert Capa is real. From what I can see, the angle of the man’s legs are off-balanced. It will be hard for the man to maintain that position and wait for Capa to take the photo without the help of props. Furthermore, even if the falling is real, like what Captain Robert L. Frank said in Robert Whelan’s article, “It is nearly impossible for any conscious person to resist the reflex impulse to brace his fall by flexing his hand strongly backward at the wrist and extending his fingers out straight.” The feeling of being off balance and falling will jolt reflexes and impulses to help prevent or to minimize the pain upon impact. Another example of reflex is when people suddenly and out of nowhere hears an explosive sound, their heart are bound to beat faster and their muscles will tighten as the “fight or flight” instinct kicked in. Personally, I feel that the issue about whether Falling Soldier is staged or not varies according to the different lenses and criteria. If the goal of the photo is to show real events, then Capa’s photo’s authenticity matters. However, if it is to show the experience of war, then it does not matter whether Capa’s photo is staged or not, because the goal is to educate people about something. 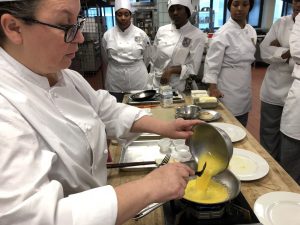 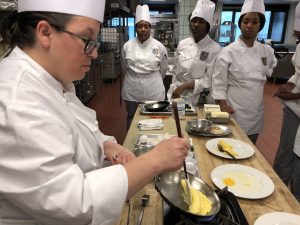 Professor Zimmerman showing us the technique to fold an omelet. 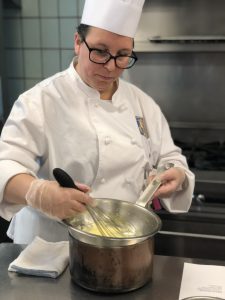 Chef is making one of the mother sauces… Hollandaise! 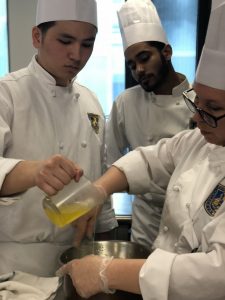 BiQing helping chef pour on the liquid butter slowly to incorporate into the Hollandaise sauce. 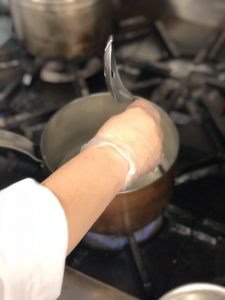 Chef Z is showing us how to make poached eggs, and using the back of a spotted spoon to make a mini whirlpool in the water, so the eggs form a stable round shape. 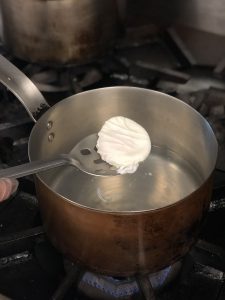 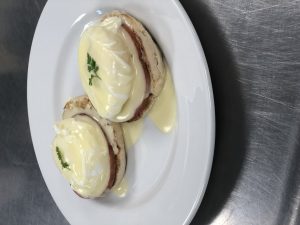 Combine all of them…. and you get Egg’s Benedict! 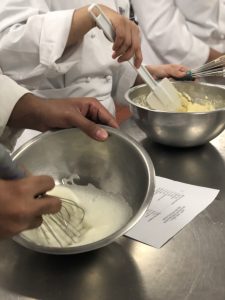 Making the egg white foam mixture to incorporate in the waffle batter! 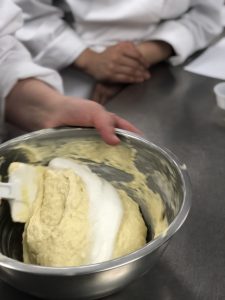 Using the folding technique to mix the egg white mixture into the waffle batter in order to create fluffiness! 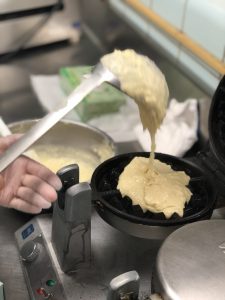 Pour the batter in the waffle maker…. 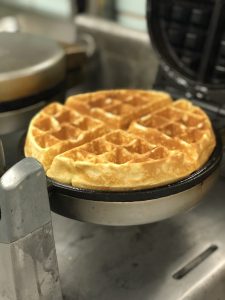 AND VÓILA!!! A Waffle is born! 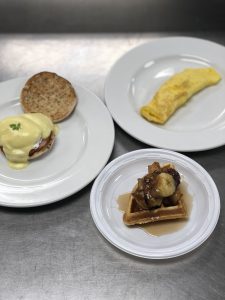