In Baking and Pastry Arts 1 we had the opportunity to make Onion Rolls and  Herbed French Bread for the dining room as well as for ourselves. With only 8 students in class we all hustled and stayed focused to get the job done. All the breads came out wonderful and on time to be served. Some of the trigger ingredients were: gluten, soy, eggs, onions, poppy seeds and Parmesan cheese. During the bread process we were also in charge of making 4 Vanilla Genoise’s which is also known as a sponge cake for our upcoming Final practical. If I were to own my own bakery I would definitely have these two breads there due to the fact that they would go good with a nice Italian dish. My favorite item made was the onion rolls because of my love for them. All in all, this production day went very smooth and I was proud of all the hard work that was put in and the products we made. 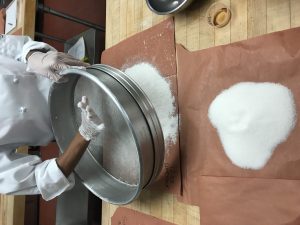 Student sifting dry ingredients (besides sugar) for the Vanilla Genoise 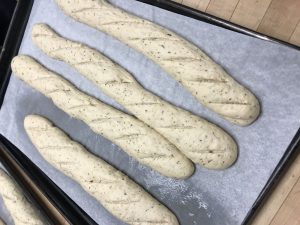 Herbed French Bread prepped for baking after being in the proof box. 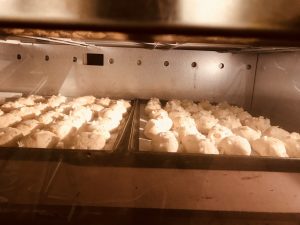 Onion Rolls in the oven 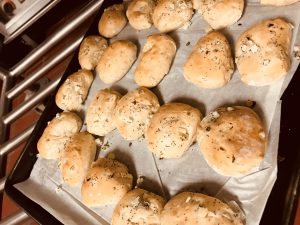 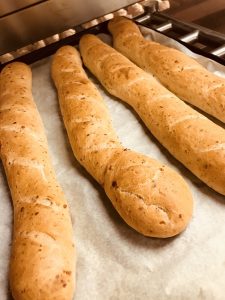 I personally don’t believe that Capa’s photo was staged due to a few things. One, the way his legs are positioned doesn’t seem as if that was something that could be positioned that way. Another thing is that it looks as if the gun is flying out of his hand, it would be kind of hard to get a shot of a gun like that unless the photographer took their time to do that. Even though Gardner’s photo “Home of a Rebel Sharpshooter” was staged, in Capa’s photo there are many differences that showed why his photo actually happened the way it is photographed. The main difference between the two photos is, once agin, the gun. In Gardner’s phot the gun is placed nicely on the wall. Furthermore, in Whelan’s article , one thing that he mentioned that really caught my attention was when Gallagher claimed to be with Capa at a hotel and that he heard him calling for people to help him stage the photo, but then all of a sudden he claimed that he had Capa mixed up. Another point that caught my attention was when Whelan stated that he was able to prove that Capa was at that exact point to capture the photo of The Falling Soldier. Authenticity definitely matters when it comes to photographs taken during war and photographs in general because they can be used as evidence.

Social media has become one of the major factors within the food industry. Wether it be drinks, finger foods, ice cream, or food, social media has now been able to get up and coming businesses and even businesses that have been around for years,more business than ever due to many social media users posting their items on there accounts. While reading “How A New York Restaurant Uses Instagram Influencers To Drive Sales,” the main thing that caught my attention out of the article was that, “influencers will be more invested and will deliver better-quality posts if they believe in you, rather than just being paid by you.” I agree with that statement 100%. I rather post something and invite my friends and family to a place where I know they’ll get their money’s worth, rather than have them waste their money on something that has no type of taste or appealing appearance.

Personally, I always take photos of my food especially when I go out to a new place. The main reason being, they way they set the item up may have automatically caught my attention as soon as I got it. Sometimes I’ll take a picture so that if after my meal, if I enjoyed it, I can give positive feedback on my social media and hopefully gain them some new customers.