I believe that Capa’s photograph of the falling soldier was and was not staged. Firstly, I believe that this photograph was staged because compared to the second image, a real person that gets shot won’t fall like that. The impact of the bullet will be too strong to cause a person to react in that way. But then again, everyone will react differently to getting shot. Depending on a slightly different angle the bullet comes from. Maybe the photograph wasn’t staged, but there is not any valid proof that is was except the reaction of the soldier while being shot. This image could have been taken as soon as the bullet hit him, explaining why the posture of the soldier was so open and outward. In addition to proving that this image is not staged, there was no proof of Capa telling anyone that this image was staged.

Authenticity does matter. If an image is authentic the image is genuine. Genuine images attract people. People begin to be filled with emotions to react to these images. Capa’s image is authentic because someone is dying, and this was not staged at all.

I determined the photo Falling Solider by Robert Capa is authentic. I examined in the photography, the aliment of the falling solider legs, arms and position of the gun. From what I can see within the photo the gun seem as though it is actually sliding out of the soldiers hand and the jerking motion of his body suspended in practically off the ground. It is pretty difficult to reenact a position of that nature and even believe Capa maybe able to capture such a moment within a split second of a flick of his camera. For example, “Cape was about to flick hid camera, a hidden enemy started to open fire and Borrell was hit and died instantly and went limp while still on his feet.” This very important detailed surfaced through the evidence Richard Whelan discovered during his research. My impression, of Capa’s photograph leads me to believe that it is real because their isn’t enough time to capture such an iconic such as what Capa displayed. The purpose of photography is to pursue the audience of a moment that was capture through another person view and with that being said I consider that Capa was able to obtain that point in time though the Falling Solider.

It was a universal occurrence during the Spanish Civil War for photographs to be staged; because they did not have any freedom of movement and also unable to go to active fronts, , photographers resorted to pictures of soldiers feigning combat. Capa asserted that the photograph was taken at the battle site of Cerro Muriano, but research suggests it was taken in the town of Espejo,30 miles away. I think the photograph was staged because someone being shot would be in more pain and agony and would be in a agonizing posture falling to the ground. His facial expression was not dramatic as he had seen been in danger , This controversial arguments is in comparison to  Home Of The Rebel Sharpshooter by Matthew Brady which was also a photo taken in during war periods, which a dead solider rifles sits neatly beside him.In my perspective, those times I would not consider authenticity to matter because photographer did not have the tools and resources we have now to present certain type of photographs to the public and giving credit to them , they made the effort for people to have an understanding of what was happening during war by using these photos whether staged or real. 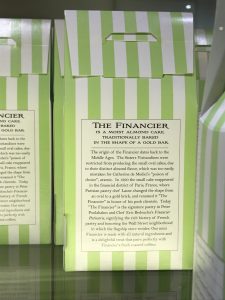 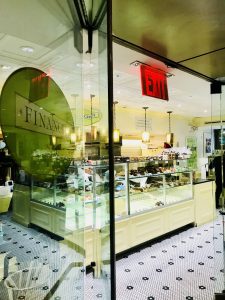 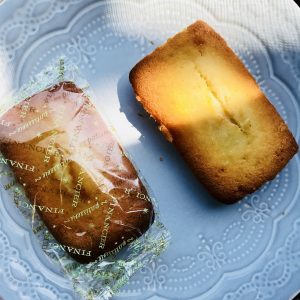 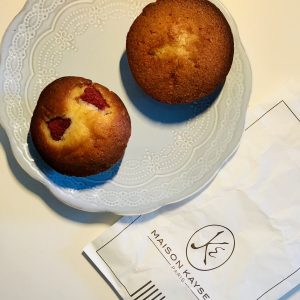 Financier Patisserie first opened in the lower Manhattan near the stock market neighborhood. Named after the French Financier cake that originally was created for Financiers since they were very simple and easy to eat. Some Financiers didn’t have time for lunch so this little cake was perfect to for them to enjoy during working hours since they didn’t have any filling or topping that would leave their hands messy and sticky. At Financier Patisserie these cakes are sold individually and wrapped in plastic bags. They taste like almonds and butter, not too sweet and medium moisture! Delicious! They only cost $1.85.

Mayson Kayser also sells Financiers but they have a muffin-like shape, they come in plain, pistachio, raspberry and cherry flavors. They are very sweet, the dough tastes like almond paste and they have a lot of moisture. They are good but I prefer the Financiers at Financier Patisserie. The cost at Kayser is $5.35 which is I think is a little too expensive. One aspect I liked from Kayser is that they have a cozy and beautiful interior and the service is always on point. 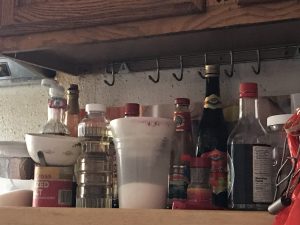 The things on kitchen counter. I’m from an Asian background, so other than the basic things like oil, sugar, salt, and MSG, there are bottles of different types of sauces. Some of the sauces are soy sauce, fish sauce, and oyster sauce. To make things convenient and efficient, these flavoring and seasonings are placed next to the stove. 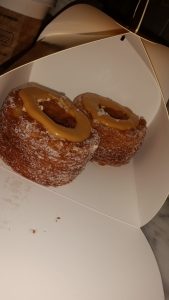 The Dominique Ansel Bakery located in Lower Manhattan has been making batches of this doughnut and croissant fusion filled with a filling of the week, this one in particular was salted caramel. All the works of a doughnut, but the flakiness, texture, and layers of a croissant filled in with a creamy salted caramel filling in between each layer and a nice amount of granulated salt. It was sweet, soft, and moist and all of this put in a box. The line to get a box of two croughnuts wraps around the corner of Spring street and Thompson street, people would line up an hour before opening to get their hands on a small box of croughnuts. 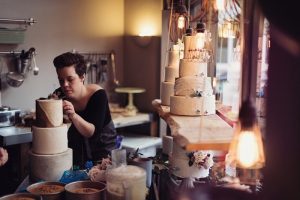 In this picture composition it speaks alot as you can identify the professionalism and neatness of this baker or cake designer. The person illustrated in this photo her dedication to careful time,effort and incorporated design of the cake which depicts the end product. In the background captured by the photographer she looks as if she works for a bakery that specialize in maybe wedding cakes and their end product is really what matter the most .She also looks organized based on the tools in the background. Looking closer you can also see other types of cake made presumingly by the same person. Her pose with this cake tells alot such as professionalism, very detailed individual, neat, organized and passionated about cakes in general. 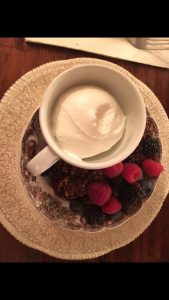 This is a Greek yogurt served alongside granola and a combination of blueberries and raspberries. The texture of the yogurt is very thick and viscous similar to the texture of whipped cream. The granola provides a rough texture due to the dryness of the oats and is also rough due to the clumping of multiple pieces. The raspberries on the plate are firm on the outside and squishy the harder you pinch the berry. There are also little bits of furry bristles on the outside skin of the berry that feels like a gentle brush like feel to the berry. The blueberries are similar to the texture of the raspberries, but without the feel of the bristles on the outside. Instead there is just a smooth firm outer layer protecting squishy insides of the berry. Together the parfait creates a mixture of mouth feel textures mixing of textures where biting into granola helps create a crunch while everything else provides a smoother melt in your mouth type feel. 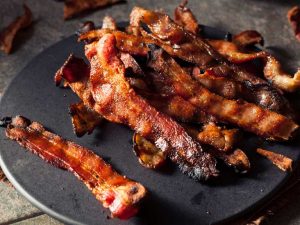 There are few foods as sensual and appealing as bacon. The mere smell of it can take you by the nose and lead you across the house to the kitchen. It vaults anything from eggs to chocolate to Brussels sprouts to new levels of deliciousness.Bacon is from the pig belly, which is part of the loin. Fresh pig belly can be cooked in a variety of ways.When most people talk about bacon, they tend to talk more about its texture than its flavor. The usual adjectives used to describe bacon are crispy and chewy, salty and savory. Smoky is often mentioned, but rarely is bacon described as sweet.From the very first bite, texture and chewing play crucial roles in how much we enjoy food.The taste of bacon breaking down into their delicious combination of sweet, nutty, grassy and buttery flavors, but we also love the textural interplay known as mouthfeel.In short, it’s all about mouthfeel the natural synthesis that happens when we simultaneously taste, chew and experience a food’s texture. It’s that melt in your mouth ecstasy we experience when eating the perfect bite.