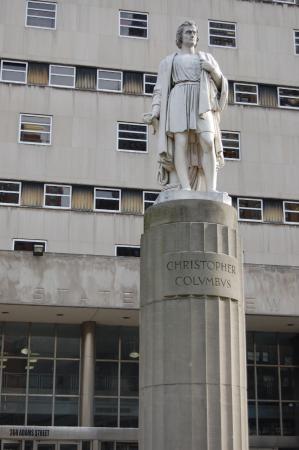 While I was walking to my school I found Christopher Columbus  statue. The monument at this one in front of the Kings County Supreme Court , created by Italian sculptor Gaetano Russo, was erected as part of New York’s 1892, the sculpture was a gift to the city in 1892, paid for by public subscription. The funds were collected in 1892, but the sculpture was not installed until two years later. It is a copy of a work located in Madrid.  The monument consists of a marble statue of Columbus atop a 70-foot (21 m) granite rostral column  decorated with bronze  reliefs representing Columbus’ ships.

This sculpture has been described as representing the navigator “standing upon the deck of a ship alone…before the West Continent burst into view,” ship’s tiller in hand, as his “mutinous crew have all deserted him.” Emma Stubbiness (1815–1882) carved this colossal marble sculpture in the late 1860s. She was one of several female expatriate artists living in Rome at the time whom author Henry James dubbed “the white marmorean flock.” The sister of Park Board President Henry Stubbiness, she is best known for creating the bronze statue of the Angel of the Waters at the center of Central Park’s Bethesda Fountain. 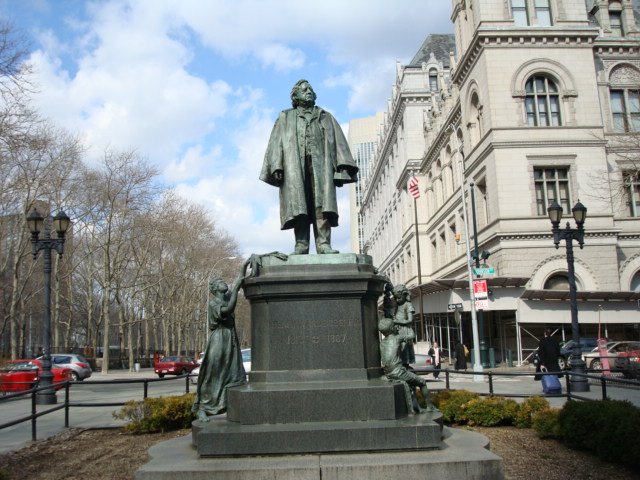 While I walking to my school I saw this statue of Beecher sits in Columbus Park in front of Brooklyn Borough Hall. Beecher was born on June 13, 1813 in Litchfield, Connecticut, and was the son of a well-known Presbyterian minister, Lyman Beecher (1775–1863). Among Henry Ward’s ten siblings was his sister Harriet Beecher Stowe (1811–1896), author of the classic anti-slavery novel, Uncle Tom’s Cabin first published as a serial in 1851–52. The figure was designed by John Quincy Adams Ward he is the best known for his George Washington in front of Federal Hall and dedicated in 1891, just four years after Beecher’s death.

Later referred to as “the Dean of American Sculptors,” Ward contributed nine sculptures to the parks of New York, among them Horace Greeley (1890) now in City Hall Park,  he was chosen to make Beecher’s death mask, and then selected by the memorial committee to sculpt his full-scale bronze effigy. In 1847 Beecher took charge of the newly formed Plymouth Congregational Church in Brooklyn Heights.  Beecher was an inspirational spiritual leader, and an outspoken and eloquent commentator on issues of the day, opposing slavery and supporting women’s suffrage, and through his sermons, lectures and writings attained broad influence on popular opinion. 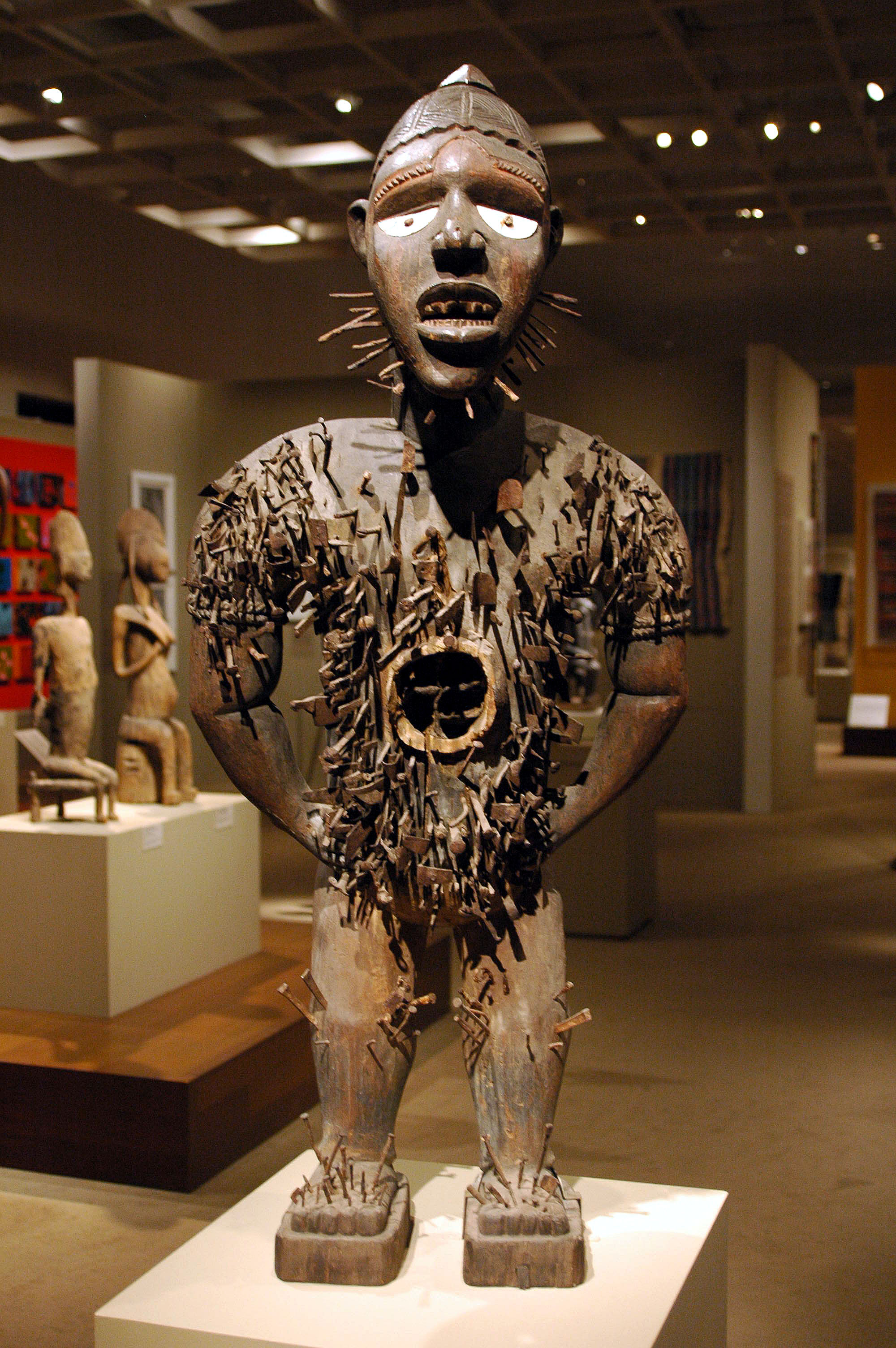 While we went to a trip to the Metropolitan museum of art this May 6, 2017, This one is one of the statue that I found interesting too, it’s the Kongo Power that , this statue were the creations of sculptors who contributed the figurative receptacle and ritual specialist responsible for its consecration with customized sacra. This work is among the most monumental examples thats served to invoke the preeminent force of jurisprudence, known as Mangaaka. Mangaaka was designed to inspire awe and respect for local authority and rule of law.

The figure’s posture and gesture, leaning forward with hands placed akimbo its hips. was seen as the assertive attitude of one who challenges fearlessly, It’s crowing element is the distinctive mpu headdress worm by chiefs or priests. The power pack in the stomach was deliberately emptied by its original owners in order to disempower or desacralize the work before it left the community. When in use, this figure featured a beard composed of plant matter affixed with metal around the perimeter of the chin and  a raffia skirt that extended to the feet.  The accumulation of metal addictions to the surfaces reflects this work’s use during myriad consultations.

While we went to a trip to the Metropolitan museum of art this May 6, 2017, some of the statue that I found interesting was the first statue when we entry to the museum. This status is the Marble statue of Athena Parthenos, Greek Hellenistic period, c,a 170 after the mid 5th century , chryselephantine cult statue of Athena Parthenos by Pheidias in Athens. The cult statue of Athena in the Parthenonn at Athens was still standing while the Hellenistic kingdom of Pergamon was flourishing. Moreover, the ties between the two centers were extensive.

The Athena here, presented as the goddess of knowledge and the arts, dominated Pergamons famous library. The image is smaller and shows modifications that because of its fragments condition, can only partly be identified as deliberate. The Pergamene statue lacks the sphinx, winged horses and other attributes of the original Athena’s helmet, as well as the protective snake curled within her shield. The back of the Pergamene statue is cursorily carved and only one block of its base survives. It preserves part of the relief that decorated the base of Pheidias’s statue and illustrated the birth of Pandora, the creation myth of the first woman on earth, all endowed by the gods as her name suggests. The Attalid kings admired Classical painting and sculpture, and this impressive Athena is the best-known example of Pergamene Classicism.

While I was walking around  there is this image statutes in New York  called Charging Bull, which is sometimes referred to as the Wall Street Bull or the Bowling Green Bull,  is a bronze sculpture that stands in Bowling Green in the Financial District  in Manhattan New York City. Originally guerrilla art  installed unofficially by Arturo Di Modica  its popularity led to it being a permanent feature. The 7,100-pound 3,200 kg sculpture stands 11 feet 3.4 m tall and measures 16 feet 4.9 m long. The oversize sculpture depicts a bull, the symbol of aggressive financial optimism and prosperity leaning back on its haunches and with its head lowered as if ready to charge. The sculpture is both a popular tourist destination which draws thousands of people a day, as well as “one of the most iconic images of New York”

The bronze color and hard, metallic texture of the sculpture’s surface emphasizes the brute force of the creature. The work was designed and placed so that viewers could walk around it, which also suggests the creature’s own movement is unrestricted a point reinforced by the twisting posture of the bull’s body, according to Durante.Charging Bull, then, shows an aggressive or even belligerent force on the move, but unpredictably. It’s not far-fetched to say the theme is the energy, strength, and unpredictability of the stock market, The sculpture technically has a temporary permit allowing it to stand on city property since the city does not own the sculpture, but the temporary permission has lasted since 1989, when city officials said the new location would not be permanent.

This picture of this officer really called my attention in one of those day when I went to the NYPD Police Plaza. There are a number of these huge plaques on the wall inside the lobby of 1 Police plaza that statutes represent of honoring the men and women who have lost their lives while performing their duty.  Each one of those names representing the tragic loss of someone who was loved by their friends and living their families. In the middle plaque below, 2nd row from the right, 3rd from the bottom, the 22-year old officer Edward  Byrne who was shot and killed in 1988 and whose death was huge national news.

Each one of those deaths were just as tragic and these plaques are a sobering reminder of just how dangerous their jobs can be, and it’s something sad because as one of the police officer they go to out to serve the community not to be killed, they just want to make the society a better place so that people can live without fear and being afraid to go out during the night etc. They create that image because they can’t do nothing else for all those officer who died just serving the society and trying to make when people live a better place for all.

While I was taking my  A train I saw this interesting status it’s located in 14th St./Eighth Ave. station, over there they have  amount of little status where each of that one represent something interesting, especially  the underground gators along with dozens of other whimsical creatures are part of the permanent art installation housed at the intersection of the A,C,E, and L lines.  This is  a the political cartoon-inspired project was commissioned in the 90s along with the station’s renovation when the start the station they put those status. A certain percentage of each renovation budget is dedicated to permanent art for the station  and in this case that sum came out to $200,000. Another interesting status located 14th St./Eighth Ave is this crawling out of manhole cover and hauling off a moneybag headed figure into the netherworld.  Some of the works are inspired by urban legends, where it said  “I finished a lot of the original work in five years but the renovation took ten years so I had a chance to show them aboveground in a few places.” One of those places was the Doris Freedman Plaza at the corner of Central Park, Though the aboveground displays went up in the mid-90s, underground installation didn’t begin until 2001 and was completed in 2004.

I live uptown Manhattan  this monument is located in Broadway and St. Nicholas Avenue, between 167th and 168th Streets. This is a representative monument of Manhattan of these three man where was this impressive monument stands at the apex of Mitchell Square, the memorial’s central image, was created by the esteemed sculptor and art patron Gertrude Vanderbilt Whitney who was born on the 1875 and died in 1942. The meanings of this status is a three figure group in bronze depicting two soldiers, one kneeling and one standing, who support a third slumping comrade in battle. This monument was dedicated on May 30, 1922 to honors those men from the adjacent communities in northern Manhattan of Washington Heights and Inward who gave their lives while serving their country in World War I.

The parkland is named for John Perry Mitchell (1879–1918), a reform mayor, and also the youngest in New York City’s history, who was killed during a flight training accident in World War I. In 1998 the monument was fully restored, and a long-missing bayonet replicated, as part of an overall renovation to the park funded by Council Member Guillermo Linares included landscaping and the installation of a black wrought-iron fence and new benches. In 1999, the sculpture and base of the war memorial were cleaned, the patina replaced, protective coating applied, and a damaged bayonet was restored. Theodore Roosevelt (1858-1919), 26th President of the United States, wrote of this park’s namesake, “No stauncher American, no abler and more disinterested public servant, and no finer natural soldier than Perry Mitchell was to be found in all our country.”