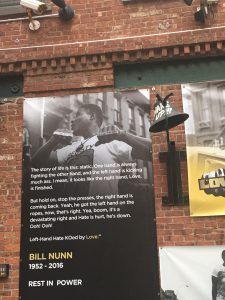 While walking down the block in my neighborhood, I noticed a sign that read, “Rest in Power”. It struck me because normally people would say Rest in Peace. I knew it had to be someone special because it was posted at the office of film director, actor, producer and writer Spike Lee. He always makes signs that recognize people that are loved and lost. This time it was about the recent death of Bill Nunn, whose battle with leukemia ended in September. It is a disease that causes the body to be unable to fight off infection. It can affect the bone marrow and the heart. Mr. Nunn died at the age of 63 and he leaves a wife and two children. I was unable to find a will but if he died without a will his estate will be handled under the laws of intestacy we know that his wife will get the first $50,000 plus ½ of everything left behind. Bill Nun was an actor and his estate is a little over one million dollars.

The spike lee movie that Bill Nunn acted in is “ Do the right thing” he played the character by the name of Radio Raheem. This movie was set in Bed-Stuy Brooklyn in the 90’s, in the summer heat and it followed the lives of the black community. Mr. Nun roll in the film was symbolic to me because his gold rings that read Love and Hate. Which is what we are facing in the world today. The difference between real life and movie is that the director cannot say cut if someone says or does something hateful. The film taught everyone to always do the right thing and as Mr. Nunn/ Radio Raheem carried around the radio in the movie. He played truth lyrics by conscious rappers who made sure that the community looked beyond there everyday lives to the future.

Sadden by the death of this actor; we know that he was also a man that had to live in this world and deal with life after the cameras stopped rolling. So he received an education by graduating from Morehouse College in Atlanta, all male Historical Black College, while there he worked with students at Spelman College in the arts of acting. Then he later formed a project, called Bill Nunn Theatre Outreach Project to help public school students learn the arts profession. Students were able to win scholarship money for college and help build self- esteem to those who don’t always have a father figure. I’m sure his presence will be missed on stage, in movies and mostly in the live of his wife, children and close friends.

Rest in Power, praying that love will cover up hate as we live the rest of this life without you. 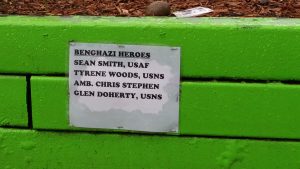 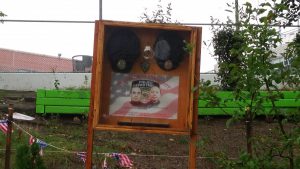 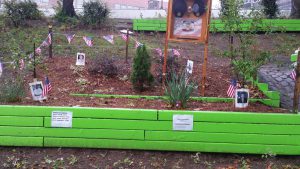 This beautiful little display that looks like a garden is located at the Doughboy Park in Woodside, Queens.  There is an arrangement that looks like a garden with little flags and pictures for each fallen Benghazi heroes along with a plaque holding the pictures of two on-duty NYPD Officers Rafael Ramos and Wenjian Liu who were killed as a revenge for the death of Eric Garner and the shooting of Michael Brown.

The first Benghazi attack was on September 11, 2012 by members of Ansar al-Sharia resulting in the attack  of “…American diplomatic compound in Benghazi resulting in the deaths of U.S. Ambassador to Libya J. Christopher Stevens and U.S. Foreign Service Information Management Officer Sean Smith.  On September 12, 2012, the group launched a mortar attack against a CIA annex approximately one mile away, killing CIA contractors Tyrone S. Woods and Glen Doherty and wounding ten others.”

When I first saw this it caught my heart, I felt saddened to know that these heroes and officers died in such an unjust way.  Officer Ramos and Liu were just doing their job and had no connection with the incidents that happened with Eric Garner and Michael Brown.  The attack towards the American diplomatic compound and CIA annex was wrong.  By having this little place as commemoration to remember them by gives a sense of peace and honor for these wonderful individuals.  May they rest in peace! 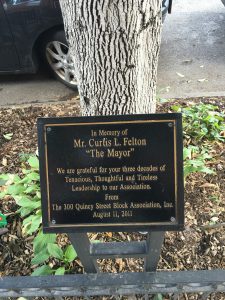 I found this small memory of Mr. Felton in Brooklyn, New York in the area of Bedford Stuyvesant from the 300 Block Association, he was someone that was held in high regard while living on this block since 1963. He was a member of the block association for 15 years and he was linked with the 79th police precinct. He believed in working with the police department to help control crime in the Bed-Stuy. In this area of Brooklyn working with the police department has become a way of life. While walking around these blocks I noticed a lot of friendly exchanged between the police officers that walk the streets and the homeowners outside early weekend morning sweeping there front yards. I can’t help but to think that this relationship started way before I ever walked these streets. I feel grateful for Mr. Felton from creating a better sense of community between two forces of homeowners and the police department. Now at these meeting his sense of community is still apart of the monthly meeting, the police officers attend the meeting and give us guidelines and insure that they are here to help in anyway that they can. 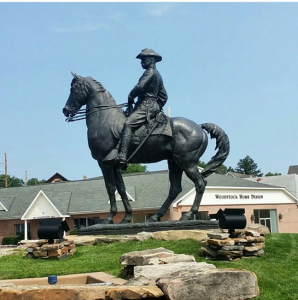 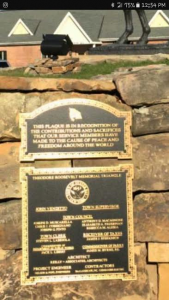 This beautiful Theodore Roosevelt Rough Rider Statue is located in Oyster Bay, New York. Theodore Roosevelt is on a horse which stands on a plate.   It was dedicated on October 29, 2005 for the Centennial Project of the Rotary Club.  The sculptor was named Alexander Phimister Proctor.

I loved the way the president was placed on top of one of the things he loved the most his “horses”.  He was a rancher and his family loved horseback riding.  When President Roosevelt was in the White House, he gave invitations to have guests ride along with him.   Such a great President!