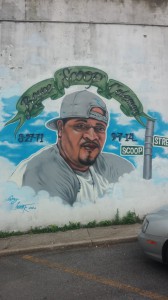 Boyce “Scoop” Coleman has been memorialized for performing an act of heroism that resulted in the rescue of a drowning young boy, and unfortunately, Scoop’s demise.  On Sunday September 7, 2014, Scoop was attending an annual BBQ that present and former School Street residents hold at the John F. Kennedy Marina, in Yonkers, NY.  It’s like a yearly reunion that ends the barbequing season and doubles as a neighborhood reunion.  Since it’s a family oriented event, there were children everywhere involved with the activities.  One mother became separated from her mildly autistic, 6-year old son, who just so happened to be fascinated by water.  The woman caught sight of her son struggling in the waters of the Hudson River and began to yell for help.  Scoop, an experienced swimmer, was one of two men that immediately responded to the woman’s call (although several other people also attempted the rescue once they realized what was occurring).  Scoop made it to the little boy before anyone else, and saw that the child was being pulled by the undertow.  Scoop was able to grab hold of the 6-year old over and safely hand him to a woman who happened to be a life guard.  This was occurring simultaneously as the same undertow pulled at [Scoop], and then finally took him under.  Scoop’s swift reaction was described as “an act of bravery” in the media and by Mayor Mike Spano, of Yonkers, who spoke at the wake.  Scoop’s story was actually noted and broadcasted on the major & local news networks, news radio and both local and NYC newspapers.

Because my family and Scoop’s family have a history – our families attended the same church when I was younger – his death definitely touched me since he is someone that I know personally, even though I had not had any contact with him in many years.  It turns out that he is my boyfriend’s [third] cousin, on his mother’s side.  My boyfriend described his cousin as “a good dude” that would offer help to those in need.  My boyfriend also commented on what a great sense of humor Scoop had.  A few weeks, maybe a month or so before Scoop’s death, my brother said that he ran into him, but he did not recognize [Scoop] at first because he was so much bigger (muscular) than when they were younger.  But once Scoop identified himself, my brother remembered him, and they reminisced about, among other things, a camping trip that they went on as children (along with my current boyfriend, another boy, and about 6 other cousins).  My brother told me how they laughed about that childhood experience.  Whalen and Ball Funeral Home’s obituary read that “[Scoop] was known for his bigger than life personality, tremendous generosity, and warm heart.  On the day that he surrendered his life to save another, he truly demonstrated the characteristics that made him who he was.”   Mourners proved Whalen and Ball’s post to be true as 100s of people came to pay their respects to Scoop, patiently waiting on lines that extended outside of the funeral home and around the corner for each of the two viewings. 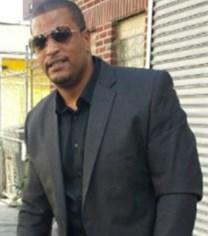 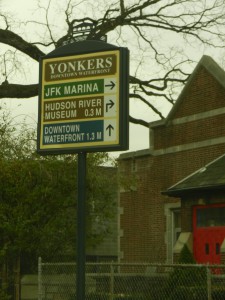 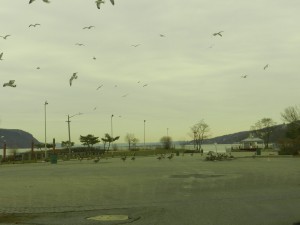 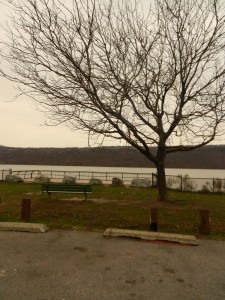 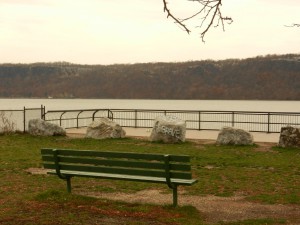 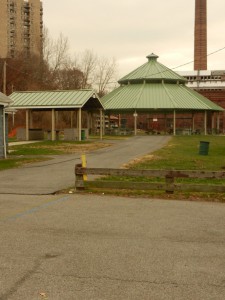 The marina memorializes our 35th president, John F. Kennedy, who was the nation’s youngest nominated president.  President Kennedy was assassinated, in November 1963.  Notable events that occurred during former President Kennedy’s administration are:  the Bay of Pigs Invasion, the Cuban Missile Crisis, initiating space travel program in America, the building of the Berlin Wall, increased U.S. involvement in the Vietnam War, and the Civil Rights Movement.

I was not able to find out when or why the City of Yonkers named the marina after the former president.  But I can say that it is a very tranquil place to spend a sunny day.  You can see New York City from the marina when you are facing south and The Palisades when you are facing west, looking across the Hudson River.  The gazebo, which houses grills, tables and seats, and the restrooms were added within the last 10 years as part of a renovation project, which also included repairing the launching dock. 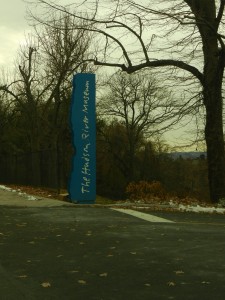 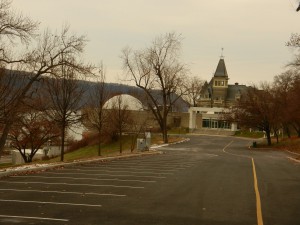 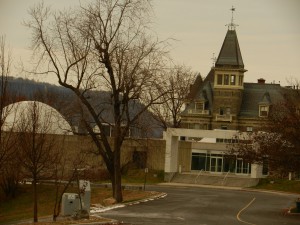 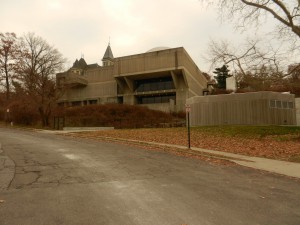 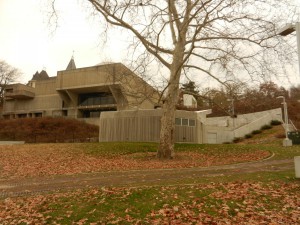 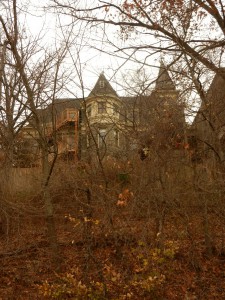 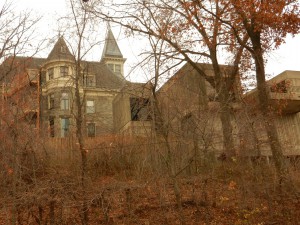 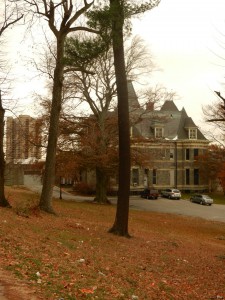 Warburton Avenue side of The Hudson River Museum 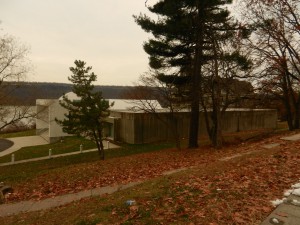 The Hudson River Museum is the largest museum in Westchester County.  The museum was named after the river that it overlooks, which was named after Henry Hudson, an English explorer, who was commissioned by the Dutch East India Company to find safe, ice-free passage to Asia.  In 1609 he “discovered” the river later named “Hudson River” during his third voyage to North America.

The older of the buildings holds historic exhibits, while the concrete building holds more current exhibits, the planetarium, and is connected to the amphitheater.  When I was a child my elementary school had trips to the museum for magic shows, puppet shows, arts and crafts, and planetarium tours.  As a child it was surreal to walk inside of the planetarium because you felt as though you were in outer space, amongst the stars and planets.  The Hudson River Museum remains a great place to see exhibits, and is also headquarters for the Hudson River Community Association (HRCA), a multi-racial, grassroots community organization. 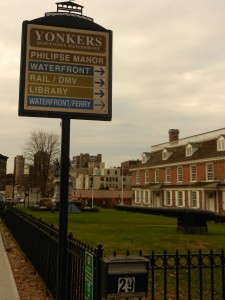 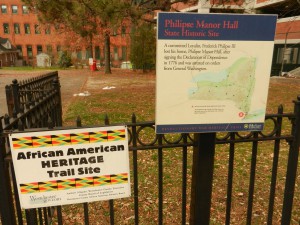 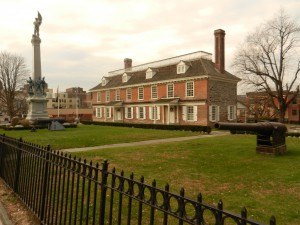 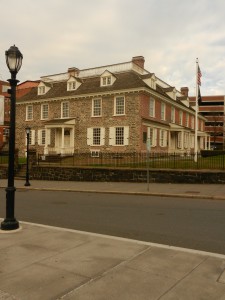 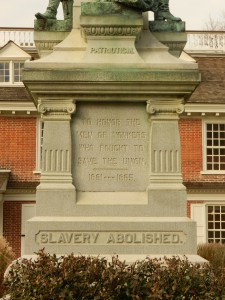 Philipse Manor Hall is a Colonial-era manor house that serves as a museum and archive in downtown Yonkers.  It was constructed around 1682 by Frederick Philipse and his wife Margaret Hardenbroeck.  Philipse was a wealthy Dutchman who became known as one of the greatest landowners in the northeast prior to the Revolutionary War; his property ran along the Hudson River, beginning at Spuyten Duyvil in the Bronx, to the Sleepy Hollow/Tarrytown area in Westchester County. In fact Philipse estate encompassed the entire City of Yonkers. He was a self-made man who began his empire by selling iron nails, and graduated to owning taverns.  By the time he began amassing property, Philipse made his fortune producing wheat products through the grist mills he owned.  Philipse was on the Governor’s Executive Council, until he was banned for participating in slave trading.

Philipse’s family eventually lost the enormous estate because of Philipse’s political affiliation to the Loyalist Party (U.S. citizens that remained loyal to Britain). The current city of Yonkers emerged around what remained of Philipse Manor, the current site of the manor museum.

I toured the museum once and was impressed by the paintings that showed the area prior to the Revolutionary War; it was all river and mills surrounding the manor back then.