My Project is based upon a song called “Express Yourself” by NWA,  the reason why I chose to base my project off this song is because I feel the song is powerful, you should be limitless of your actions be yourself, be free, don’t let people determine who you are.

For my final project I changed the articles about how chocolate is good for diabiates to an article about bicycles. I decided to select an article about bicycles, the articles not only talks about how a helmet can save your life but also about statistic of cyclist that had lost their lives or have been injure in accident. I decided to use this article because I can relate to it, and for my shot maybe I can use my leg that has and injure from a bike accident I had.

For my final project I wanted to pick a topic I connected to personally and like you said “Something that I would be proud to put in my portfolio.” For my first idea I want to take a pair of heels and shoot them on an all black background on plexiglass. A spot light will give the feeling of power and importance to the subject. I want the shoes to give the message of power and maybe even a weapon. I will give this idea a try with a different pairs of heels.

For my second idea I want to use a young lady model in heels, posing in powerful positions while still making the heels the point of focus. I still want to stick with a black back drop and try different lighting. I want dramatic and maybe even a sexy feel. There can be a shot where the model is stepping on a males hand. Feminism is the message and the heel is the key.

For my second final project, my photographs will be based on a magazine article titled, The Toxic Skincare Ingredients Hiding In Your Beauty Products, from Philadelphia Magazine. The blog expresses the potential dangers of chemical ingredients used in daily personal care products. The writer, Lauren McGrath speaks about possible health risks and products that contain such substances. These products are absorbed through skin pores, entering the bloodstream. But why are they still for sale and how are the chemicals helping us? 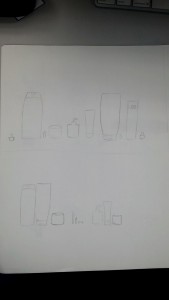 For my first final project, my photographs will be based on a blog titled, Fashion Jewelry is Popular and Economical. The article describes how popular costume jewelry has become and the appreciation of inexpensive jewelry. Costume jewelry is manufactured with base metals and then plated with gold or silver to give an appearance of fine jewelry. Although it may not last for many years, it can be worn countless times for many occasions.

For my shoot, I would like to focus on trendy, designer fashion jewelry. I would like each fashion piece to appear just as luxurious as fine or bridged jewelry. 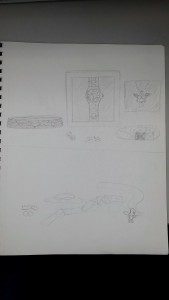 For this final project I am using an article called How music soothes the troubled soul  the article talks about how music helps go through a lot of problems in your daily life, and I believe I can do something.

1. The tone for my project will be serious and eye catching for the topic.
2. For the approach I want to use real people that I can position them in a way to capture the essence of the article.
3. The style of the photograph that I am going to be taking is profile.
4 –
5. This shoot will include anything that can be musically related such as instruments, real people and props.
6. For the shoot I want to have short light for one of them and maybe a broad light for something a little more positive.
7. For the second shoot, I want to make it bright using broad light and sorta show a optimistic mood for how music soothes the troubled soul.

For my final I would like to base my photograph on a Buzzfeed video about “Mom’s talk about their Postpartum depression.” This video was very short but I felt very strong about this case. Postpartum depression for certain mother’s mean to them is the disconnection they have with their baby. In American Psychological Association 1 in 7 mother are affected by Postpartum Depression.  This is a serious problem and I would like to make this case very seriously. I would bring two props; a baby bottle and a small teddy bear. This would illustrate the common use of baby’s but they would be place very different and have a darker lighting.

My next final would be base on another youtube video is about an artist name Cyrain.she explains about how to get recognized as an artist on social media. Which is a huge problem with plenty of new artist who want to be freelance. This would be a positive message of the images For social Media as an artist.
1. The tone of this image would be light and positive
2. This image would be a literal message
3. The image would have a little of both still life and a model
4. it doesn’t matter who is model just borrowing a hand
5. The objects is my sketchbook and my Instagram on my phone
6. I would use lights of bright light
7. This image would be bright and also show shallow depth of field

What i chose for my final project wasn’t an article but a very insightful interview with Will smith on Beats 1 radio. Basically it was about him getting back into the music industry after 10 years and basically his thoughts and how he is going to handle that. It turned into a interview about the fears of living. In his case he had a certain amount of success which should have taken away the feeling of fear but it doesn’t it makes it that much harder to try something new not knowing if it will make or break you like many people today. Fear of trying to do something is what hinders us to creating something. Its the fear of failing. You have to believe that you can do what you set for yourself what ever it may be. Its as simple as knowing what that goal is, and willing to die to see that goal happen. Don’t be afraid to fail because failing is what makes us better not hold us back. If we fall we have to pick ourselves up and keep moving forward otherwise we will stay on the floor as people pass us.

I have two different approaches that deal with the same metaphor of falling but getting back up. One is with a single subject on the ground their face is unclear but you can see a smirk on their face. Second approach i would like to be basically the evolution of man but it goes both ways. One way the subject stays in the same position, but the other way they stand strong.

For my final project i’m going to base my photos from an article called Coffee addiction: Do people consume too much caffeine? . This article goes over one of the most consumed beverages in the world, coffee (more specifically caffeine). It mentions how people are starting to try and find any adverse effects in the things we most often consume; one of which is caffeine. The article goes on to say that the amount of people that have needed emergency treatment after consuming energy drinks has doubled to more than 20k in 2011 even though energy drink companies claim its safe. It also mentions that a study shows that up to six cups of coffee a day is still a very safe range to be in. It goes on to say that many of history’s greatest minds consumed ridiculous amounts of coffee. The article concludes by saying that ultimately caffeine will effect everyone differently and that you need to decide for yourself what levels are safe. 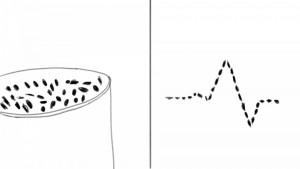 For the final project, I would like to base my photographs off of the story, Birdie Num-Num by Lavanya Sankaran. This story is about Tara Srinivasan, her mother, and their very different point of views regarding Tara’s future. While Tara is visiting her parents in Bangalore, India, she is focused on completing her PhD. Her mother, however, has other plans for her. Tara is now 27 years old and she doesn’t even have a significant other in her life. Since Tara has no intention of fulfilling her mother’s wishes and getting married anytime soon, Mrs. Srinivasan takes matters into her own hands. Mrs. Srinivasan plans a cocktail party to market her daughter to potential buyers, which she refused to admit to Tara, claiming it was just a warm homecoming party in her honor. All of Mrs. Srinivasan’s friends had grandchildren, she was the only one without grandchildren and an unwed daughter. Whatever selfish reasons Tara had for not wanting to get married, she had to realize that none of that no longer mattered. More than enough time had passed, it was her duty and obligation as a daughter to give her mother what she wanted most – grandchildren. This was the way it had always been, it was all Mrs. Srinivasan knew – it was all part of the social contract.

“Birdie Num-Num” is an ideal representation of parental expectations, traditional gender roles, and perhaps most importantly – societal pressures. For each photo shoot, I would like my subject to represent the point of views of both Tara and her mother. 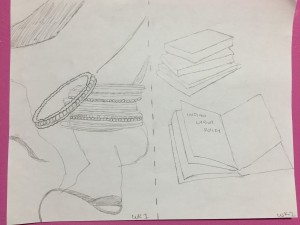 1) The mood of the first photo shoot is bright, happy, colorful, typical of a wedding. The second photo shoot is more serious since it represents Tara’s focus on completing her thesis for her PhD and what she would rather be doing.

2) Both of my approach is pretty literal instead of metaphorical because it is easy to interpret.

3) My approach will be a still life. I would prefer if my pictures had a sense of mystery to them. By not having models in my photographs, I think it makes viewers wonder whether not someone is getting married or whether or not someone is making use of these books and studying.

6) I would prefer to use brighter, even lighting for the first shoot. For the second shoot, I would like the lighting to be a little more moody.

7) I’d like both photo shoots to be shallow depth of field.