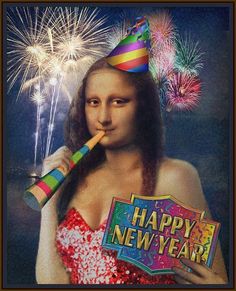 If you have not yet checked, final grades are posted to CUNYFirst and Blackboard. Enjoy winter break!

After reading the article by New York Times, I do believe the Mona Lisa should be located somewhere other than the Louvre because if one painting is causing so much chaos then that becomes a problem to the staff and the tourists. If you have to crowd around one picture like you’re at a concert then going to the Louvre to see The Mona Lisa is not worth it. They should give The Mona Lisa it’s own building away from the Louvre just the minimize the crowding. There is other important works of art at the Louvre that people should be focusing on not just The Mona Lisa.

In my opinion, I think that the Mona Lisa is an evergreen work of art, so it should not be kept hidden from the world. By reading the NY Times article I found out that most of the visitors at the Louvre come to see the Mona Lisa only, but they leave disappointed and also I read that in a poll about 80% of British people think that it is the “world’s most disappointing attraction”. I think they are not saying this based on the look of the work of art itself, they are only giving this bad rating because of the long lines and overcrowded halls that they had to experience in the process of viewing it.

I have been studying about this work of art by Da Vinci since I was only in 3rd grade or nine years old, in India. So you can understand to what extent people around the world must be curious to see this work of art in person! Mona Lisa is not the problem in my opinion, as many people really want to see it, its not like its an obligation to go and see it if you visit the Louvre, People go there because they actually want to see it, but they want to see it in from close, because honestly we all should get to see the art in order to appreciate its beauty in the first place! People don’t seem to value it anymore because this is what they think, “So you’re telling me that, I will have to stand in a longggg line to see that painting which I practically can’t even see from near? and on top of that I will have to be waiting for about an hour in a hall crowded as hell? No way!! Who has time and patience for all that?”

So I think its not the fault of the Mona Lisa, its not that its something which is not worth the hype, its just that people feel robbed (in terms of experience and money both) as they travel from all different parts of the world, spend so much money to see this specific work of art at the Louvre, but the terrible viewing experience that they get is what breaks their heart and they feel like they are not getting something worth their buck and time!

So to solve this problem, I would suggest that the painting should be moved, but NOT in a storage or something as it would be equivalent of disrespecting this art piece, instead they should actually build a separate area for just this painting so the rest of the Louvre visitors can watch other works of art at peace and also Mona Lisa lovers get to see the art from near and get to take cool pictures around it or with it!

Based on the authors view on the Mona Lisa in this article, I agree that the Mona Lisa should be taken elsewhere, yes it’ll be taken down from one Museum but with the popularity, the Mona Lisa has, with very little reason as to why for many, it seems reasonable for the painting to have its own place and let other artworks shine. Along with possibly being able to satisfy many more people who go to see the painting and for those that want to enjoy the other artworks on display without being completely bombarded by crowds of people who only want to see a single painting.  Along that being place into storage will cause more upset people and who knows what the outcome could result in therefor having the Mona Lisa in its own place away from the museum results the best.

Ok so, what what I got from the article was that the Louvre was operating above max capacity, and it can no longer sustain the foot traffic, especially if its projected to grow by ten percent every year going forward. The author also said that  eighty percent of the people visiting the Louvre are there to see the Mona Lisa, if that’s the case i totally agree with the authors suggestion the move the Mona Lisa to its own facility. It would much safer, and people there to see art other than the Mona Lisa, and locals when want to see newly added exhibitions don’t have to get caught up in the Half hour Mona Lisa TSA line, and can enjoy the museum.

After reading the article I believe the Mona Lisa should be taken down and relocated to somewhere else. The Mona Lisa is taking the attention away from the other artworks in the museum. According to the article most people who goes to see the Mona Lisa leave unhappy. The best way to prevent people from overcrowding one read in the museum is to relocate it to somewhere else. According to the article, “The overcrowding was so bad, the museum had to shut its doors on several days.” This proves that it became so hectic they needed to shut down the whole museum. Therefore the Mona Lisa should be taken down and relocated.

The “Mona Lisa” is a widely known artwork. However, it’s gotten to a point where the painting becomes overrated and becomes much more than what it may seem. As iconic as the art piece is, along with its creator Leonardo da Vinci, it should be seen for people who actually have a strong and passionate feelings towards artwork. In the article, the author mentions how the Louvre’s other artworks are overshadowed and gets depreciate by the “Mona Lisa”. In my own opinion, I agree with the author of the article and feel as though the “Mona Lisa” should be to relocate to a place where it does not take the charm of other artworks and create an atmosphere where people who love art and want to view such an iconic piece in peace without the line being so tremors and houses more than 5,000 people in one place. There are plenty of other beautiful artworks to be seen and appreciated that is not as well known. Moving the “Mona Lisa” to a place where it stands alone and not with other art works, leaves customers who wanted to just see the paint by itself satisfied, along with other art lovers being able to appreciate the painting, while also appreciating the rest.

In my opinion, I don’t believe the Mona Lisa should be put in storage. The Mona Lisa painting is iconic. Everyone wants to catch a glimpse of that ‘Mona Lisa’ smile up close and personal where all the details of the painting can be seen. I remember in class a student had mentioned that in her hometown of India, she was learning about the Mona Lisa as early as elementary school – that just shows how real the hype is over Mona Lisa, she’s popular all over the world. I understand how the painting could serve as a security hazard in the Louvre, however, the Museum’s director has said that they will be taking further steps to alleviate the pandemonium that this painting has been causing with new entrances and timed tickets. I believe that anywhere the Mona Lisa goes, there will always be large crowds, there’s no way around that so the painting should just stay in the home that its always known – the Louvre.

. Do you think it’s time to put the Mona Lisa in storage? Or perhaps move it to its own space outside of the museum?

I believe that people can enjoy the art they view if they want to. Personally,  I don’t understand all the hype about the Mona Lisa, Comparing the Mona Lisa to other works in the renaissance, I feel as if it could easily get lost or outclassed. However, that is only my opinion. I don’t think people have the right to take away from someone’s experience of how they enjoy art. Not everyone likes the same music, watches the same shows or enjoy the same art. If people want to travel around a world just to see the picture let them. It there freedom to enjoy what they want.

In regards to my feelings about the Mona Lisa, i’m not that passionate about it. I recognize it as an iconic art piece that stands out from its time as well as the fame of it and its creator. However, it is kinda staggering to see how blown out of proportion the art work is. In the article the Mona Lisa’s presence alone devalues the other art present in the Louvre and creates a mess of problems for the museum and visitors. In my opinion, I agree with the article and feel that the smartest thing to do would be to relocate the painting to its own housing/exhibit area so that it doesn’t negatively affect all the other valuable work in the world and can maybe someday be recognized as something not all that.