The “Mona Lisa” is a widely known artwork. However, it’s gotten to a point where the painting becomes overrated and becomes much more than what it may seem. As iconic as the art piece is, along with its creator Leonardo da Vinci, it should be seen for people who actually have a strong and passionate feelings towards artwork. In the article, the author mentions how the Louvre’s other artworks are overshadowed and gets depreciate by the “Mona Lisa”. In my own opinion, I agree with the author of the article and feel as though the “Mona Lisa” should be to relocate to a place where it does not take the charm of other artworks and create an atmosphere where people who love art and want to view such an iconic piece in peace without the line being so tremors and houses more than 5,000 people in one place. There are plenty of other beautiful artworks to be seen and appreciated that is not as well known. Moving the “Mona Lisa” to a place where it stands alone and not with other art works, leaves customers who wanted to just see the paint by itself satisfied, along with other art lovers being able to appreciate the painting, while also appreciating the rest. 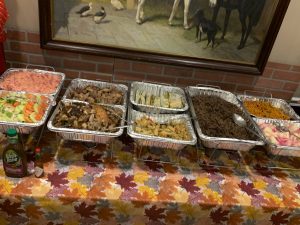 For my family thanksgiving, we always have a combination of hispanic food for the main courses and more American type desserts (Which are not shown). Because I’m allergic to eggs, everyone is kind enough to be careful with the food choices, but could never get rid of the potato salad, it a must every year

The Notre-Dame Cathedral is very widely known and a common tourist attraction, along with its beloved history and cultural aspect to Paris. As it is a tragedy of the fire that had happened to the cathedral, this leaves room for some open ideas to the nexts steps of rebuilding. After reading both articles, both the writers make very valid points as to why each views the rebuilding as the same gothic style or to make something new. I believe that the Notre-Dame Cathedral should have certain aspects of what made it unique, such as the beautiful stained glass windows, along with the interior have a gothic feel with modern touches to bring it to life. Also, at the rooftop of the Notre Dame Cathedral, there should be something to be interactive with the community. Whether that maybe a mini museum of what was left of the past Notre Dame Cathedral, or a café to take in the beauty of where you are the beautiful aspects of the gothic style of Notre Dame Cathedral. This enables the new generation to be more intrigued with architecture and the culture it brings.

Commodus was a Roman emperor, and just along his bust (“The Bust of Commodus”), it was designed to be sculpted to give off the appearance of masculinity and dominance, as he wanted to be seen as Hercules. The sculpture has Commodus holding fruits with his left hand, while a club in his right hand, resting on his shoulder (Which the club representing gladiator matches he would partake in, or the other killings he has done. While the fruits could mean the “giving” he thought he had done as being a Roman emperor). Along with wearing a headpiece that resembles a lion (which also represents power and/or strength). I viewed it as Commodus abusing the power he had and getting the respect he thought he deserved and becoming egoistic. However, with the brutal pain he brought when he was an emperor, as based on the Lampridius’s biography “Historia Augusta”, Commodus was sinister and conceited and in the biography stated that for his amusement he would have cut open someone who was obese, down the middle of his belly; This is so that his intestines would fall out and Commodus put a starling on the head of a man who had a few white hairs which resembled worms and it caused his head to fester through the continual pecking of the bird’s beak. Commodus would slaughter thousands just for his own entertainment. Killing thousands of innocent civilian lives to show that he was superior and almighty to his empire. In the final analysis, the view of the bust is different than I first thought of it to be, Commodus led his life to be violent and destructive to the whoever went against him or questioned his authority.