Question 1: Write about an exhibit, artist, or specific work of art that exemplifies illustration as a communications design.

The artwork below by Arthur Ignatius Keller exemplifies illustrations as a communications design because the painted picture is definitely reflective of a part of history from the 1900s. When I look at this picture, I see society with several underlying themes: religion, economic status, love/family. Based on the two women wearing burqas, this tells me that there are some Muslim roots. The style of hats that the 2 guys (walking in front of the women with the burqas) are wearing is from Middle Eastern/African origin (perhaps Morocco). The majority of the people appear to be impoverished. I also see a soldier or military commander speaking to one of the natives which is suggestive of a European presence and some type of turmoil (because soldiers from another country wouldn’t be  roaming the area of a foreign land for no reason). Furthermore, the people all have dark complexions except the officer who is lighter in complexion which can draw from several references in history, where Europeans went to Africa and other parts of the nations for exploration and exploit. 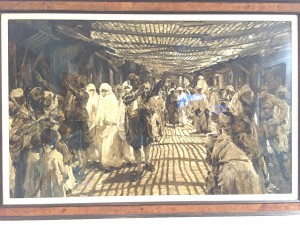 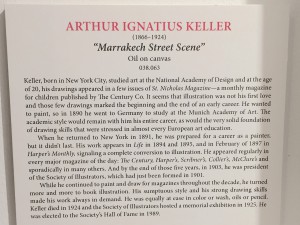 Illustration communicates ideas differently from graphic designers in that the main format used to convey these ideas is different. Illustrators express their ideas though drawing more than do graphic designers who tend to design structures etc using computers and other technology aid (they don’t as much drawing as illustrators).

Question 2: Write about a exhibit, artist or specific work of art that serves as a good example of illustration as storytelling. 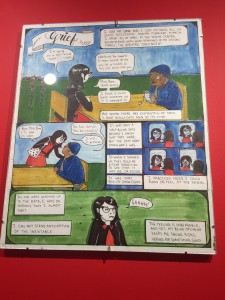 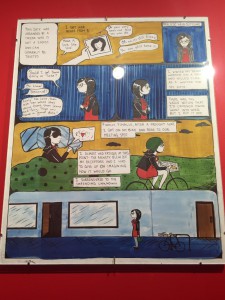 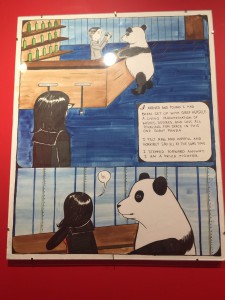 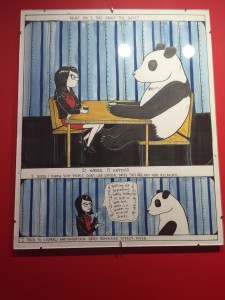 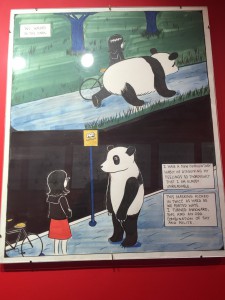 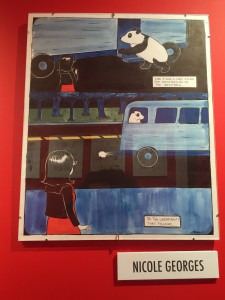 The exhibit above caught my attention mainly because of the relatable storyline. The story is about the dilemma (insecurities) a young woman faces right before her “half” blind date (she knew who her date was but the date had no idea it would be her). She is nervous and expresses  some uncertainty about herself – whether she is good enough for her date, if it will be awkward once her date finds out who she is, and most importantly, will everything run smoothly? She seeks some advice from an elderly friend but it’s not necessarily what she wants to hear. She later goes on the date and her skepticisms turned out to be all true – the date was indeed awkward because of her own awkwardness and low self esteem. One could tell that the storyline happened in a course of a few days because there was daylight in the beginning scene, to a scene with her laying in bed (night), and then reverts back to a new day because her hair is fresh and she is ready to meet with her date. This could have possibly be a real life story -something that happened to the author, Nicole, because I find it ironic that she used the image of a bear to be the date. I think she wanted to show the readers how incompatible they were from the beginning more so than her wanting to disclose the identity of her date. Also, the bear that was drawn does not suggest a gender which makes the reader question whether her date is a male or female. The whole layout of the drawing gives a comic book feel – the text used and the placement of the words is similar to what one would see in a comic book. Also, the letters all caps so everything was uniform which made the reading fluid. It was easier to go from one scene to the next – sort of like reading a book – the images are just an added bonus.

Question 3: After visiting the museum, list 3 overarching themes that appear to tie together the works featured here today (for example, satire, absurdity, perspective).

Three themes I observed were cynicism, sarcasm, and justice.

Cynicism: The pieces of art below convey this theme. They show the greed that people in high position have – everything they do is with their own self interest. The first picture is showing that this politician will embrace anything as long as he is getting his cut. The second set of pictures called the “Birds of Hollywood” I think also illustrate this because in the last picture the bird with the cigar most likely mistreated one of its [potential] workers.  The same thing goes for the second picture- a smaller bird is lying lifeless on the flow next to the ‘big wig” sitting on the branch. People with self interest will take advantage and hurt whoever they have to, to remain on top. The bird in the red suit has his chest held high which conveys pride and power. 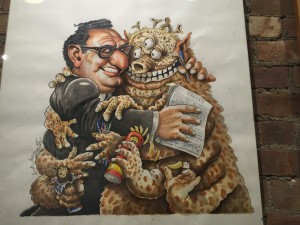 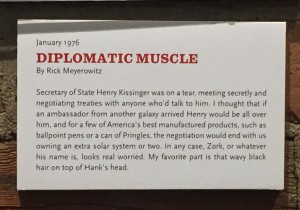 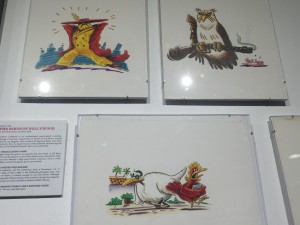 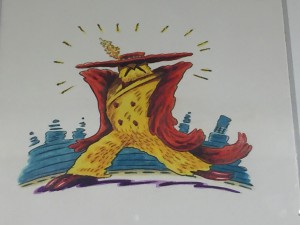 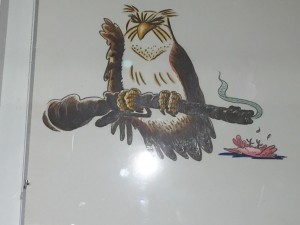 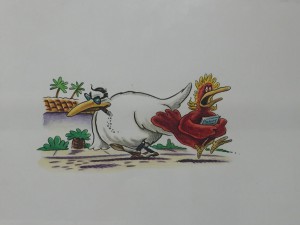 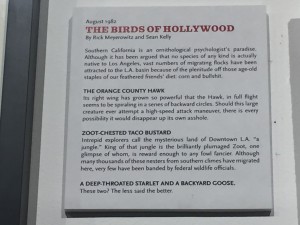 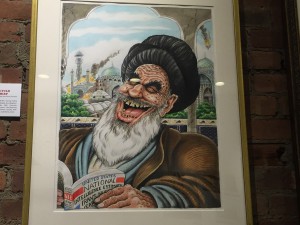 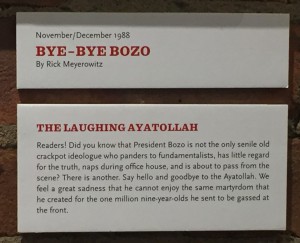 Sarcasm: The first picture, Mona Gorilla is clearly a parody of the Mona Lisa piece. The second picture is of a boxer beating himself up literally – there are times when we feel so bad about something and we beat ourselves over up it mentally. The artist decided to portray it in a sarcastic way which gives it a realistic feeling. The other art pieces convey similar sarcasm. 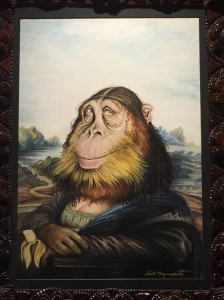 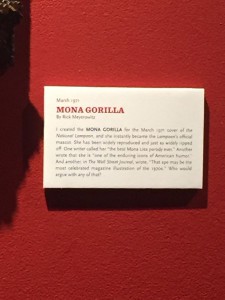 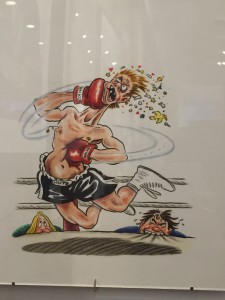 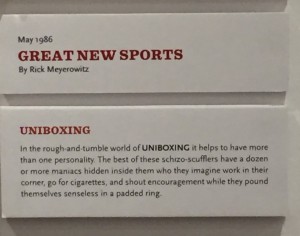 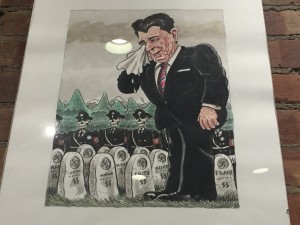 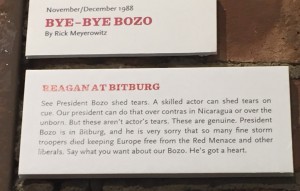 Justice: The fight for human and in women rights in particular is a them I noticed in some of the art pieces. In the first picture below, there is a man stealing “seats” from the women. I think the man in this piece represents society – especially since this is a male driven world. The second picture shows a bunch of angry women fighting back for their rights. There are guys with their pants half down which conveys the message that some men have taken advantage of women both physically and mentally and the women are rising up as a force to take back what is theirs – by no means necessary – if they have to fight back, then that’s what they will do. 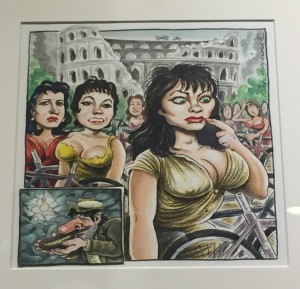 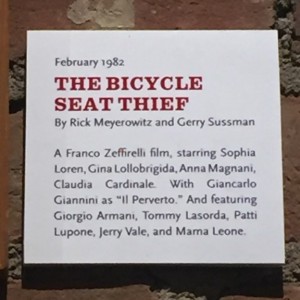 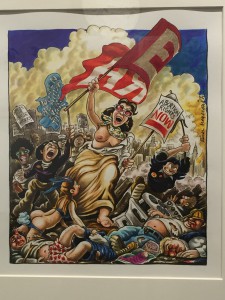 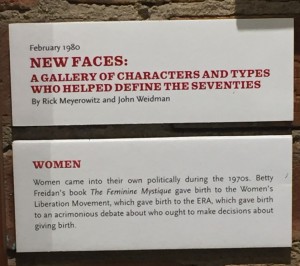