Assignment: Inspired by film-making that documents “the strangeness and beauty of the ordinary—of everyday lives”, your assignment is capture a moment in a day, through a collection of shots that will amount to a 5-7 minute short film. Communicate a theme of your choice by picking one word to focus on as the subject.

The word I chose to communicate as a theme in this video project is “Journey“. However, this was not my original one-worded theme. The original word was “travel” and I attempted to illustrate it in my storyboard below. When I thought of the word “travel“, I immediately started thinking of the places I went, and the transportation I used to get there. I also knew that I wanted to somehow use foreshadowing to indicate the various changes from scene to scene. In the first image, I am sitting by a window, recording something outside (this would later be incorporated in the actual video). The second image is of an airplane landing/taking off. I went skydiving sometime ago and wanted to incorporate that as a place I went (which would be the sky- literally). The third image is that of the inside of a car and demonstrates the idea that I travel by car. The last image (bottom right) is of a train pulling into the station. I commute daily by train and wanted to incorporate that into this project. In summary, this storyboard communicated some of the ideas I had, that I wanted to tie into the theme of “travel”. 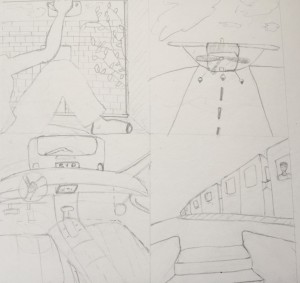 As the saying goes, life does not always happen as you want it. I unfortunately was unable to add video clips from my skydiving trip so that idea was completely thrown out. In my finalized video project below, although I stayed within most aspects of the storyboard and expounded a bit more on the concept in each image (excluding the second image of the plane), the video took a bit of a turn.  I realized that even though my concepts above were good, they were incomplete and did not completely summarize “life in a day”. As a result, I decided to start recording from the moment I woke up in the morning until the time I reached home at night. I therefore added a few more aspects of my life (such as the laundry scene, school, and “hang time” with friends). I also wanted to depict several underlying themes such as time and patience.

While compiling the clips and putting everything together in iMovie, it became apparent to me that this was more than just traveling, it was a journey. From waking up, to taking the train, to laundry, to back home again, it was all a journey – a journey from one place to the other. I was on a mission and every step that I took, or mile that I drove, was a part of a journey I decided to embark on from the time I woke up, till the time I said saying goodbye.

I used special effects such as “x-ray”, “raster effect”, “fast forward”,  etc at certain points of the video so that nothing would be monotonous. For the audio, I chose two of my favorite instrumentals – “Indian Summer” by Jai Wolf and “Requiem for a Dream” by Escala. I felt that “Indian summer” gave off a vibe that is suggestive of movement. The second song I specifically placed it at the ending because it had a very (what I thought to be) profound crescendo. Also I wanted to continue to play on my foreshadowing idea, so I felt that the placement of that crescendo  would give the idea that something is about to end or coming to an end (which it was).