William Cullen Bryant was born on November 3, 1794 near Cummington, MA, but moved with his family to a new home when he as just two years old. He developed an interest in poetry in his youth, but unable to finance a Yale education, he was guided to pursue a legal career. He studied law in Massachusetts and was admitted to the bar in 1815. On January 11, 1821, Bryant married Frances Fairchild. From 1816 through 1825, he practiced law in Great Barrington, MA, but moved to New York City in pursuit of a literary career. In late 1825, he became editor of the New-York Review. He also moonlighted with the New-York Evening Post where he rose to the position of Editor-in-Chief and later co-owned the newspaper.

Over the next few decades, Bryant became one of the more liberal voices of his time. He was and early and avid supporter of organized labor, defended religious minorities and immigrants, and promoted the abolition of slavery. He plunged into the foreground of the battle for human rights and continued to speak out against the corrupting influence of certain bankers in spite of numerous threats to his financial status.

He died in 1878 of complications from an accidental fall he suffered after participating in a Central Park ceremony honoring Italian patriot Giuseppe Mazzini. He is buried at Roslyn Cemetery in Roslyn, NY. 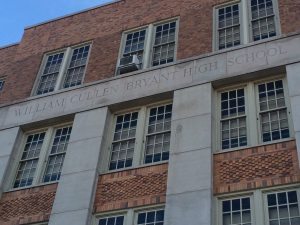 In his Give Us the Ballot speech, Martin Luther King Jr. quoted Bryant saying “there is something in this universe which justifies William Cullen Bryant in saying: [Truth crushed to earth will rise again.]”

Bryant is memorialized in several ways and in different locations within New York City. His name is born by Bryant Park, which is adjacent to the New York Public Library. Also, to further honor his contribution to New York, a public high school located in Queens, NY was named after him. 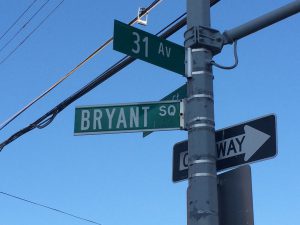 The street sign located in front of was is now known as Bryant High School bears the name of this outstanding New Yorker.

James Marcel Cartier was a happy go lucky Local Union 3 electrician assigned to a job at the World Trade Center only two weeks prior to the attack.  A hard worker, he never took the easy route.  He was happy on returning home dirty, which meant that he worked hard.  Prior to becoming an electrician, he work numerous local jobs, among them a stationery store, a pizzeria, a drug store, and he was found many times behind the counter of a local deli. 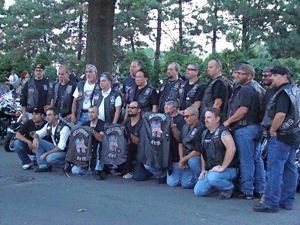 He lived in Astoria, Queens and was well known and liked in the neighborhood.  One of seven children, his happy disposition, his love of family and friends, was well known.  He graduated from Msgr. McClancy High School in 1994.  He was liked dearly among his fellow student and teachers. 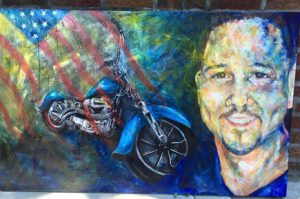 The day of the attack, and true to his way of putting his family and loved ones before himself, he called his brother John; a call that saved his sister’s life.  His last words were relayed to his parents via voicemail.  He said “I love you”. 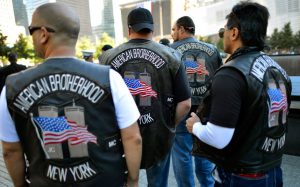 John’s name is inscribed among the many in the World Trade Center Memorial.  Several paintings were created by local artists to commemorate his life.  His older brother John took a different path to keep James’ memory alive.  Both avid motorcyclists, John founded and continues to preside over the American Brotherhood motorcycle club.  Their colors bear the twin towers with James Cartier’s initials displayed on the South Tower. 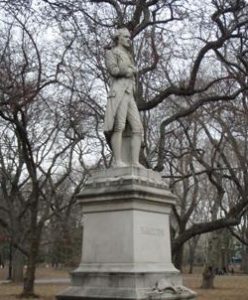 Hamilton was born in the British West Indies, and moved to New York in 1772 to attend King’s College, known now as Columbia University. As a teenager, he volunteered for service in the Revolutionary War in a New York artillery company.  There he rose to the rank of captain.  Hamilton later served as a confidential assistant to General George Washington as a Lieutenant Colonel.

In 1780, he married Elizabeth Schuyler.  In 1782 he was admitted to the bar and began to practice law in New York. He was also a delegate in the Continental Congress and played an important role in the ratification of the United States Constitution in New York. He co-authored many of the Federalist Papers and, he was appointed the first Secretary of the Treasury by President Washington. While holding this position, Hamilton’s concentration on business aided the growth and development of New York City as a financial center. 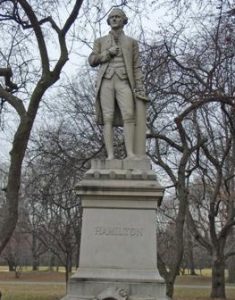 In 1800, he started construction of his country home in the neighborhood that later became known as Hamilton Heights. Hamilton died in 1804 when he was fatally wounded in a duel with political rival Aaron Burr.  He is buried in Lower Manhattan’s Trinity Church cemetery.

The statue located on East Drive, opposite of East 83rd Street, depicts Alexander Hamilton as a distinguished political figure of an emergent United States.  Hamilton’s son, John C. Hamilton, donated the piece to New York City in 1880.  The monument is unusual in that it is carved entirely of granite.  The thirteen stars above the monument’s pedestal represent the thirteen original colonies, and convey Hamilton’s patriotism and service.

Henry Ward Beecher was born on June 24, 1813, in Litchfield, Connecticut.  The eighth son of a prominent minister Lyman Beecher, Henry became a celebrated preacher who emphasized God’s love rather than God’s punishment.  He died on March 8, 1887, in Brooklyn, New York.  Like his father and brothers, he attended Lane Theological Seminary in Cincinnati, Ohio, where his father was president.  Beecher’s first parishes were in Lawrenceburg and Indianapolis, both in Indiana. During his tenure, he became a captivating speaker and antislavery activist. 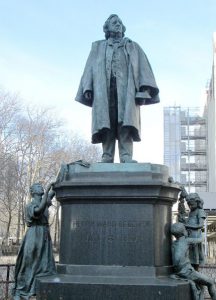 In 1847, Beecher became minister of the newly founded Plymouth Church in Brooklyn, New York.  He was describes as possessing an “odd combination of western informality, eastern education, and unabashed showmanship.”  These qualities helped lead to his fame and influence.

As tensions increased between North and South in the years leading up to the Civil War, he spoke out against slavery, using his role as minister to spread his views.  He staged slave auctions at his church to convince his congregants to donate enough money to buy freedom for enslaved people being sold. In the 1850s, Beecher corralled resources and weapons for the abolitionist settlers engaged in combat to keep the affiliated territories free of slavery.  The guns became known as “Beecher’s Bibles,” because they were shipped in boxes labeled “Bibles.”  In 1863, Beecher traveled to England to present five speeches about slavery and its abolition.  President Abraham Lincoln was so certain that Beecher’s speeches had influenced the outcome of the war that he sent him to Fort Sumter, where the Civil War began, to raise the United States flag after the South surrendered.

Over the years, Beecher supported other reform movements. He aided women’s suffrage and spoke out against the Chinese Exclusion Act of 1882

Born on May 2, 1871in Cobourg, Canada, Duffy relocated to New York in 1893 to teach French at what is now known as Xavier High School.  In 1896 he was ordained as a priest and accepted a faculty position at St. Joseph’s Seminary located in Dunwoodie, NY.  He remained there for the next fourteen years.

Father Duffy began his military service with the Fighting 69th Infantry during the Spanish-American War of 1898 where he served as First Lieutenant and chaplain.  World War I found him earning a number of medals while serving in Europe with the famed Rainbow Division.  He is the most highly decorated cleric in the history of the U.S. Army; among which awards are the Distinguished Service Cross, Conspicuous Service Cross, and the Distinguished Service Medal. 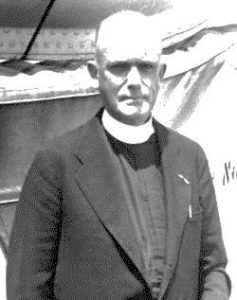 Post war, Father Duffy returned to New York where he served as a pastor at the Holy Cross Church until his death on June 27, 1932 at the age of 61 years.  In 1927 he ghost-wrote a thoughtful article dispelling anti-Catholic notions of religious freedom and freedom of conscience with respect to political norms at the time. 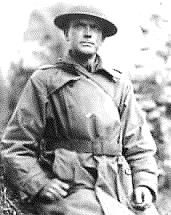 Today, we pay homage to this extraordinary man via a stoic statue in the northern triangle of Times Square.  Known locally as Duffy Square, it is home to the bronze portrait of the military priest depicted as a uniformed soldier, standing tall in front of a granite Celtic Cross, with a helmet at his feet and a bible in his hands. 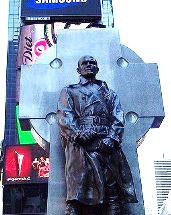 Frankly, I found this tribute a bit burlesque.  Father Duffy served honorably when called to arms during times of war, and further, the Times Square district for a number of years as a priest.  That said, placing an icon depicting a humble and discreet man in the middle of such a heavy tourist area appears more commercialized and less effigial in nature.  Additionally, since the statue portrays him as a soldier, we should note that Father Duffy’s namesake is already commemorated at Camp Smith’s Spiritual Fitness Center; a New York Army National Guard installation located in Cortland, New York – a more appropriate tribute. 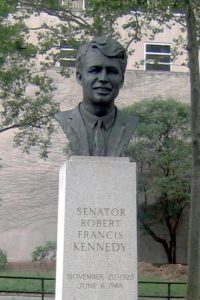 Robert Francis Kennedy was born in 1925.  He was the third son of Joseph Kennedy, the patriarch of the very powerful Kennedy family. His older brother, John Fitzgerald Kennedy served as the 35th  President of the United States.  Robert “Bobby”  Kennedy served in his brother’s administration as the United States Attorney General. After John Fitzgerald Kennedy’s assassination in 1963, Robert resigned from office and moved into an apartment at the United Nations Plaza in Manhattan.  Although he was accused of being a “carpetbagger,” Kennedy mounted a successful campaign for the United States Senate in 1964.  After speaking out against the escalating war in Vietnam, he ran for president in 1968.  He was assassinated on June 6, 1968 while campaigning in Los Angeles. This sculpture was relocated and placed in a picturesque surrounding as a result of renovations to Columbus Park, completed in 1994.

This bronze bust, located near the footsteps of the Supreme Court of King’s County in Brooklyn’s Columbus Park, represents Attorney General, United States Senator, and Presidential candidate Robert Francis Kennedy (1925-1968). The piece was sculpted by artist Anneta Duveen and dedicated in 1972. It features a polished granite pedestal with four quotes from Kennedy inscribed on the base as a means to inspire community action, whether it be at the local, national, or global level.

“Few will have the greatness to bend history itself, but each of us can work to change a small portion of events, and in the total of all those acts will be written the history of this generation.”

“What we require is not the self-indulgence of resignation from the world but the hard effort to work out new ways of fulfilling our personal concern and our personal responsibility.”

“All great questions be raised by great voices, and the greatest voice is the voice of the people – speaking out – in prose, or painting, or poetry, or music; speaking out – in homes and halls, streets and farms, courts and cafes – let that  voice speak and the stillness you hear will be the gratitude of mankind.”