1. Personally, what I found most surprising is the fact that most of their artistic work is outsourced to other studios. I can’t imagine why a game-designing studio would have some sorta in-house artist, but it sort of affirms the belief in have for new York in terms of art jobs. I’m considering moving to California.

3. Yes, as I mentioned before, the fact that studios in new York  (at least the few I’ve been to) only either outsource or get overflow work means I have to seriously consider where I’m going to seek gainful employment. As a 3d animator/modeler, maybe New York isn’t the place for me. At least if I want to work in anything other than advertising or apps. 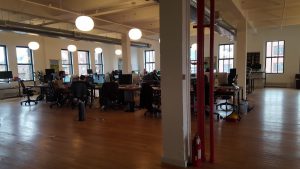 A shot of the workspace within the studio. It seems very open, as opposed to the standard claustrophobia-inducing cubicles. Which is a plus. 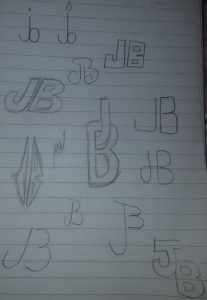 I started with a bunch of random sketches of my name, taking it in no direction or the other. I found it a little difficult to get very creative with the initials “JB” without them looking too much like “BJ”, which…is something I wanted to avoid entirely. 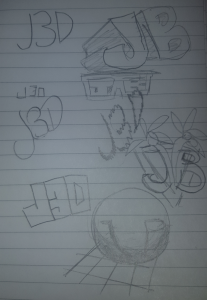 I started noticing that the B could easily be replaced with a 3, and could then incorporate my core focus of study, 3d modeling. So I decide to play around with the initials J3D. I’m also a big fan of 80’s aesthetic, and you can see a little bit of that here. 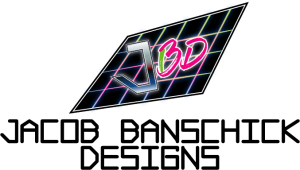 My first design. I borrowed from a few of the design ideas I’d sketched out, including that graph-like field you’d see in a lot of 80’s video games that simulated a 3d space. I thought it came out pretty well, but as my processor pointed out, it would make more sense to incorporate the back end of the J in place of the green stroke I’d used to make the 3 into a B. Sort of embarrassed I didn’t think of that myself! 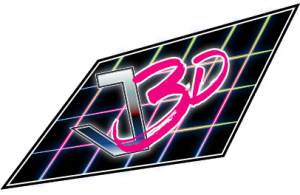 Finally, I ended up with this completed design. I merged the J and the 3 together, which still maintains the Illusion of the B. Also, I tweaked the D on the end to be more uniform with the final design. Al in all, I’m pretty satisfied with the final result.

I wanted the line “I never asked for this.” to have a sort of melancholic interpolation. Its the phrase we find ourselves repeating in our head daily, when faced with the hurdles of everyday life. How did I get here? Why did my life turn out this way? Where do I go from here? 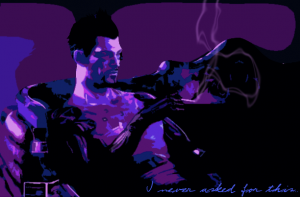 Here I’m showing Adam Jenson, the speaker of the line. in a sorta bluesy depiction. I posterized the image, applied a cardboard cutout filter, redrew the smoke trails, and removed the background. Then I played around a bit with the image levels, and shifted the hue around. After a day of bashing heads and shooting terrorists, he enters a state of malaise; reflecting on what his life has become. 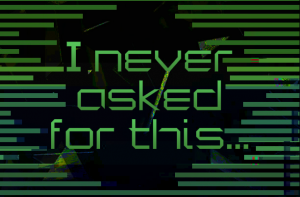 Here, I’m someone being awoken forcibly, seeing in a perspective unfamiliar to them. Here I grabbed random background for some noise and distorted the hell out of it. Then I threw some bars along the edges. I took the whole image then, threw it into a corruption generator, then added the lines over the whole new image. In sort of the same vein, I was picturing something like Alex Murphy awakening for the first time in his new body, now a tool of the police force. For those of you unfamiliar with robocop, think Darth Vader rising from his medical bed after learning his wife is dead. For those of you unfamiliar with Star Wars, I pity you. 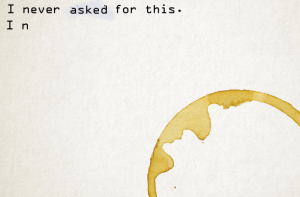 Finally, this last one I feel might be the most relateable. I didn’t do much, just took a paper texture, applied a coffee stain, then played with brushes to depict a sort of whiteout effect. This was meant to depict the page of a writer who, not only can not muster the energy to grab a fresh sheet of paper, he cant even finish writing.